Tesla is good at creating hype without advertising and the Tesla Pickup truck is no exception as it overtakes the Ford F150 as the most talked about pickup truck in the US.

We have been talking about Tesla making a pickup truck for a long time, but things have intensified over the last year.

Tesla’s CEO has sought suggestions for features to add to the Tesla truck under development and he revealed some planned features, like an option for 400 to 500 miles of range, Dual Motor all-wheel drive powertrain with dynamic suspension, as well as ‘300,000 lbs of towing capacity’.

The automaker also released a teaser image of the Tesla pickup truck, which they plan to fully unveil later this year.

More recently, Musk even said that the Tesla Pickup truck will cost less than $50,000 and ‘be better than a Ford F150’.

The Ford F150 is currently the best-selling pickup truck in the US and it was also the most talked-about until now.

AutoWise looked into geotagged Twitter data of over 100,000 tweets and found that the Tesla Pickup is now a more popular subject than the F150:

“The Ford F-150 is currently the most popular truck in every state, but when put up against the upcoming Tesla pickup truck… it is defeated at a count of 26 states to 24. With most of the Tesla support coming from the West Coast and Upper East coast. The south holds all the support for the Ford F-150.”

Here’s the map of the Tesla pickup truck interest versus F150: 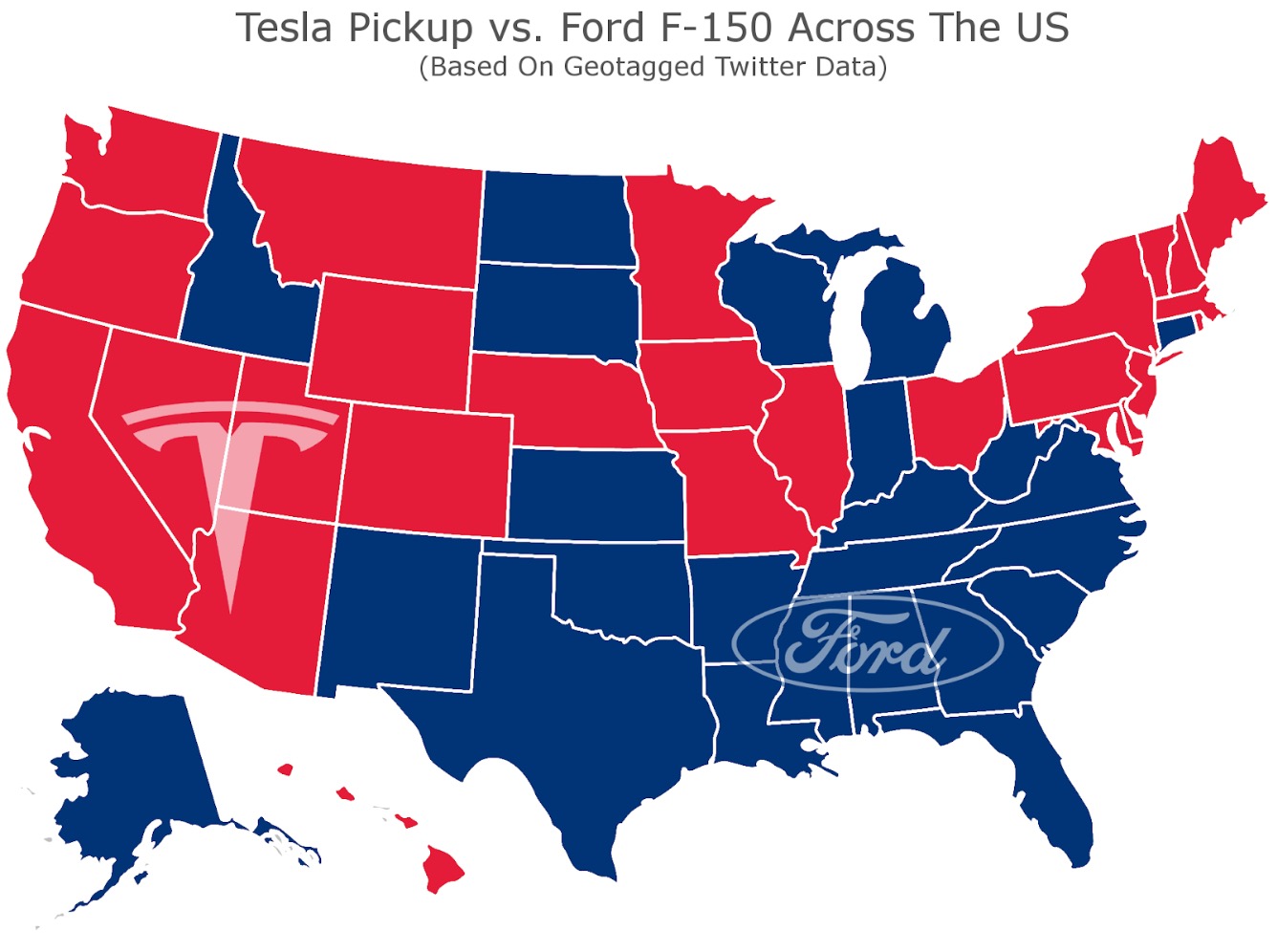 It’s not exactly surprising. Tesla is extremely good at creating hype. The best example is that over 100,000 people reserved the Model 3 before even seeing the car.

The most difficult thing is to transform the hype into actual sales when the vehicle enters production.

I think this will be particularly difficult with the Tesla Pickup truck based on Elon’s comment that it will look very futuristic and different from what truck buyers are used to.

The unveiling later this year will definitely increase the hype because if that thing is strange-looking, that means eyeballs, but it doesn’t necessarily mean that many people are going to be willing to buy it.

However, I am not worried because if there’s something that Tesla almost always delivers on, it is the specs, and Elon is promising some crazy good specs for this truck.

I think more people will buy it for that reason than for what it looks like, which could still be cool by the way. We just don’t know yet.