Juiced Bikes, the California-based electric bicycle company known for a wide range of high power electric bicycles, has announced that every bike in its lineup now comes with a 52 V battery option.

The original CrossCurrent S2 bike was the last holdout, but it too now gets the higher voltage battery matching the power level in some of its other high performance e-bikes.

According to Juiced Bikes founder and CEO Tora Harris:

“Let’s face it, when it comes to e-bike performance, consumers are interested in speed, power, and range. And a 52-volt battery is essential for fueling a truly elevated e-bike experience. As much as we’re focused on providing unparalleled performance features, like a larger battery and proprietary pedal assist technologies, it’s equally important that our bikes are accessible and affordable.” 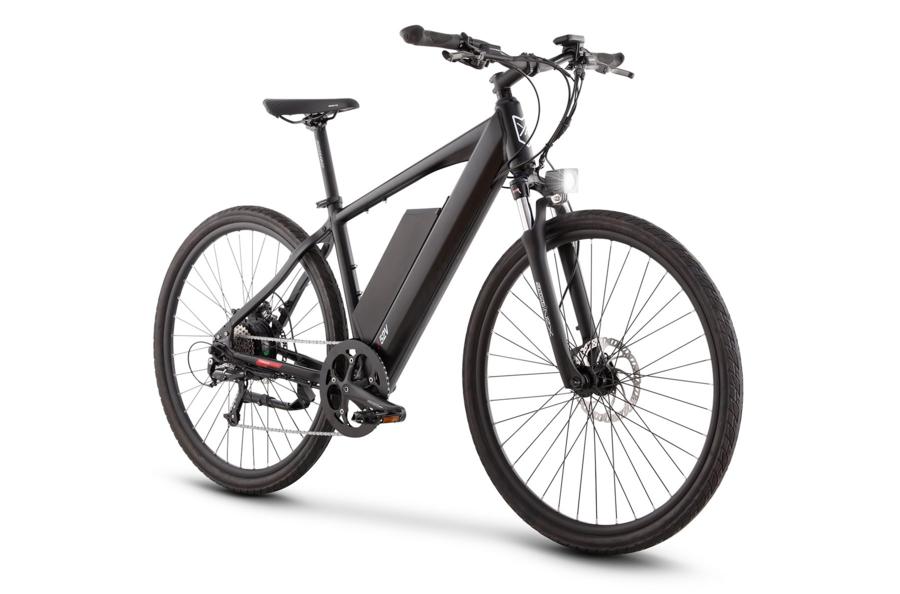 The new CrossCurrent S2 with the upgraded 52 V battery is priced at $1,799. While it can reach a standard top speed of 28 mph (45 km/h) with the left-hand thumb throttle, the 52 V CrossCurrent S2 will also feature a “race mode” that offers speeds of up to 33 mph (53 km/h) under pedal assist. That’s not quite as fast as their highest speed model, which tops out at 40 mph (64 km/h). But it still demonstrates some pretty solid power and performance.

That power comes from a 750 W rear hub motor rated for a peak output of 1,300 W. The included battery is a 13 Ah model providing just shy of 700 Wh. Juiced Bikes claims that is enough for 100 miles (160 km) of range. Don’t expect to ever see that kind of mileage though, unless you’re doing nearly all the pedaling work and barely sipping any juice from the battery. Still though, a 52 V and 13 Ah battery should take riders quite a distance.

Add in the hydraulic disk brakes, dual torque and cadence sensors, LCD matrix display and 9-speed Shimano transmission and you’ve got yourself a pretty decent bike.

None of these components are top shelf, mind you. That’s how they can offer such a bike for only $1,799. And yes, there are 22+ mph (35 km/h) electric bicycles out there that cost half as much.  But the CrossCurrent S2 is a solid e-bike with a history of performing well. So upping it to 52 V should only make it even better, in my opinion.

The 100+ mile range thing is a bit misleading though. Is it possible? Sure. Juiced Bikes is even kind enough (and honest enough) to provide real world range data. The tests show that when a rider slows the bike down to just 10 mph (16 km/h) and rides on smooth, flat ground with 60 PSI tires, no wind and while using pedal assist level 3, that 100 miles of range is possible. So that’s fair. But notice that when the speed picks up to 20 mph (32 km/h), the range suddenly drops by two thirds. And if you remove pedal assist at that point, the range drops even further. Which is to be expected, to be fair. But the 676 Wh battery can still power the bike for 30+ miles (50+ km) at speeds over 20 mph (32 km/h), which is pretty darn good for a commuter e-bike.

As much as a I appreciate the e-bike as a good quality, affordable commuter for higher speed e-bike riders, I just don’t understand why left hand throttles are becoming a thing. I’ve seen them a few times and they always weird me out. I get why they did it, to save space for the shifter levers on the right side. But there are other solutions (like the more natural feeling twist or half-twist throttles, for example).

There are a lot more expensive e-bikes out there that aren’t nearly as capable as the 52 V CrossCurrent S2. Sure, they probably have higher quality brakes, shifters and other components. But at a certain point, the CrossCurrent S2 is good enough for the majority of riders out there who are commuting – not competing.

What do you think of Juiced Bike’s new ride? Let us know in the comments below.