Review: The Blix Aveny electric bicycle is a Dutch-style bike that looks as good as it rides

Many electric bicycles on the market fall into hybrid or mountain bike categories, with a few nice but expensive examples of electric road bikes as well. But you don’t see too many Dutch-style electric bikes, which makes the Aveny by Blix Bikes stand out among its peers.

I’ve been riding an Aveny around for the last few weeks and have found it to be quite unique compared to other e-bikes – and that’s a good thing!

Design – it’s all in the details

First of all, the Aveny’s classic design is immediately apparent just from looking at it.

From the stitched leather handgrips to the built-in front rack, the whole bike just has a crisp, classy feel to it. No detail was spared.

Instead of normal, clunky plastic pedals, the Aveny has smooth and shiny metallic pedals that compliment the color scheme of the bike and gives it a high quality look. Instead of a rats nest of wires and cables, the Aveny uses cable wrap to create a beautiful front end. Instead of running the rack support in front of the head light, which would have been much simpler, they curved it around the light to protect it and prevent the structure from obscuring the beam. Instead of a clunky looking aftermarket bell taking up space on the handlebars, they included a mini bell built right into the Tektro brake lever! 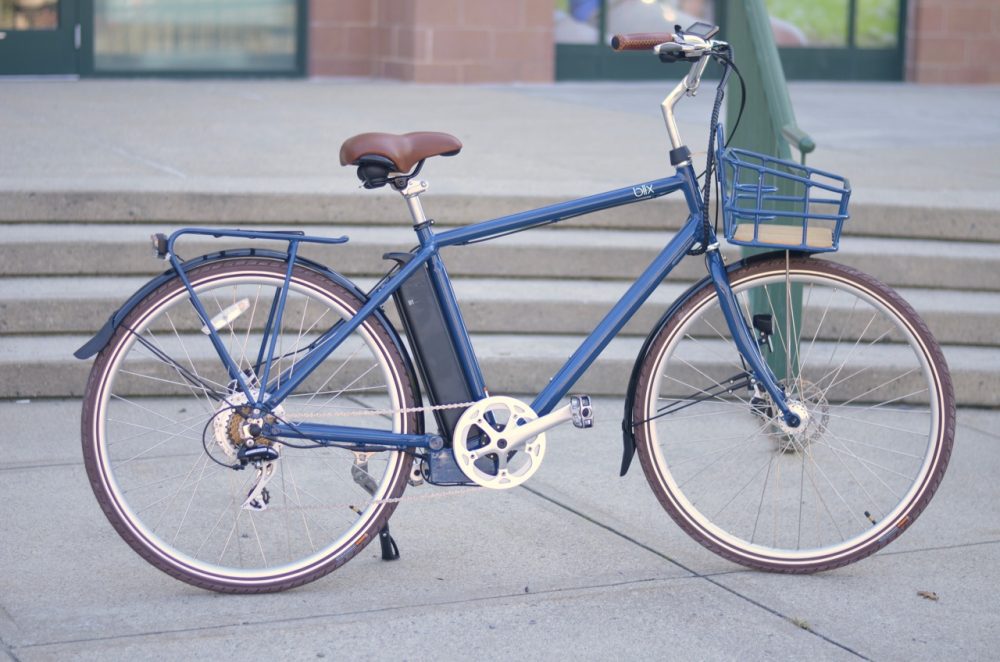 Basically, they just thought of all the little details that add up to a bike that looks even more polished.

Instead, the Aveny’s design is much more akin to a Dutch bike, and looks more like something you’d see cruising along a waterfront bicycle path in Amsterdam than tearing along a gravel trail of your local park.

I ride a lot of different e-bikes around town, and my wife jokes that my office has turned into an e-bike stable with half a dozen or so different models parked around the room at any given time. Among all of my e-bikes though, the Aveny gets the most attention by far from passersby around town. It simply stands out and grabs people’s attention. I’ve lost track of the number of times I’ve come out from the grocery store or local food takeout to see a couple of people standing around the bike, ready to pepper me with questions.

The geometry of the bike creates a more upright ride, causing you to sit tall and straight, which I enjoyed. When you’re riding the Aveny, you almost feel like a bicycle model. It’s quite a change of pace from riding around on my electric mountain bikes, and I must say that I think it’s a change for the good. Not only do I have a better field of view of the road ahead, but the whole riding experience just feels more comfy and relaxed.

When you’re in a partial tuck like on a mountain or street bike, you feel like you’re racing, dipping and diving. That can be fun, but is also a more stressful way to ride around. When you’re sitting upright, you feel more carefree, like in an old time movie with the sun on your face and a warm soundtrack following you around.

The entire bike just has a totally different feel to it than most bikes, both physically and mentally. 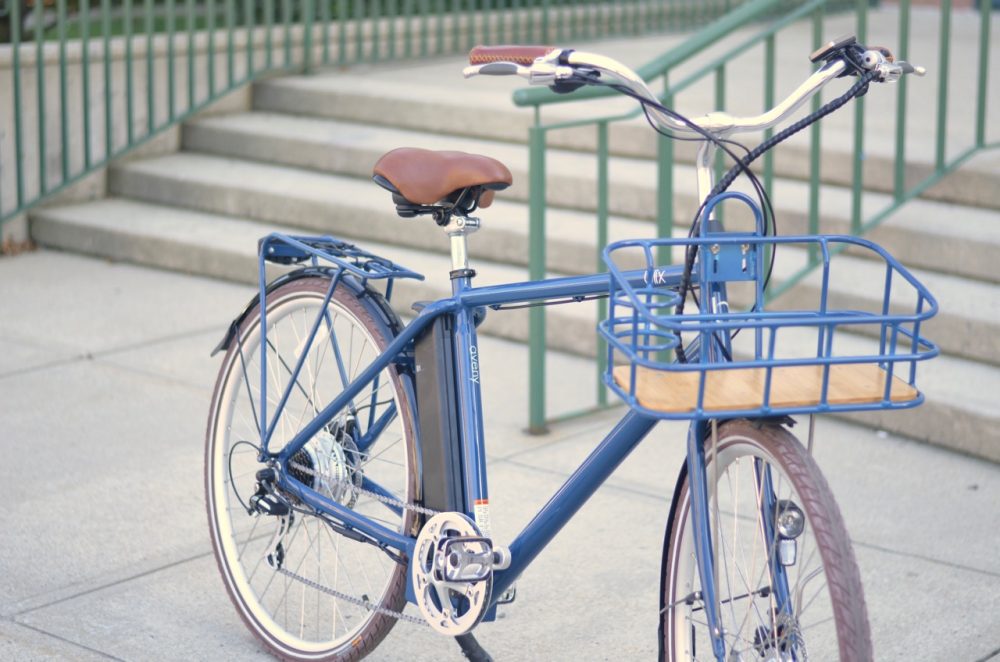 The riding experience itself is also fairly relaxing, though the lack of suspension means that the bike definitely prefers smooth terrain, such as pavement or sidewalks. With its large 700c wheels, the Aveny feels like it just glides down the road.

However, if you hit a section of cobblestones or a few potholes in a row, prepare to hang on to those leather grips and go bouncing in your seat. The lack of any suspension, forward or rear, along with the narrow tires means that ride is unforgiving when surmounting obstacles in the path. After testing the ride on potholes though, I steered towards greener pastures and was back to that effortless gliding along smooth bike lanes and shoulders. 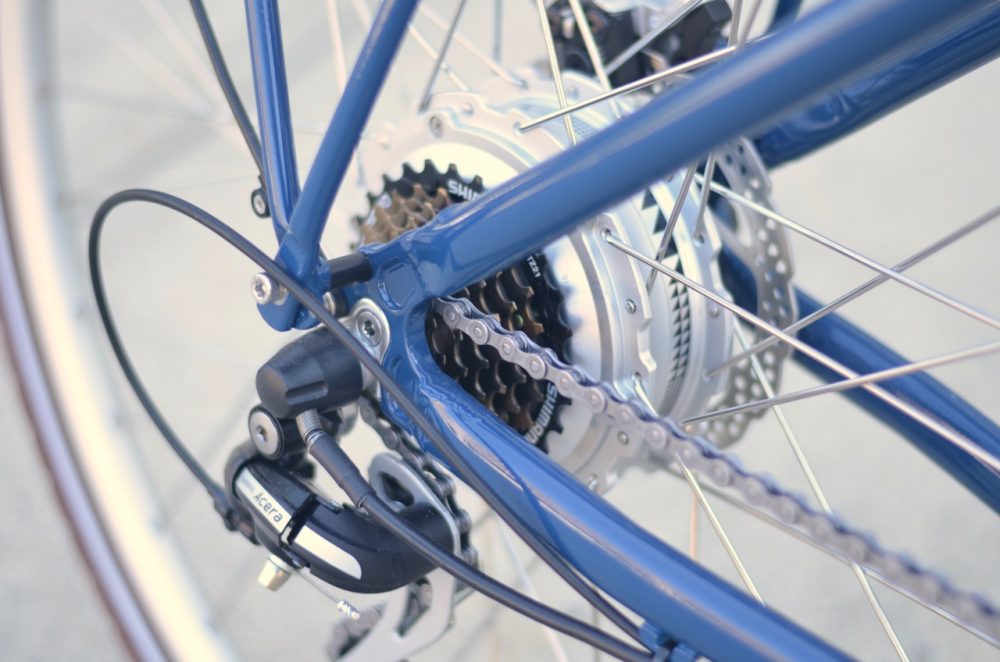 The motor is a 350 W rear hub motor that feels plenty powerful for my 150 lb (68 kg). It easily powered me up and over hills without a problem, and rocketed me to 20 mph (32 km/h) on flat ground with better acceleration than I was expecting for a 350 W hub motor.

The pedal assist works well once it gets going, but it uses a cadence sensor instead of a torque sensor, which means that there is a short delay from the instant that you start pedaling until the motor kicks in. This normally wouldn’t matter much – I mean, what’s a couple seconds?

However, it can become a slight annoyance when starting from a dead stop under pedal power alone. If you’ve left the bike in a high gear before coming to a stop, then you could be struggling to stand on the pedals for the first pedal turn or two until the cadence sensor registers your pedaling movement and decides to give you an electric boost. It’s during those two seconds that I’d love to have a torque sensor instead of a cadence sensor. But considering torque sensors can easily add a couple hundred dollars to the bike’s retail price, those two seconds aren’t that bad in the grand scheme of things.

In practice, that you’re-on-your-own startup sequence happened to me for only a couple days until I realized how stupid I was for overlooking one of the best features on this bike – a hand throttle!

This is embarrassing, I know, but at first I didn’t even realize the bike had a hand throttle in addition to pedal assist.

In my defense, here’s why I completely missed the throttle: it’s installed on the left side of the handlebars, which isn’t where you’d normally find it. Almost all e-bikes have right hand throttles like a motorbike.

To make things even more confusing, the throttle is actually a right-hand thumb throttle that is installed on the left, meaning it’s basically upside down. You push it up, or forwards, instead of down like on most e-bikes. 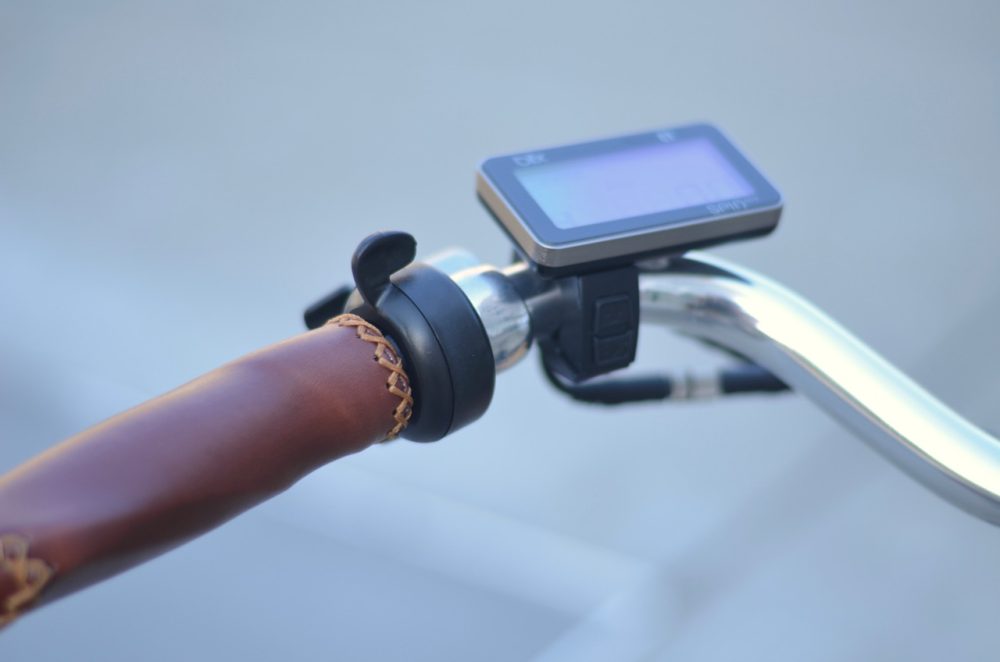 If this is your first electric bicycle then the backwards throttle will not matter much to you. You’ll just use the throttle with your left thumb and that will be that. But for anyone coming from other e-bikes, the change will be a bit odd in the beginning until you acclimate to not only using your left hand to regulate the throttle, but spinning the throttle in what feels like the ‘wrong’ way compared to how you’ve always done it in the past. It only took me a day or two though before it stopped feeling foreign.

The battery is a 36V 11.4 Ah, 410 Wh pack that is nice and slim, hiding behind the seat tube so that it doesn’t detract too much from the classic styling of the bike. There is an option to upgrade to a larger 630 Wh pack as well, should you want the extra range.

Blix rates the Aveny with a range of 40 miles (64 km) on the standard battery or 60 miles (96 km) on the upgraded battery, and based on my consumption during my first few days of pedal assist riding, I’d say that is close to accurate – if you’re pedaling. But once you switch to throttle-only riding, expect to use more battery to go the same distance. For me, throttle-only range was closer to 20-25 miles (32-40 km), and that included hills and other factors that will decrease your range.

For me, even 20-25 miles of range is plenty for city riding, especially since the battery is a breeze to remove. While it looks like it would be trapped by the big and plushy, comfortable seat, there’s actually a neat little lever hiding under the seat that lets it swing up and out of the way. Then you just unlock the battery with the key and pull it out to take it with you to charge on any standard AC outlet. The battery even has a nice built-in grip that that makes it easy to carry around with you. At just 3.09 kg (6.8 lbs) for a 410 Wh battery, it is quite reasonable to either carry at your side or to stash in your backpack.

On top of the battery is a digital readout and on/off switch. The battery-mounted indicator is a nice touch that allows you to see how much charge you have left, even when the battery is off the bike.

I found the Aveny to be a very nice pleasure bike. For me, it was perfect for leisurely trips.

But that didn’t mean I couldn’t also turn it into a work vehicle. The rear rack is a fairly standard size for a bicycle, but still immensely useful, especially with its spring loaded mouse-trap style arm. Apparently those were meant to hold old-style saddle bags and panniers, but I’ve seen people use them to hold onto anything from books to soccer balls in a pinch. It sure comes in handy when you don’t have a bungee cord but still want to secure something to your rack.

The front has a cute little basket with a bamboo base and even a cupholder. I thought the cup holder was kind of gimmicky at first, but I gave it a shot with a bottle of Coke and it actually worked without spilling my drink. It probably didn’t do the carbonation any favors, but it certainly worked. However, I used it much more often to hold my bicycle lock, since it’s the perfect size. Realistically, you can basically use it like a subdivider in your basket for anything cup-sized, which is a nice feature to have. 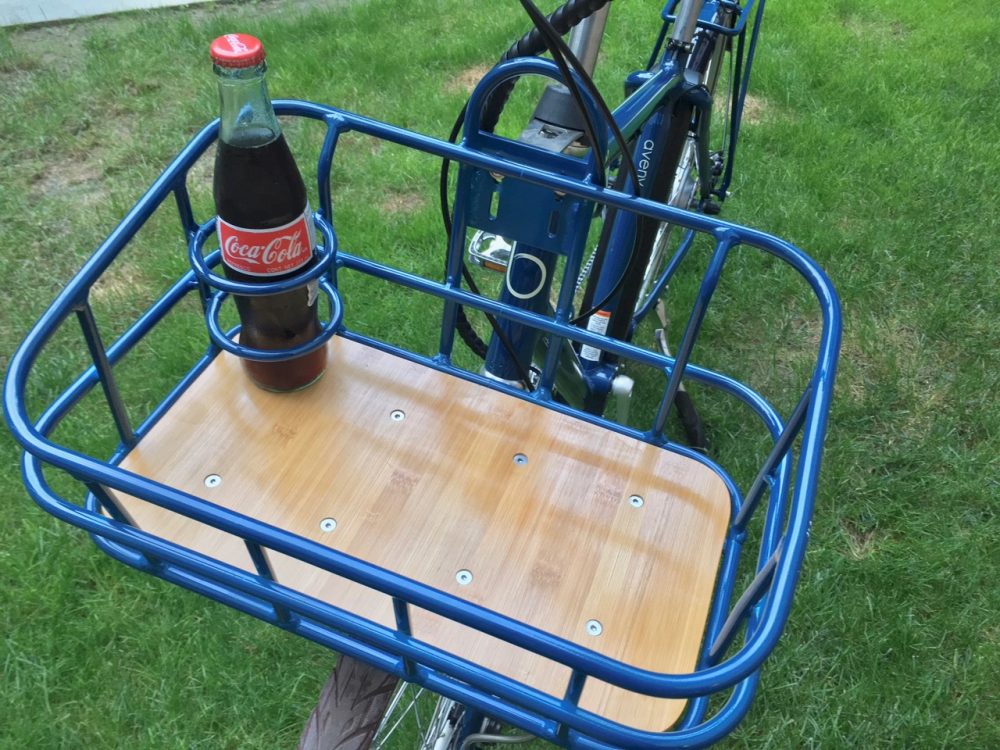 The integrated lights are another welcomed feature, especially considering how much I hate having to click little battery-powered lights on and off – not to mention the annoyance of running out of juice and having to search for more coin-cells after already riding home in the dark.

The Aveny’s lights are powered by the main battery pack. So, as long as you have battery power, you have lights! And considering the small but efficient motor just sips electrons, you shouldn’t really be running out of battery during any normal city-riding scenarios.

I’ve been quite impressed with the Aveny, and I think it’s definitely worth the $1,699 price. It’s a beautiful looking bike among a sea of not-so-beautiful competitors.

It comes with all the features you’d expect, such as disc brakes, fenders, front and rear cargo storage, long range, efficient tires and a classic Dutch-bike design.

For anyone who wants an electric bicycle for recreational use or even for commuting on smooth paths and trails, it’s going to be hard to find an electric bike that is better suited for less money.

What do you think of the Aveny? Let us know in the comments below.