Electric bicycles have come a long way in the last few years. Despite originally being designed to provide cyclists with a relative amount of assistance, many companies are now pushing the boundaries of what can be considered a bicycle. From Vintage Cycle’s 36 mph retro-looking Scrambler to Onyx’s 30 and 60 mph CTY and RCR models.

The newest production electric bicycle to join the 40+ mph (64 km/h) club is the HyperFat HF1100 by Juiced Bikes.

Juiced Bikes, a California-based electric bicycle company, has been adding a number of interesting e-bikes to their lineup recently.

Last month they launched pre-orders for their new mini-bike styled rides, the City, Camper and Hyper Scramblers. Designed to challenge the popular Super 73 line of e-bikes, Juiced’s Scrambler e-bikes hit their funding goal in just a few hours and have so far received over $1 million in pre-orders.

Now the company is keeping that momentum going with their next e-bike launch, the HyperFat HF1100.

In addition to the 40 mph (64 km/h) top speed, this fat-tire electric bicycle has other impressive specs as well.

The HyperFat sports a 12T Mac motor rated for 1,100 W max continuous. But with a 35A controller and a 51.8V battery, this e-bike will actually be pulling around 1,813 W peak from the battery. How much of that power actually reaches the ground is anyone’s guess, but it’s sure to be one of the more powerful e-bikes currently on the market.

The Mac motor has long been popular with the DIY electric bicycle building community, and has recently begun finding favor among e-bike manufacturers due to its combination of light weight and high power. 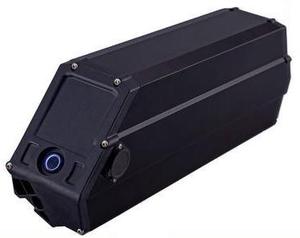 The HyperFat also sports a 1,050 lumen headlight, an integrated LCD advanced matrix display with “race mode”, a combination of a torque sensor and cadence sensor for finer pedal assist support, and a hand throttle for anyone who doesn’t feel like pedaling.

The bike is also designed for a wide range of riders, with three frame sizes to choose from. Each frame will include an adjustable air shock front fork, 26″ x 4″ racing slick fat tires, rear half fender, 180 mm hydraulic disc brakes, 9 speed Shimano cassette and will be rated for a weight capacity of 275 lbs (125 kg).

The HyperFat is currently available for pre-order for $3,299 on Juiced Bike’s website with an eventual retail price of $3,799.

If that sounds expensive, then you might have the current political situation to thank. Due to the Trump Administration’s growing trade war, electric bicycles imported from China are now subject to a 25% tariff. Like virtually all US-based e-bike companies, Juiced Bikes designs their bikes in the US but has them manufactured and assembled in China.

And of course if you want a street legal version of the HyperFat that is easier on your wallet, you can check out Juiced Bike’s $2,399 RipCurrent S, a similar fat tire electric bicycle with a 750 W motor that tops out at 28 mph (50 km/h), making it street legal anywhere Class 3 e-bikes are permitted. Or if fat tires aren’t your thing, Juiced has a similar spec’d 28 mph “normal” e-bike, the CrossCurrent S, for just $1,799.

Check out the video below to see some behind the scenes info on the new HyperFat HF1100:

On the engineering side, the HyperFat HF1100 is an awesome feat. I mean, it’s no Sur Ron monster e-bike, but even with a top speed of 40 mph (64 km/h) it still looks a lot more like a bicycle and has a better hope of at least pretending to be street legal.

Not that you would ride one of these on public streets though, right? Right?

I’m guessing these would be great for racing and other shenanigans on the asphalt, though I don’t know how well they would do off-road. The fat tires will help absorb some bumps and pot holes, but with no rear suspension, you’ll definitely want to be planning your track accordingly at 40 mph!

I’m still curious to hear some range estimates on this bike, as this model is so new that some of the details haven’t yet been publicized. At those speeds the Mac motor is going to be guzzling electrons, but I think the 1 kWh battery still should help provide good range.