Lightyear unveils its ‘solar’ electric car with 450 miles of range

The Lightyear One, a new solar-powered electric car developed by several times Solar Challenge winners, has been unveiled today and the startup claims an unbelievable range of 450 miles (725 km) on a single charge.

We have been reporting on Lightyear for a few years now.

The startup first caught our attention because it spun out of Solar Team Eindhoven, a group of engineering students from the Technical University of Eindhoven (Netherlands) who have been competing in the World Solar Challenge with their Stella and Stella Lux, energy positive solar cars – meaning that they can produce more energy than they consume.

Generally, it’s almost impossible to add any meaningful power to an electric vehicle using solar since there’s not enough surface to install solar cells in order to supply the power needed to move vehicles that often weigh over 3,000 lbs.

To achieve positive energy output, Solar Team Eindhoven designed the Stella Lux to be extremely aerodynamic and used lightweight materials such as carbon fiber and aluminum.

But the vehicle was built for a student competition and making a street-legal vehicle that can be sold to the public is another thing.

That’s what they are trying to do with the Lightyear One.

The vehicle was unveiled today in the TheaterHangaar in Katwijk, the Netherlands.

Lex Hoefsloot, CEO and co-founder of Lightyear, commented on the unveiling:

“This moment represents a new era of driving. Two years of dreaming, thinking and working hard have led to this milestone, which is a giant leap towards achieving our mission of making clean mobility available to everyone.”

Here are a few images of the prototype unveiled today:

As you can see, it’s an extremely aerodynamic design. The company focused on efficiency leveraging their knowledge from their years desiging the solar cars for the Solar Challenge.

“We are solving these issues with what we call ultra-efficiency. On one hand, that will lead to an exceptional range of 725 km (WLTP) on a relatively small battery. On the other hand, it can charge directly from the sun because its energy consumption is much lower, generating up to 20,000 km worth of energy per year. Moreover, all of the charging options out there become easier to use because you get a lot more range for the same amount of energy charged. So, effectively, you charge a lot faster from any power outlet. You can charge up to 400 km per night from ordinary 230V sockets. That’s great for road trips because you don’t need a charging infrastructure.”

The vehicle is a 5-seater and it is powered by 4 independent in-wheel motors with undisclosed power, but they are not expected to be extremely powerful with a 0-100 km/h acceleration in “ten seconds.” 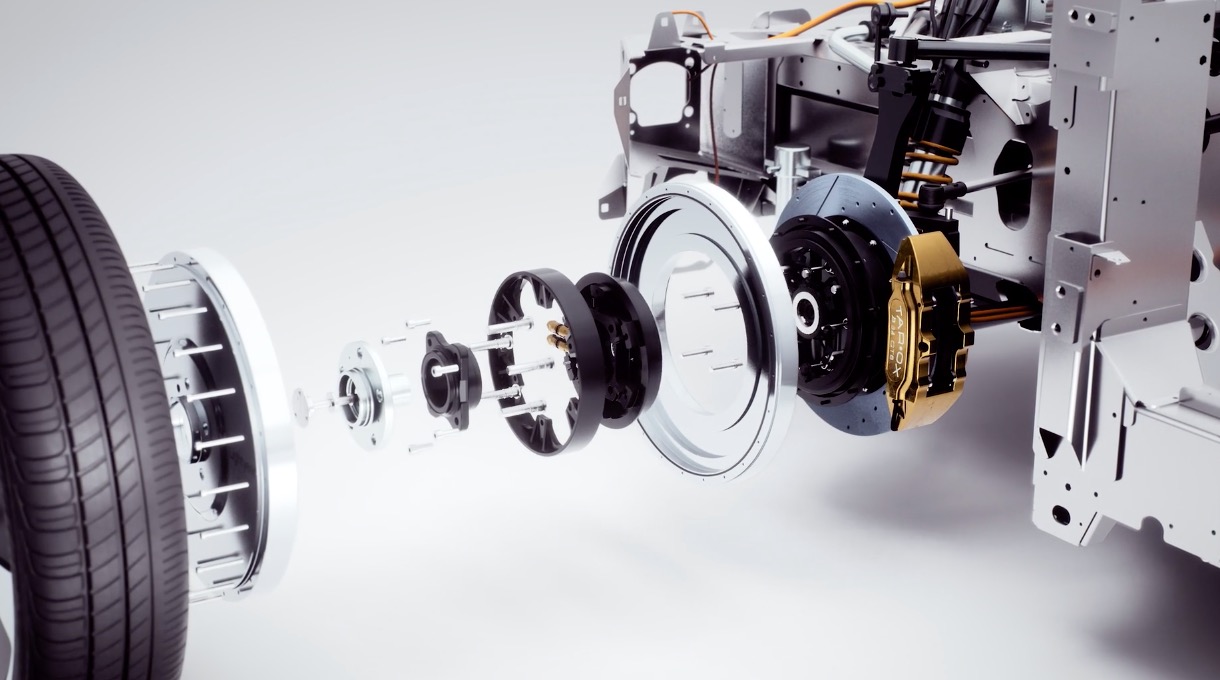 They didn’t confirm the size of the battery pack, but that’s not the most interesting feature of the vehicle anyway.

What’s most interesting is that they claim to be able to charge the battery pack through solar power generated with solar cells installed on the Lightyear One:

“Unlike conventional solar panels, our cells function independently. This means that even if part of the roof or hood is in shadow, the other cells continue to efficiently collect solar energy. In fact, our solar cells provide about 20% more energy than traditional ones.”

They claim that it can charge the electric car at a rate of 12 km per hour, which might not sound like much, but it would actually be significant if true.

The startup claims that the car will produce on average enough energy to power itself for 20,000 km per year.

Deliveries of the Lightyear One are expected to start in early 2021, but the company warns of a slow ramp up. The first 100 units are already reserved and they taking more reservations for other batches to be made later:

You can reserve the Lightyear One on their website.

This would be a very interesting car if their claims of efficiency and solar power generation are true.

How appealing is the concept of your car generating its own energy?

If their claim of 12 km per hour of solar charging is true, it would mean that you could drive a 30 km commute to work, park your car for 8 hours, have it solar charge back to full and drive back home without ever plugging in your car.

That would be super cool, but we would need to confirm their claims of efficiency here.

Also, a house rooftop is always going to be a more optimal place to generate solar power than the roof of a car.

So when you consider that we are talking about a €149,000 ($170,000) vehicle here, you have to start thinking that you might be better off buying a cheaper electric car and a solar rooftop system.

When charging at home, your car will be powered by solar energy and on top of it, your home will also be solar powered.

It’s clear that this car will not be for many people, but I still think it’s a worthwhile project and maybe it will lead to more deployment of solar cells on electric vehicles.