This beautifully retro electric motorcycle is headed to market next year

Regent Motorcycles is preparing their retro-styled Regent NO. 1 electric motorcycle for production after showing off the production prototype recently. The company is aiming for a May 2020 release of this eye-catching bike.

With an increasing number of electric motorcycle options on the market, riders are also starting to see more diversity in designs.

Sweden-based Regent Motorcycles is another example of an innovative yet retro-styled electric motorcycle that is preparing to hit the market. The company’s first model is the Regent NO 1.

The Regent NO. 1 was first displayed back in May of this year at the MC Mässan Swedish Motorcycle Fair. Encouraged by the positive response the Regent NO. 1 received, the company is charging forward with production plans. Currently, Regent is aiming for a market release in May of 2020 – less than one year away. 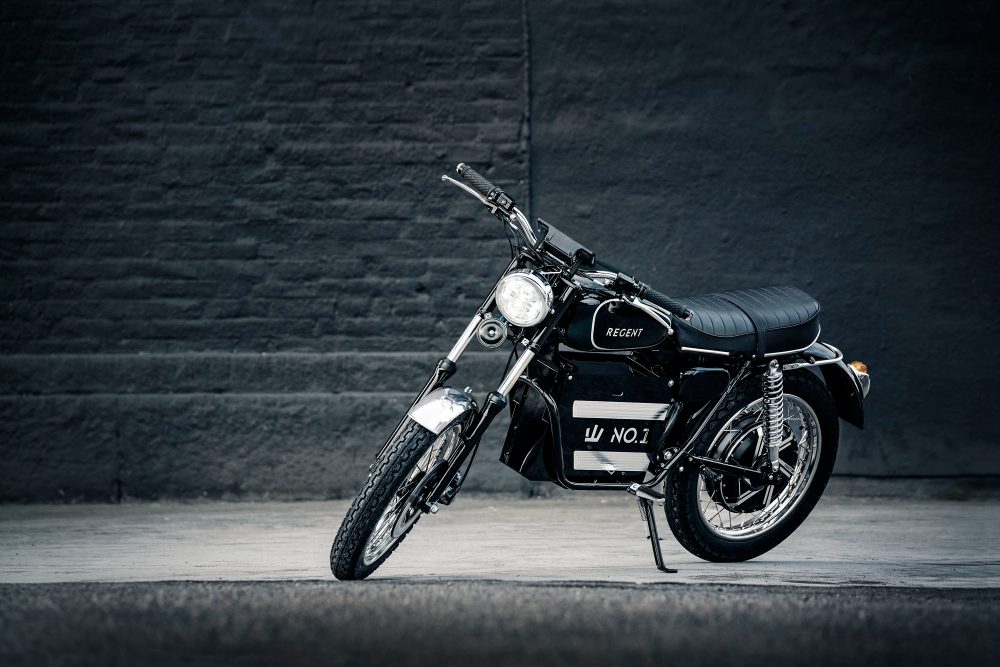 The battery is a 72 V and 80 Ah pack, offering nearly 6 kWh of capacity. That’s only a hair under the capacity of a Zero FXS ZF7.2 electric supermoto, and is enough for 150 km (93 mi) of range. That’s also comparable with the range of the Zero FXS ZF7.2.

The bike weighs around 130 kg (286 lb) and has a steel frame, standard telescopic fork and dual rear shocks featuring chromed out coilover springs.

The spoked 18″ wheels on the Regent NO. 1 come standard with ABS disc brakes, and regenerative braking is achieved via the rear wheel motor. Eagle-eyed readers may spot the dual brake levers and lack of a foot brake for the rear wheel. This setup is increasingly common on electric motorcycles, from small $2,495 urban electric motorcycles to the latest racing version of Zero’s SR/F Streetfighter. 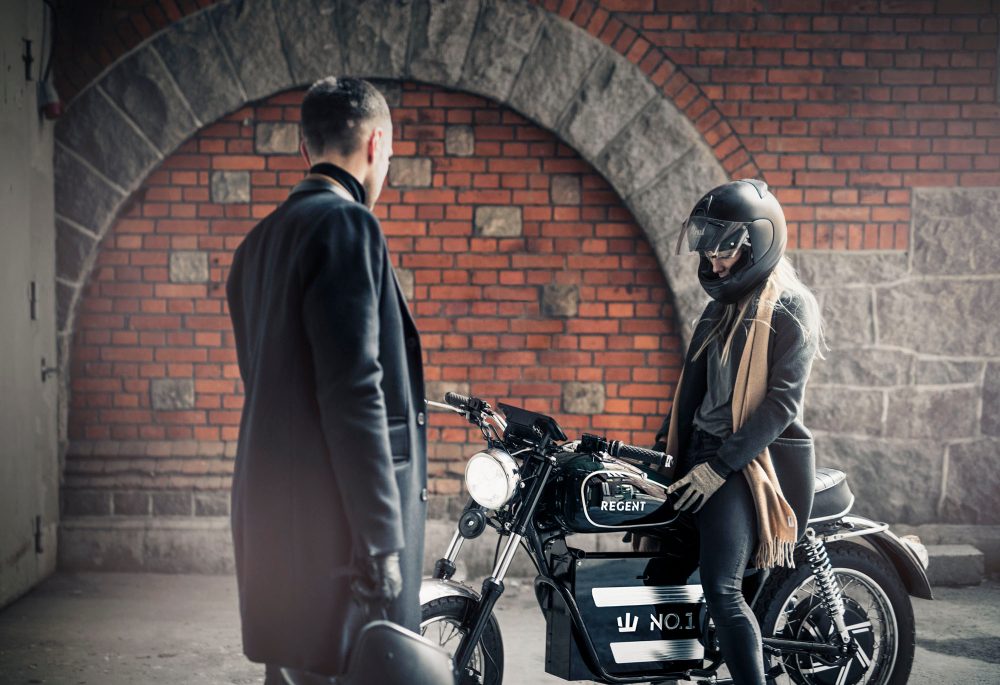 Don’t let the retro look fool you, as the Regent NO. 1 electric motorcycle sports some modern tech as well. The instrument panel is a touch screen and the bike includes built in GPS as an anti-theft device. A geo-fenced alarm can help thwart thieves from making off with the bike.

This is one beautiful electric motorcycle, if you ask me! I’d love to ride this around!

I’m currently riding a 2019 Zero FXS, which has very similar specs for speed and range, except that the Zero’s motor is about twice as powerful. And to be honest, as much as I love the crazy acceleration of the Zero, it’s more than necessary for my daily use. That means a bike like the Regent NO. 1 would do everything I need. The Zero looks awesome and aggressive, but the Regent is simply beautiful.

Surely some people will gripe about the fake tank and how electric motorcycles shouldn’t need it. Fine, it’s a fair point. But the tank is a design statement – not a gasoline storage device. It probably serves double duty as wire management or storage as well. And I think there’s nothing wrong with electric motorcycles adopting classic looks. The more e-bikes there are, the more design options will be available to riders. And that’s a great thing.

The 120 km/h (75 mph) top speed makes this electric motorcycle more than just an urban runabout. You should be fine taking it on highways, and perhaps even some short interstate jaunts when necessary. At the end of the day though, this is definitely still a primarily urban bike. And with looks like these, you don’t want to be going that fast anyways – you want people to get a good look at the Regent NO. 1!

The only thing I don’t like about the design is the boxiness of the battery, specifically the way the bottom corner juts out of the frame. They are probably using rectangular pouch cells, which makes it hard to build the battery into any other than a box shape. So I get the engineering limitations, but I just wish the battery box followed the frame more closely.

And while the touch display will certainly be convenient, some old school needle gauges would have really wrapped this bike up nicely. But those are so hard to come by these days. Even the Unu electric scooter that used to have needle gauges recently replaced them with a digital dash.

And I guess while I’m being nit-picky, is it just me or is that hydraulic line for the rear brake hanging rather low? I don’t want to rip that thing off with my heel!

When it comes to the price, I’m not shocked or turned off. While the price is a bit high for the performance, I wouldn’t call it exorbitant, especially for a new startup. I’d happily ride a Regent NO. 1 any day of the week!

[Update: Regent’s team reached out to share their updated design (below), which streamlines the originally boxy battery. The’ve informed us that the tank is used for a mobile charger and for storage. I definitely approve of this sleeker redesign and am even more excited to see this retro electric motorcycle hit the road next year!]