In college in Southern California, I would skateboard between classes. It saved a few minutes of commute and was fun on the manicured streets and smooth sidewalks in and around USC.  But even as big a fan of micro mobility, I haven’t since seen skateboarding as a commuter tool, even with the powerful new longboards from Boosted and others. Roads and seasons in New York are just too terrible. But last month, Boosted gave me their $999 Boosted Mini X in an attempt to change my mind…

The Boosted Mini X is the latest in Boosted’s line of powered skateboards that started with its 2012 longboard, and I get why Boosted has mostly stuck with longboards since then. The stability of longboards makes throttling and breaking easier to absorb on a ride. You can spread your legs out a lot more and there’s a lot more flex in the board and the trucks.

A short board on the other hand is meant for kicktail methods and kick flips, not necessarily smooth transportation. So while I’ve ridden Boosted’s gen 2 and a few other electric longboards and had a lot of fun, the Boosted Mini gave me pause.

Caveat: I’ve put on some weight and dislocated my ankle a few times since college 20+ years ago but still mess around on a skateboard with my kids in our driveway so I’m not totally out of the loop.

The Boosted Mini X comes ready to go with almost a full charge out of the box. The first thing you will notice is the significant weight of the Mini X. At 16.8 pounds or 7.6K, it is about triple the weight of normal short boards. It takes some real time getting used to it. Kicking the tail up requires a lot more weight than you are used to. 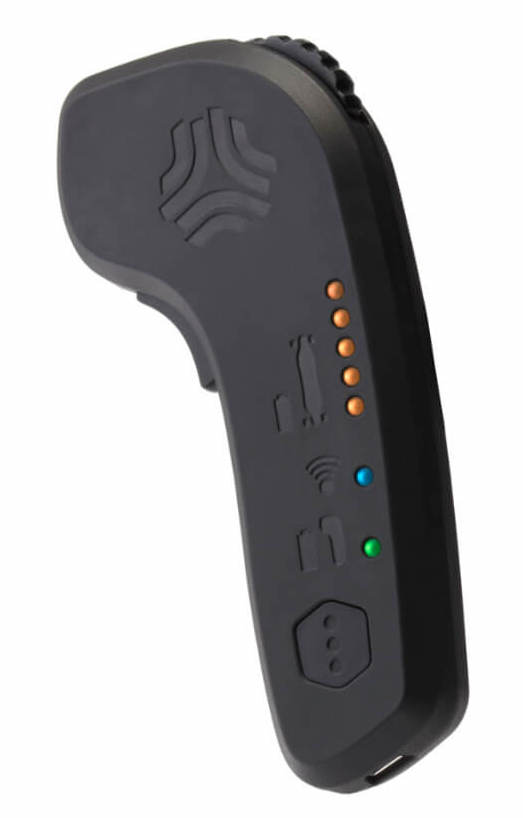 The power switch is on the bottom and is orange. Next to it is the DC charging port. 5 LEDs let you know how much power is left.

The remote, which is a pistol format, has an activator button for the forefinger and a forward/reverse slider for the thumb. It strangely charges via an included mini-USB (not micro) cable and has LED lights to indicate connection and battery.

Out of the box, the Boosted board is set on the medium of several levels of power and that’s how I started out. I definitely didn’t feel the comfort level of a longboard when riding the X around our driveway for the first time. My recommendation would be to connect the Bluetooth iOS/Android app and throttle it down to beginner level to get started.

There are not a ton of things you can do with the app. It is almost entirely designed to control the power of your board. I recommend connecting it via Bluetooth out of the box and sliding it down to beginner mode if you don’t have a ton of experience with short electric skateboards. I only used the app to adjust power, but there are some community settings in there as well.

I can’t say enough good things about Boosted build quality. Sure it is heavy, but everything from the deck to the trucks to the wheels is reinforced like a tank. I love the replaceable tail puck and the reinforcements around the edges which will keep this thing in great shape for years. If you have any doubts, check out this guy doing some impressive tricks on a Boosted Mini (skip to 2:00):

There’s nothing quite as fun as a powered skateboard for getting around on smooth surfaces. Unfortunately, once I leave my driveway, the roads get rough and potholes and puddles are many. Sure, Boosted Boards have those fat 80mm wheels but those 2 inch potholes come at you quick. New York City streets are notorious for having disastrous quality, so I mostly took a pass there.

(Yes, I know Casey Neistat rides his Boosted all around New York).

I did, however, traverse some solid bike paths including the West Side. I would say electric skateboard traffic is about 10-15% of the vehicles on the path now and I can also say the Boosted Mini kept up or passed every single one, even with its 200+ pound rider. I’m not sure if I exactly hit 20 mph but it sure felt like I did.

Braking is done by moving the slider into reverse and the more you move the more you brake. I would caution that if you pull it all the way, be prepared to stop short because it means business.

At 200+ lbs, I really didn’t expect to get up much of a hill. But to my surprise, the Mini X zipped me up moderate hills as you can see in the video above. More significant hills, however, approaching 20% grade were a no go without a few kicks. I will say that you must make sure to lean forward when going up hills. I did a few involuntary methods screeching up a hill, including one nasty spill that my ankle can still remember.

Going down hills is great. Rather than tacking or reaching terminal velocity and praying, you can head straight down a hill. When things start to get scary you can pull back on the throttle a little bit for some regenerative resistance which slows you down wonderfully.

At this point, I should note that there is a less battery and therefore less acceleration/top speed version of this Boosted Mini called the Mini S. It costs “only” $750 to the X’s $999. The 15 pound S has a top speed of 18mph and a realistic range of about 7 miles on a charge. Compare that to the Mini X which has a faster 20mph top speed and double the range (14 miles), and is 2 pounds heavier.

The real differentiator between these 2 models (besides the S has orange wheels ftw) is actually the battery size. Those extra 2 pounds and $250 of battery riding below your deck actually double your miles and add negligible speed improvement from 18 to 20 mph.  But unfortunately, you can’t take it on a plane. The Boosted S however is 99Wh of Li-Ion battery which is legal currently to take on a plane. That’s a huge differentiator.

The Boosted Mini X takes awhile to get used to. If you are old like me and only have a little bit of experience on electric skateboards,  give yourself a few days to get used to the controller and the leaning you’ll have to do. Start on the beginner setting and work your way up. After that, it is fantastic fun. I found Boosted’s mileage numbers to be realistic although I gave them some leeway since I’m heavier than the average rider.

If you have a relatively smooth path to work that’s a few miles long, this would be a great commuter vehicle.  But personally speaking, I would prefer the smoother ride of one of Boosted’s longboards like the Stealth (review, $1599). The Mini is rigid, for better or worse.

In fact, I didn’t get to try a Mini S but the ability to take it on a plane and its decreased weight and price would make it my general recommendation. I don’t think I need the extra 2 mph of speed or 7 extra miles of range (plus orange wheels). Boosted sells way more of the S for a reason.

Overall, Boosted makes the best electric skateboards I’ve tried by a significant margin. The company has been around for 7 years and is funded so we expect them to be around for awhile. Of course, riders will pay a premium for the Mini X but the product looks great and works extremely well…and is tons of fun.

Deals on Boosted can be found on 9to5toys here (missed this one). 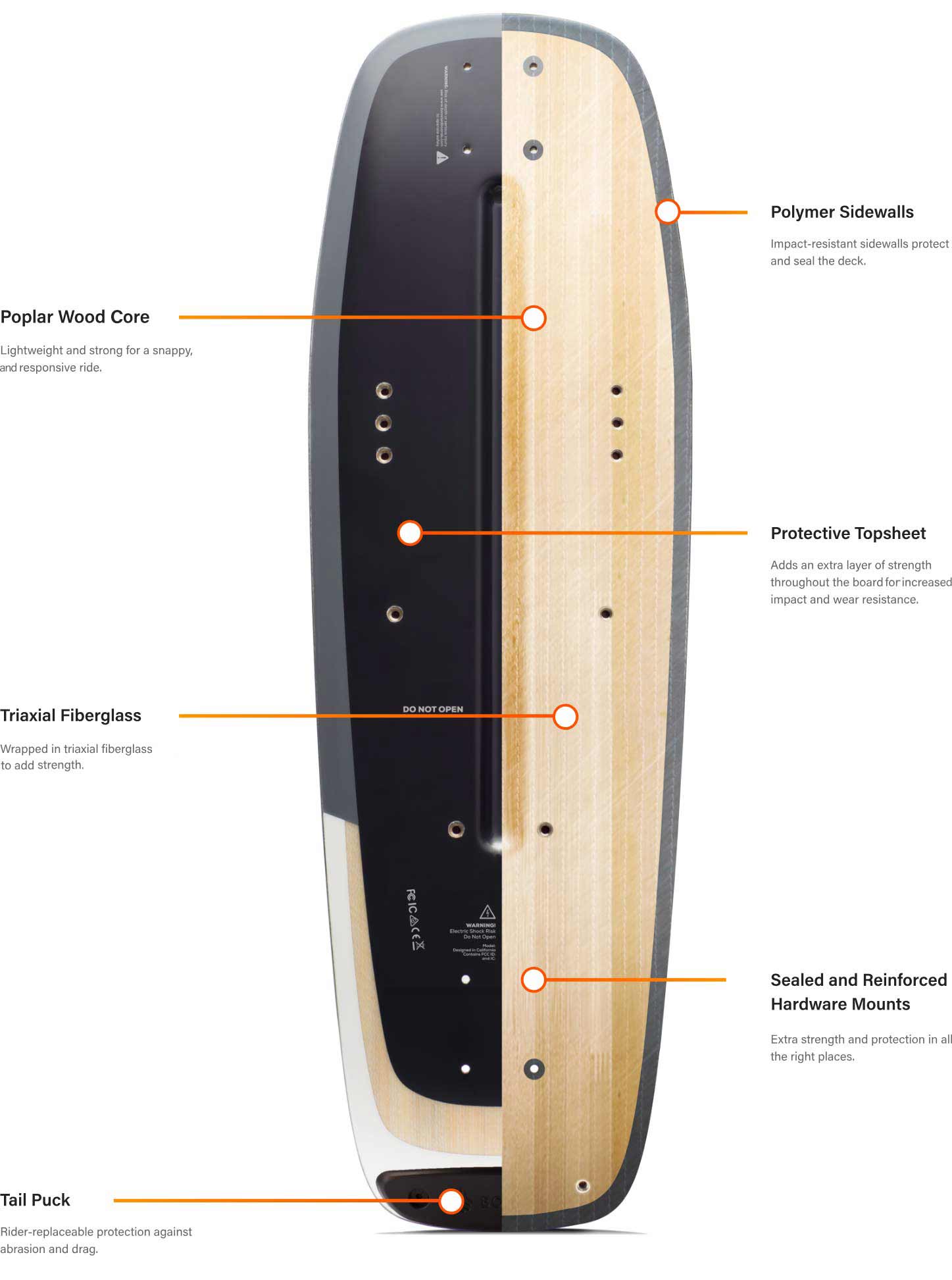