Tesla is now officially opening its first Supercharger V3, the new more powerful version of its fast-charging station, to the rest of its fleet after a pilot program.

Back in March, Tesla launched Supercharger V3, which can deliver a burst of power up to 250 kW to Model 3 vehicles and up to 200 kW on the latest Model S and Model X vehicles.

For the launch, Tesla upgraded some of the stalls at its Supercharger station located at the Fremont factory, but they were only accessible to a few Model 3 owners on the early access program. Then right after the Model Y announcement in Hawthorne, a V3 Supercharger was demonstrated outside.

Now Tesla announced on Twitter that the Supercharger V3 station is now opened to the wider fleet:

All Model 3 owners can stop by to take full advantage of the 250 kW fast-charging capability of their vehicles when combined with Tesla’s new on-route battery management feature. Note these new Supercharger stations have a thinner, glycol/liquid cooled cable.

It should significantly reduce charge time and wait times at the charging station.

Here are a few pictures of the Supercharger station at the factory (pictures by saramadgic and sergeymikov via Instagram): 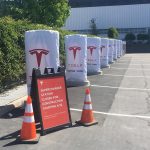 The new technology has the potential to significantly improve the charging experience in long-distance trips for Tesla owners, but it needs to be widely deployed in order to make a difference.

As far as we know, only the Fremont factory station and a few stalls at the Hawthorne Supercharger station have been upgraded to the new V3 charging technology.

However, Tesla confirmed last month that it build a Supercharger V3 production line at its Gigafactory 2 in Buffalo and it is already in operation. More production lines are planned for later this year.

It should result in an increase in production of the new Supercharger V3 charging cabinets and deployment at exiting older charging stations in need of an upgrade and at new charging locations.

Let us know if you find out about any new Supercharger V3 deployment.