Review: VeloMini Scoot and T1 trailer turns an electric scooter into a truck

Just when I thought I had seen all there was to see in the electric scooter industry, the VeloMini Scoot and T1 trailer popped up on my radar. I’ve seen bicycles pull trailers before, but I’ve never had an electric scooter that I could do all of my grocery shopping with… until now.

The VeloMini Scoot is an electric scooter model offered by VeloMini, an electric micromobility company in Santa Clara, California.

While the VeloMini Scoot is available on its own, combining it with VeloMini’s T1 trailer makes it an awesome errand running machine. I used it mostly for groceries, but it also worked great for running a few boxes over to the post office and even lugging my camera gear around during the review (don’t forget to check out the video review below!).

But as always, before we jump too far into the review, let’s get a rundown of the specs. 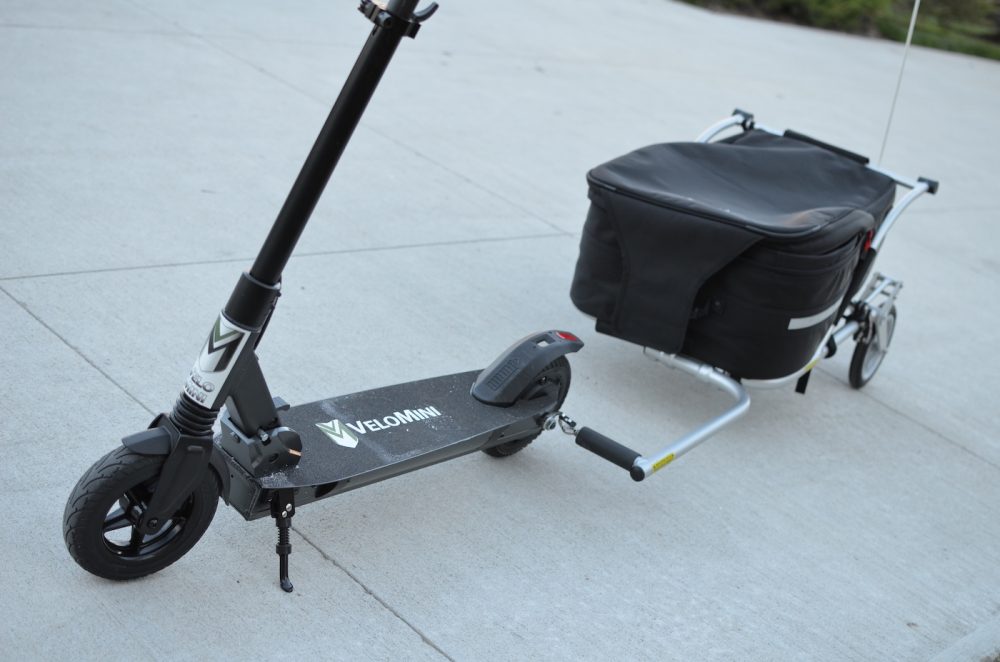 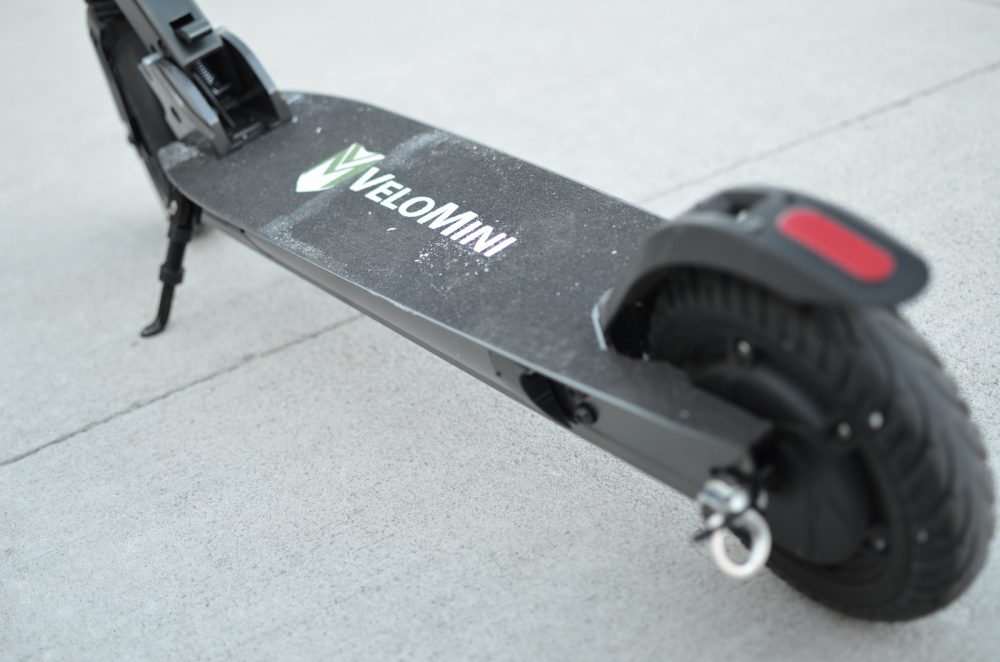 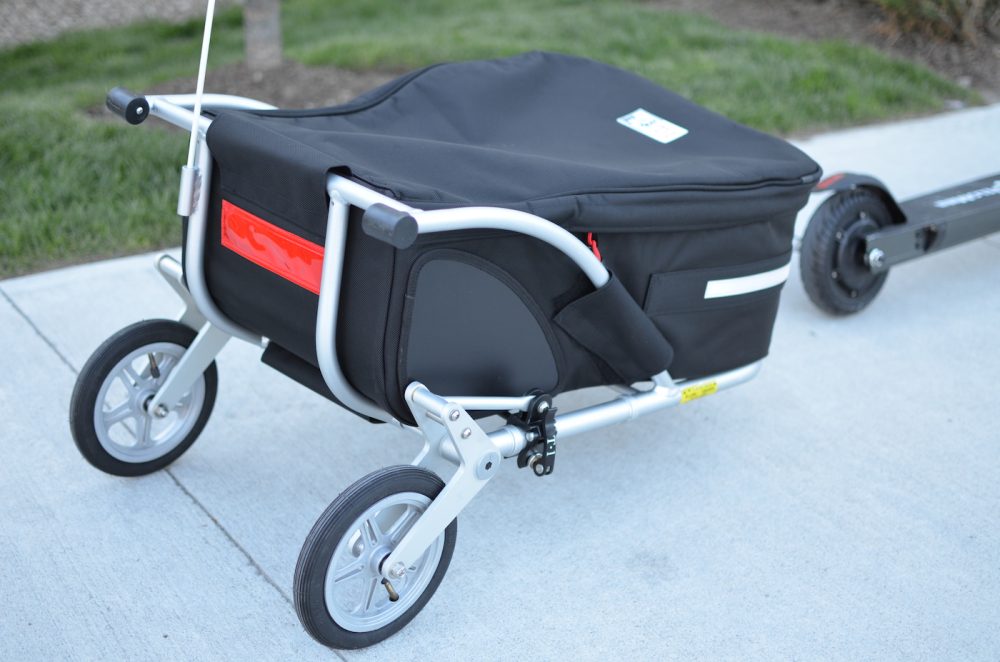 Don’t forget to check out my video review of the Velomini Scoot and T1 trailer below. Then read on for the rest of my review!

The 8″ wheels are airless, which has both pros and cons. On the upside, you never have to worry about getting a flat tire. But the rigid tires also transfer more vibration from sidewalk cracks and bumps in the road. The suspension helps prevent some shock from traveling up to the handlebars, though riding over pockmarked roads will definitely reveal the limits of the suspension. But like most scooters in this class, it glides perfectly smooth over properly paved streets and bike lanes. So as long as your city does a decent job keeping up with the road surface, the ride will be just fine. 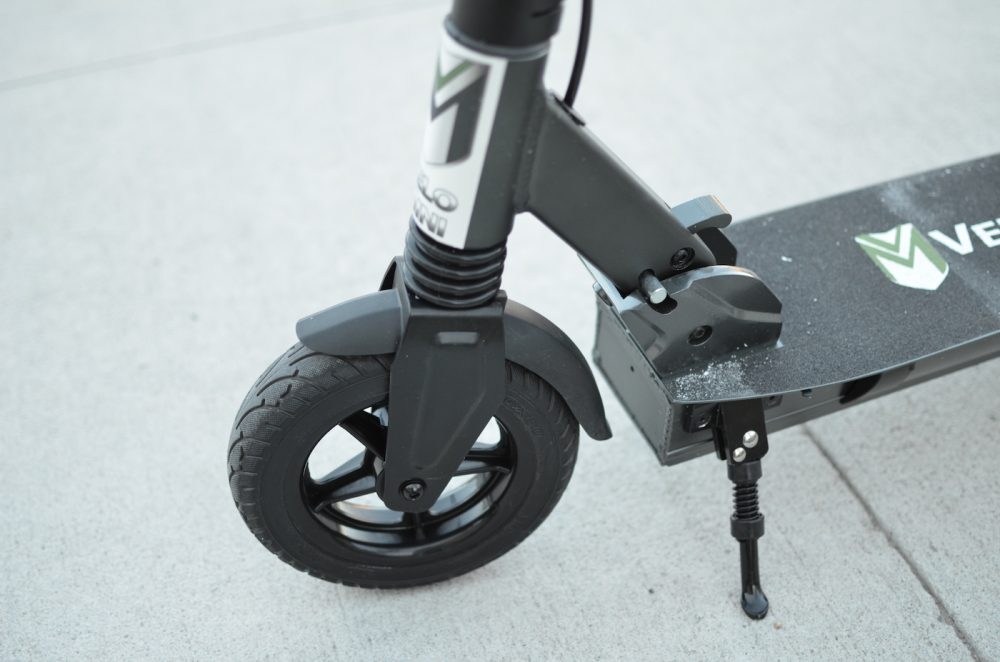 I really like the lighting on the VeloMini Scoot. Instead of putting a headlight up on the handlebars, it uses underdeck lighting to create a moving light show on the pavement beneath you. The lights still shine forwards and backwards so cars can see them, but the way they light up the road around you makes it hard to miss you. An added headlight on the handlebars could be nice, but I can always slap a $7 bike light up there. And scooter headlights aren’t meant for illuminating obstacles in the road anyways – they are about being visible to drivers. If you are riding in a place without street lights then you’ll need more than a dinky scooter light to actually see into the distance.

The folding mechanism feels solid and folds easily when you want it to, but doesn’t feel like it will accidentally fold on you while riding. In general, the scooter feels well put together. It’s not the most powerful electric scooter out there, especially considering the last scooter I rode was a 1.5 kW beast. But it will happily get you up over 15 mph, which is about as fast as I want to go on a lightweight scooter.

The one area I wish I could improve would be the strength of the regenerative braking. Using regenerative braking alone results in longer stopping distances. It’s totally doable, but you have to use the stomp brake if you want to stop quickly. I always like to keep both feet on the scooter deck when possible, so I prefer when the hand brakes or regenerative braking can do all the work by themselves. But for under $600, it’s hard to ask for too much more from a well-made scooter. I still mostly use just regenerative braking. However, I make sure to plan my stops a bit further in advance than on other scooters. And if I need to stop short, I know that rear foot brake is there waiting for me.

The scooter also includes this cool smartphone activated lock. You don’t need to remember a combo or use a key, you simply connect it to your phone and do all the unlocking from the app. It has a motion alarm and a continuity alarm that sounds if the cable is cut. The cable is 0.4″ thick braided steel, and it could be cut by a medium sized bolt cutter, but at least it will make a racket while someone is doing it. I wouldn’t compare this to my titanium lock, but it’s a great quick option and means I don’t need to add yet another key to my mess of a key ring.

Here’s where this scooter really shines. The VeloMini Scoot is great, but pairing it with the T1 trailer is simply awesome.

The trailer is incredibly well made. It has folding wheels and a handle which means it can become fairly small when not in use. Then it folds out into a full-size bicycle or scooter trailer. The T1 comes with a hitch that mounts right to the rear of the scooter, and it also comes with hardware to mount on a bicycle.

The frame is lightweight but very strong and rigid. The bag is also really high quality. I’m not sure why they rate it at just 66 lb (30 kg). I think that’s probably a lawyer’s doing because I loaded it with more weight than that and it worked just fine. The thing is absolutely sturdy.

The zippers are heavy duty, the velcro closures are strong, and the inside even features pockets to help further organize your stuff. In addition to working as a trailer, you can even use it as checked luggage while traveling. The wheels fold in to make it smaller and there’s an included bag that goes around the entire trailer if you want to make it look less trailer-ish while you’re traveling.

The hitch mechanism is a quick release and includes a safety cord, just in case it was to separate. At first, I eyed the rubber hitch closure suspiciously because I wasn’t sure it could actually hold the trailer in place. But the hitch never once came apart, so it seems to work better than it looks. And the safety cord is there, should you ever need it.

But the best part about the quick release hitch is that you can just bring the trailer into the store with you while you’re shopping and use it like a basket or cart. I did my grocery shopping this way and it worked like a charm. The big wheels are also easier to roll than most busted up shopping carts too, so the whole experience is more pleasurable. 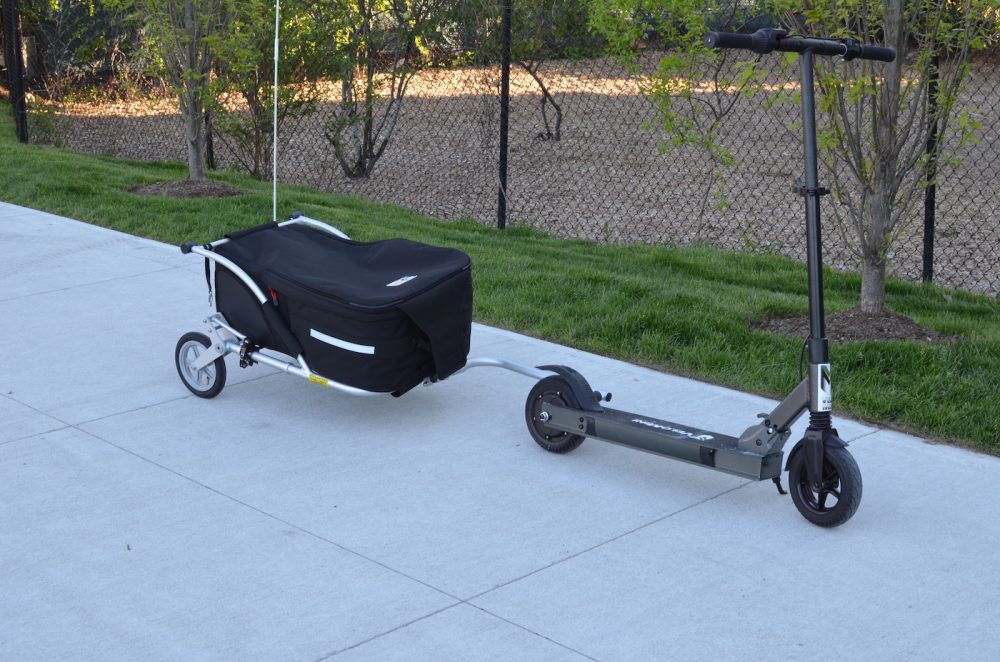 When the trailer is really loaded down you will definitely want to plan your stops in advance. While I didn’t use the stomp brake as much on the scooter by itself, I used it much more when pulling a trailer full of groceries.

I never thought an electric kickscooter could be a car replacing vehicle, but the VeloMini Scoot and T1 trailer have changed my mind. I actually don’t own a car as I only get around using micromobility machines like electric scooters, e-bicycles, and e-motorcycles. But if I did have a car then it would have been spending much more time in the garage.

Between the versatility/convenience of a folding electric scooter and the utility of a 60-liter cargo trailer, I was able to accomplish most of my daily errands and commuting needs. I’ve been impressed with the build quality of both and they make a great pairing. For times that I’m traveling farther distances, I plan on hitching the T1 trailer up to my e-bike as well. I think that will make an awesome long range cargo hauler and it means I don’t need a dedicated electric cargo bike. Instead, I can turn any e-bike into a cargo bike.

At $345, the T1 trailer certainly isn’t cheap. But it’s got much higher quality construction than cheaper trailers, so I think it is worth the price if you use it regularly. And the VeloMini is par for the course with a $599 price tag, which I think is also a fair price for the capable little machine.

What do you think of the electric scooter and trailer combo? Let us know in the comments below!