Despite what you may have heard on the street, mobility scooters aren’t exactly the most sexy of the micro-EV options out there. But they just got a bit cooler now that Daymak has launched an awesome new solar powered enclosed mobility scooter!

It even comes complete with all the creature comforts you could want, including air conditioning, back up camera, stereo system and more. Read on to see why I’m going to be the coolest millennial pulling up to the shuffleboard match in West Palm Beach.

The Boomerbuggy X by Daymak may just be a mobility scooter, but it’s a pretty tricked out one at that. The enclosed scooter is designed to be a more comfortable way for seniors to get around, regardless of rine, shine, heat or snow. In other words, this isn’t your grandpappy’s Rascal scooter.

The Boomerbuggy line consists of 4 different models, each with their own levels of accoutrements.

The entry-level Boomerbuggy XP includes a 2.7 kWh battery and a built-in heater. That battery is lead acid, though the extra weight isn’t as big of an issue as compared to other micro-EVs like electric bicycles and scooters. Grandma isn’t picking up her Boomerbuggy to carry it onto the subway. 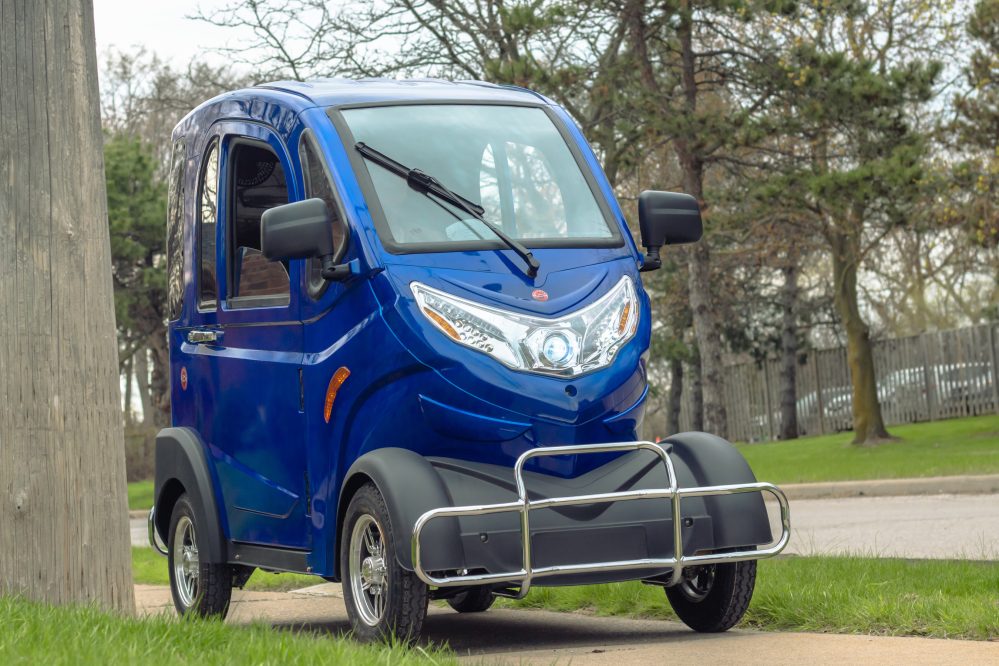 The next step up in the line is the Boomerbuggy X, which adds air-conditioning to the $5,999 base-level Boomerbuggy XP. That air condition bumps the price up to $6,999. Though when you’re cruising down Biscayne Blvd during an unseasonably warm April, that AC might be worth it.

Tack on another $1,000 and you can score the Boomerbuggy XI, which swaps out the 2.7 kWh lead acid battery for a fast charging 3 kWh Li-ion battery. Not bad, that’s nearly twice the battery capacity of my urban electric motorcycle!

And for a cool $8,999 you can purchase the créme de la créme of the Boomerbuggy line. Yes, I’m of course talking about the reason we are all here reading this – the Boomerbuggy XS. This bad boy adds the 80W high efficiency solar panel to the roof of the Boomerbuggy, giving geriatric speed racers nearly infinite range – as long as the sun stays out.

But that’s not all! The Boomerbuggy also includes features such as a built-in alarm, back-up camera, stereo sound system and storage for shopping bags.

And with a 1.2 kW motor and 60 km (37 mi) of range, no gated community can hold you in. Put the pedal to the floor (or, er…. actually twist the hand throttle) as you watch Ethel’s tulips grow smaller in your rear view mirror. You can throw caution to the wind and ride with reckless abandon – the no-slip hydraulic disc brakes and automotive-style seat belt will take care of you as you careen around corners at the Boomerbuggy’s blistering top speed of 13 km/h (8 mph).

And after a long day of cruising, feel free to make that detour to the clubhouse for the early bird special. You’ve been solar charging all day, you’ve got the range! 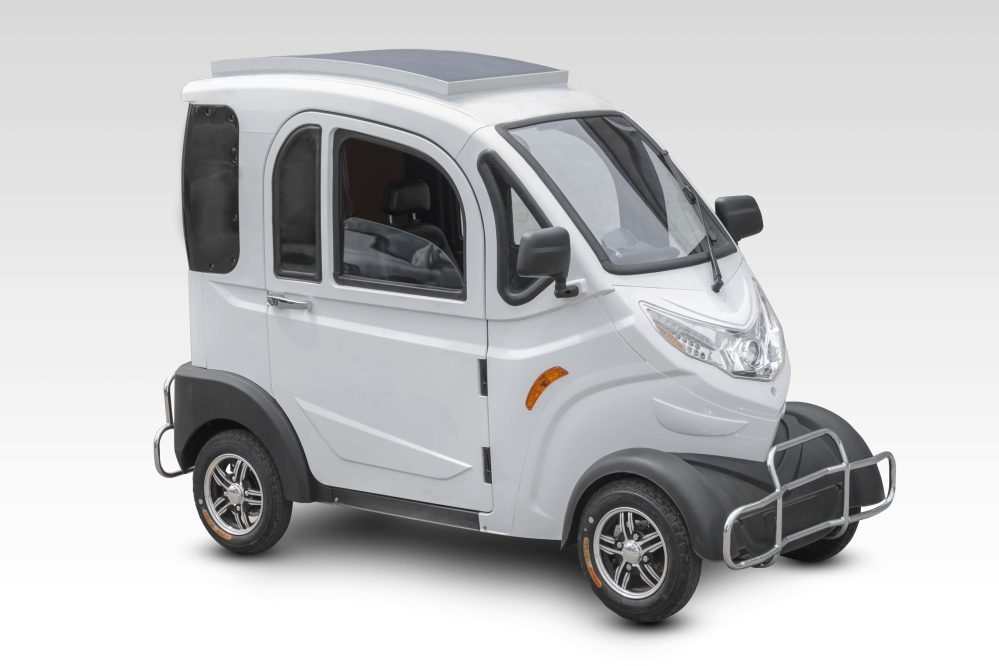 I jest slightly, but only out of envy. The Boomerbuggy X looks like a heck of a ride and I’d love to take this thing to my local supermarket or coffee shop, if it wasn’t for the limited top speed.

I also love the solar panel on the roof. Granted, 80 W isn’t going to charge that 3 kWh battery very quickly. Assuming decent sun, you’re looking at around 50 hours to charge the pack from 0-100%. Of course the battery will rarely ever be that empty. An hour of charge should get you nearly a mile of range, so unless grandma is scooting around more than 7-8 miles per day, the solar charger should do a pretty good job of actually keeping the pack nearly full.

I hope that I won’t have to use a mobility scooter for a while yet. But it’s nice to know that if that day arrives sooner than I expect, at least there are some pretty cool options already! And until then, at least I’ve got my 64 km/h (40 mph) 3.6 kW dual motor electric scooter!