Tesla promises to keep selling $35k Model 3, though claims few are ordering it 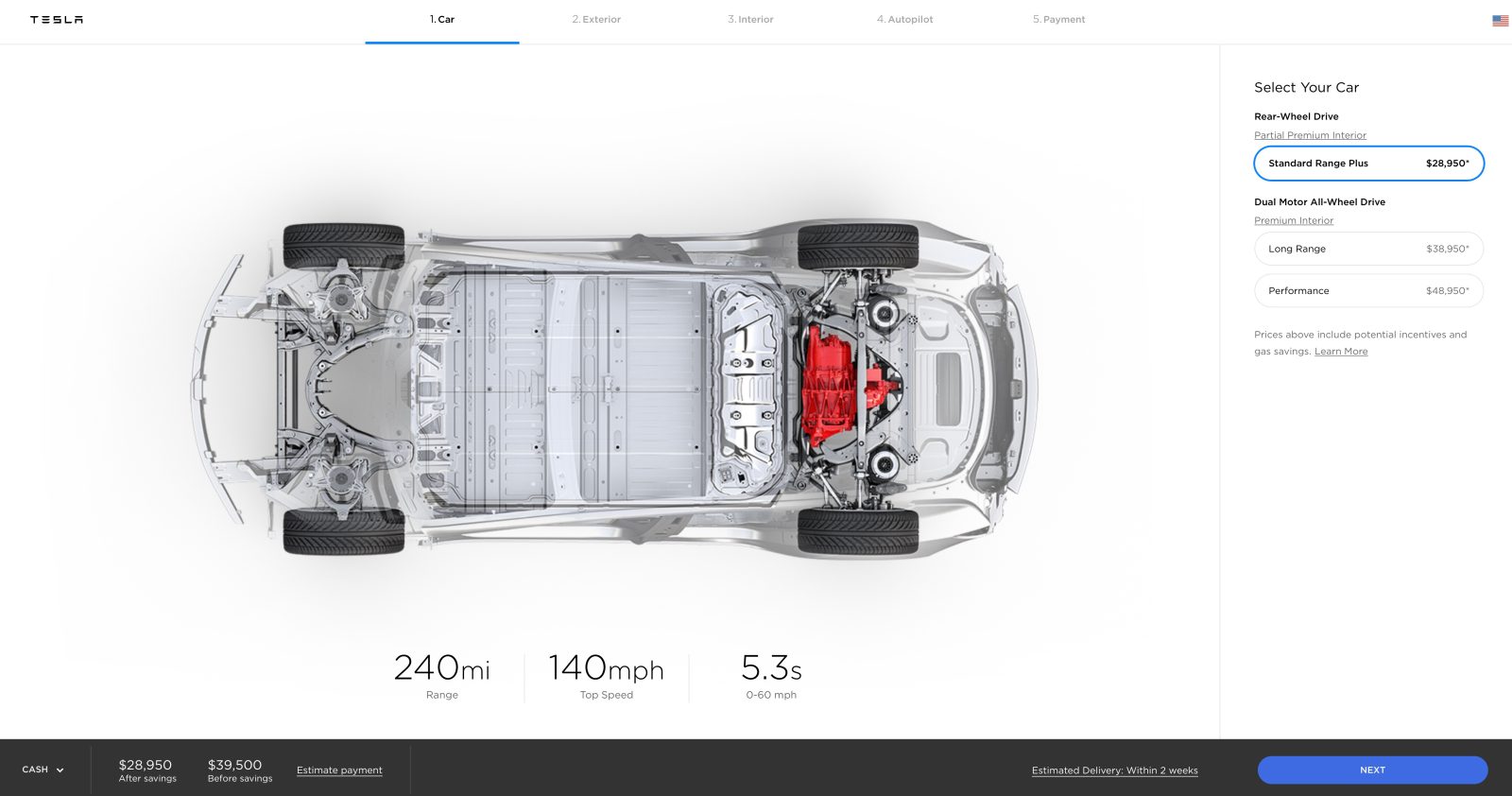 Two weeks ago, Tesla removed the $35k Model 3 from their website, making it an “off-menu” item.  When asked, they couldn’t answer how long the model would be available – causing many, including Electrek, to assume that this was an attempt to “kill” the car.

It looks like that death won’t pan out yet, as today during Tesla’s Q1 earnings call, CEO Elon Musk made the promise that the 35k Model 3 “is there and will remain there” for sale for an indefinite time period.

Releasing the $35k Model 3 was a huge accomplishment, the culmination of Tesla’s original “secret master plan” from 2006.

Since that announcement though, multiple developments happened.  Many early customers had their delivery dates cancelled with no firm timeline on when Tesla would pull through, and some ended up cancelling their order and buying another vehicle instead.  After Tesla was weird about it for a while, they eventually de-listed the car on the website but stated they would continue sales by phone or in person.  Finally, the first $35k Model 3 deliveries started just last week.

On today’s call, Musk mentioned that customers don’t need to “go through an obstacle course” to order the Model 3 Standard Range, that all it takes is a store visit or a phone call.  Despite this low additional barrier to purchase, orders have been quite low for the Standard Range Model 3, according to Musk.

Instead of the $35k Standard Range Model 3, Tesla’s website lists the $39.5k “Standard Range Plus” as the base model, which has Autopilot and about 10% more range than the $35k Standard Range car does.  The $35k car also doesn’t have access to various in-car features like music streaming, navigation with live traffic visualization, and heated seats.  These are all software-limited features, and customers can “upgrade” any time they want if they pay the difference in cost.

On the call, Musk stated that these features hit the “sweet spot” of good value for customers, and that the Standard Range Plus offers good bang for your buck, when compared to the $35k Standard Range car.  Customers seem to agree, given that the order rate on the $35k car is low.

Tesla also mentioned, both in today’s earnings letter and at Tesla’s Autonomy Day earlier this week, that a Model 3 robotaxi with full self-driving hardware and a battery pack capable of lasting for a million miles would cost “$38,000 to produce,” which notably is higher than the cost of a Standard Range Model 3.

First, a bit of a mea culpa from us.  We said Tesla had “killed” the Model 3, and perhaps we overstated it.  This was not just the opinion of one of us, but all of us on Electrek staff contributed to the editorial section of that post and we agreed that this move seemed like a clear attempt to kill the car, thus our headline.

In the article’s “Take,” we mentioned that the car wasn’t completely “dead,” but that since Tesla removed the model from the website and was never going to produce the base model pack or interior, it seemed like they had killed off any intent to take the building of this car seriously.

We also asked Tesla to comment on how long the Model 3 would remain available “off menu”, and they declined to comment.  We’ve heard nothing on that front until today, when Musk stated it “will remain” for sale.

As we mentioned, Tesla has made similar moves in the past with other models, notably the 40kWh Model S.  Tesla used the same justification for killing off that model, saying that consumer demand just wasn’t high enough.  This was after a long period of time of Tesla trying much harder to sell higher models than the 40kWh, convincing reservation holders to buy a 60kWh instead to get the car sooner, etc.

So Tesla: if you really intend to sell this car, why make it harder, why de-list and tell people that nobody wants it?  It sounds much like the justification you used for killing the 40kWh Model S, and we hope you’re not going to use it as eventual justification to kill this model.  We’d like to be proven wrong.

The fact remains that even though a call or store visit is a low barrier to entry, it is a barrier to entry.  A barrier which both means the consumer is unaware of the availability of the model when shopping around (since it’s not listed) and which means a customer must talk to a sales person who will make a great case for why all those amazing features are totally worth that additional ~12% increase in price.

And it’s true – the Standard Range Plus does seem like a pretty significant jump in value.  When it was first announced, many people who were holding out for the base $35k car jumped in and got a standard range, figuring the splurge was worth it.  Especially since, at the time, the comparison was against the eventual “standard” interior, which Tesla hadn’t (and still hasn’t) made and which did not offer Tesla’s synthetic leather interior.

If Tesla can’t sell the $35k Model 3 profitably yet, then they’re in their right not to try to sell it very hard.  But in that case, why introduce it to begin with?  Why not just wait until you can get costs down?  And how does this all bode for the eventual release of an even cheaper car, something which Tesla has claimed they want to do in the future?

If this is just an honest attempt to keep their promise but to direct customers in any way possible to buy higher-end vehicles, then that’s no big deal.  Companies want to sell more expensive products, we can accept that as a reasonable proposition.

We just think Tesla could have been less weird about this whole rollout – and rollback.

Regardless, the Standard Range car continues to be available, though perhaps on life support.  We’ll be sure to report on any more developments.