Xiaomi is better known for its wide range of electronics products, including everything from smartphones to vacuum cleaners. After getting its feet wet last year with the company’s first pint-sized electric bike, Xiaomi is back with a bigger and better model for 2019.

Xiaomi’s new electric bike is being marketed under its HIMO sub-brand.

The HIMO C20 is the latest e-bike produced by the company and falls into the ultra-budget e-bike category.

But despite being offered at a low price of around $375, the HIMO C20 electric bike packs in quite a few extra features normally found on higher priced e-bikes.

The HIMO C20 is powered by a 250 W rear hub motor and reaches a top speed of 25 km/h (15.5 mph). That should keep it street legal nearly everywhere in the world. While the US has higher speed and power limits for electric bikes, other areas including much of Europe and Asia have stricter limits. 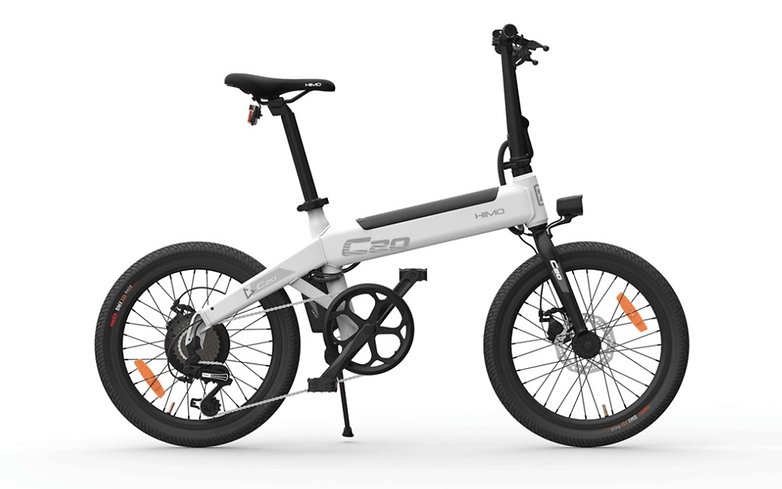 The battery on the HIMO C20 is a 36V 10Ah removable pack that provides 360 Wh of energy. Xiaomi claims the bike can reach up to 80 km (50 mi) on a single charge when using pedal assist. The charge is painfully slow though at 6 hours. But hey, how much can you ask for in a $375 e-bike?

The 20″ front and rear wheels sport disc brakes – not rim brakes. You of course can’t get hydraulic brakes at this price, but the mechanical disc brakes are likely sufficient for stops from 25 km/h (15.5 mph).

The aluminum-frame helps contribute to the total weight of 21 kg (46 lb) – relatively light for an electric bike. 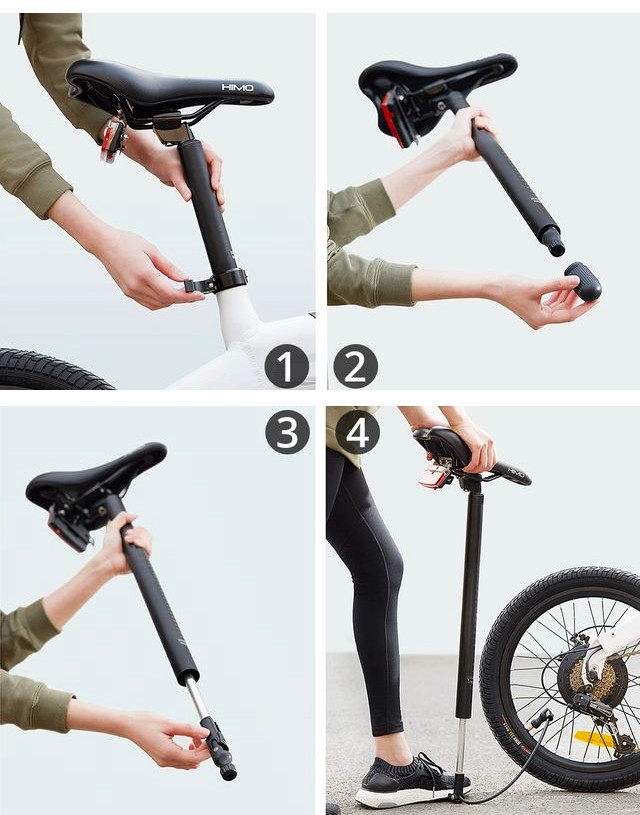 While there’s nothing shocking in the performance specs, the extra features included on the bike are quite nice for the price.

There’s an air pump hidden in the bicycle’s seat tube. If you ever need to pump your tires or swap a tube, you simply remove the seat and use the hidden pump.

The glossy LED display is actually quite nice looking. I’d argue that it might rival some of the nicer displays from larger companies like Bosch, at least on appearance. You still only get basic display info like speed, distance, battery capacity, and pedal assist level. There are no watt meters or options for other fancy data. 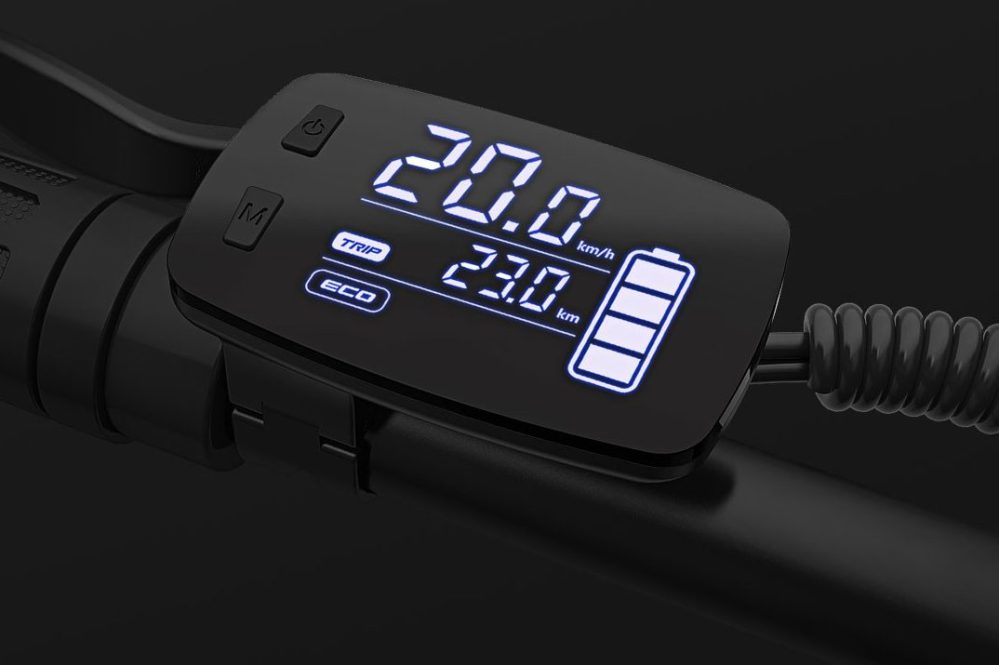 Front and rear LED lights are also included, and they run off the main e-bike battery. That means riders won’t have to constantly worry about keeping spare AAA batteries around.

These specs are all improvements over Xiaomi’s last electric bike. The HIMO V1 had a lower capacity 216 Wh battery, smaller wheels and only one brake. But for $261, it was a good start for the company.

Now with the new HIMO C20 electric bike, Xiaomi has stepped up its game to produce a more serious commuter e-bike while still keeping the price low. 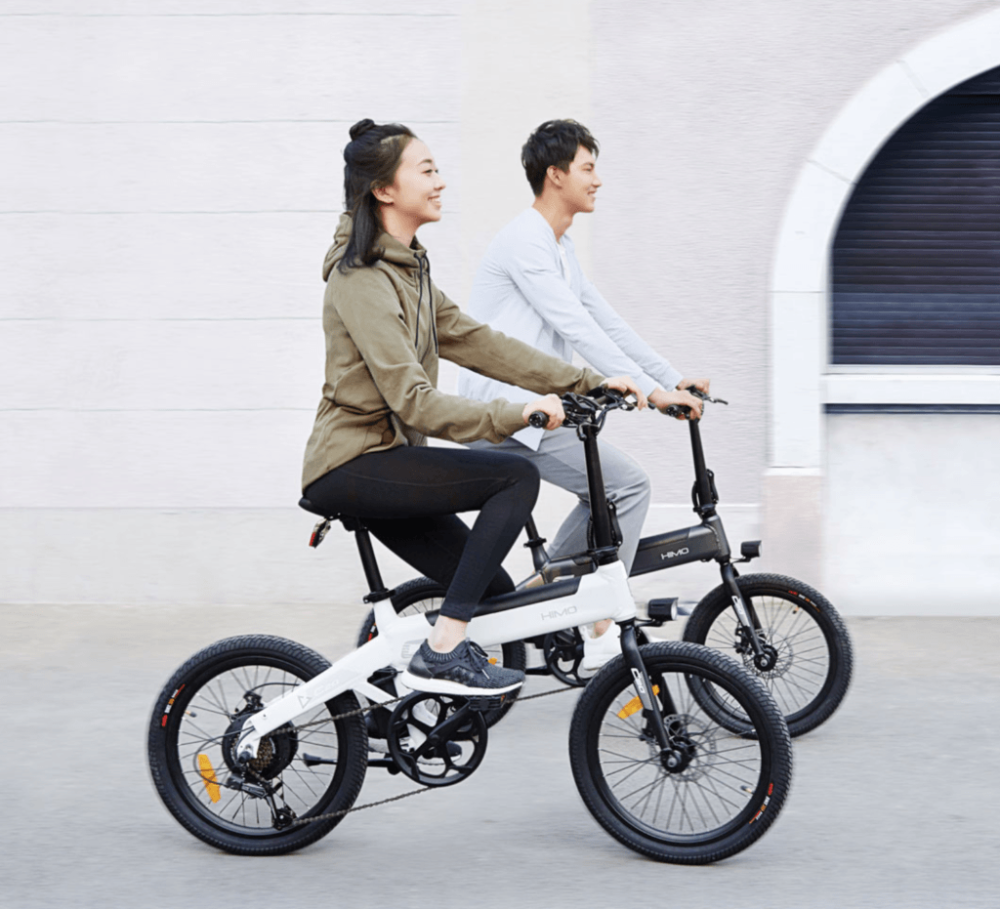 It’s already for sale domestically, but is harder to find outside of China yet. The e-bike is listed on sites like AliExpress with international shipping options, but the price is jacked up due to the lower supply.

The same thing happened with Xiaomi’s first e-bike last year. If history is any indication, we can expect the international prices to come back down to something more reasonable within a few months. The HIMO V1 is now available for around $400 from a number of international sources and the price keeps dropping.

In the meantime, there are a number of similar e-bikes already available, though perhaps not with all of the same features of the HIMO C20. Swagtron offers its EB-5 electric bike for just $499 as well as its EB-1 electric bike for $399.

We reviewed both of them and found them to be quite good e-bikes in terms of bang-for-your-buck, though the larger battery of the EB-5 makes it a better choice for all but the most budget-conscious shoppers.

And if you’re prepared to spend a bit more for a full-size electric bike, we recently compared two sub-$700 Amazon e-bikes.

None of these bikes are built to last for years of hard riding, but they’ll definitely get your feet wet and introduce new riders to the joy and convenience of e-bikes.

What do you think of Xiaomi’s ultra-budget e-bikes? Let us know in the comments below.