As Tesla moves towards more autonomous features on its vehicles, it has also been teasing a long-term goal of providing owners the opportunity to provide Uber/Lyft-like rides with their vehicles, letting owners make money in their off-time.

The system has been dubbed “Tesla Network” and last night, CEO Elon Musk announced that we’re going to hear more about it later this month.

Tesla recently invited investors to an event at their Palo Alto headquarters to show off the capabilities of their new hardware and show off their roadmap for future improvements.  This event was previously scheduled for April 19, but now has been moved to April 22.  The event will also be webcast for those who can’t attend.

Tesla Network is part of Tesla’s “Master Plan Part Deux,” which includes a step to “enable your car to make money for you when you aren’t using it.”

The announcement was made as part of a “tweetstorm” on twitter last night, which began with Musk answering a query from an owner about the internal camera in the Model 3.  As mentioned in our Model 3 review, all Model 3s have a camera on the rearview mirror, pointing into the car.  The user manual states that the camera is not activated yet, but some owners have wondered what it’s for.

It’s there for when we start competing with Uber/Lyft & people allow their car to earn money for them as part of the Tesla shared autonomy fleet. In case someone messes up your car, you can check the video.

We mentioned in our review that it was pretty clear this was the purpose of the camera.  And this isn’t the only way that the Model 3 has been built with autonomous driving in mind.

The car’s default key is a phone app which connects to the car with bluetooth and unlocks when you walk near with a paired phone.  This theoretically enables temporary keys to be sent out to people who rent the vehicle, then those keys can be revoked when the ride is over.  And also, the central screen is 1920×1200, with a 120px tall bottom bar for controls, leaving 1920×1080 resolution on the monitor – perfect for streaming HD video.

Whats exceptional about this is not that these are planned features, but that they already exist on cars being delivered today.  Even though Tesla Network is some way away from being implemented, cars today already have technology and design features which will prepare them for it.  Musk underlined this idea on twitter, while also announcing the new date for Tesla’s self-driving event:

That’s exactly the idea. What’s not well understood is that Tesla cars being made *today* will be able to do that for you. Just a matter of finishing the software & going through regulatory approval. Will be explained in depth via live webcast on April 22.

While today’s cars do not have the next-generation computer that will enable more self-driving capabilities, Tesla does plan to retrofit existing vehicles with the upgraded computer, enabling greater autonomous feats from current cars.  This computer was formerly called “HW3” but Tesla is now simply calling it their “full self-driving computer.”

The internal camera will see another use before then, though, as it will eventually be added to Tesla’s new Sentry Mode feature.  This feature uses the car’s external Autopilot cameras as built-in dashcams, and was recently enabled in software.  Currently Sentry Mode only uses the front and side cameras, but Musk mentioned that Tesla intends to add the internal camera to the system for more coverage:

Also, it can be used to supplement cameras on outside of vehicle, as it can see through 2nd side windows & rear window.

While we don’t have any photos taken from the internal camera itself, here’s a mockup of what the angle might look like, taken with a fisheye lens held up to the rearview mirror: 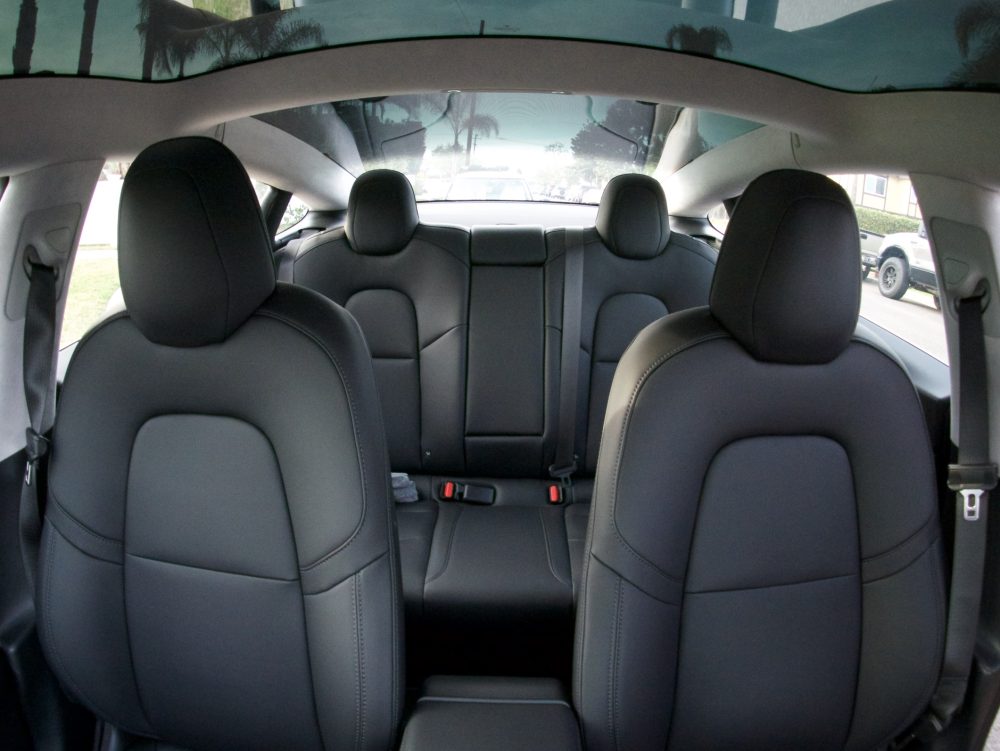 So it certainly does seem like it would offer a fairly good rear view, and possible a little bit of a side view, except for those pesky seat head restraints.  Combined with other angles, though, it ought to help a little.

While Tesla’s Autopilot is still nowhere near “self-driving,” Tesla intends to move forward towards it as quickly as possible.  They’ve been adding more features recently, including a red light warning and right-of-way for lane changes, and development builds can detect and stop at stop signs/lights.  They also recently sent out an update to Navigate on Autopilot making the experience more seamless and allowing the car to change lanes on its own without confirmation from the driver.

We’ll look forward to seeing what new capabilities they have to show us on April 22.

Incidentally, this event is happening on Earth Day – so perhaps you can watch it after going to your local Drive Electric Earth Day event, many of which will be hosted over Earth Day weekend (but several happen in the rest of the month of April – check out the events list!)