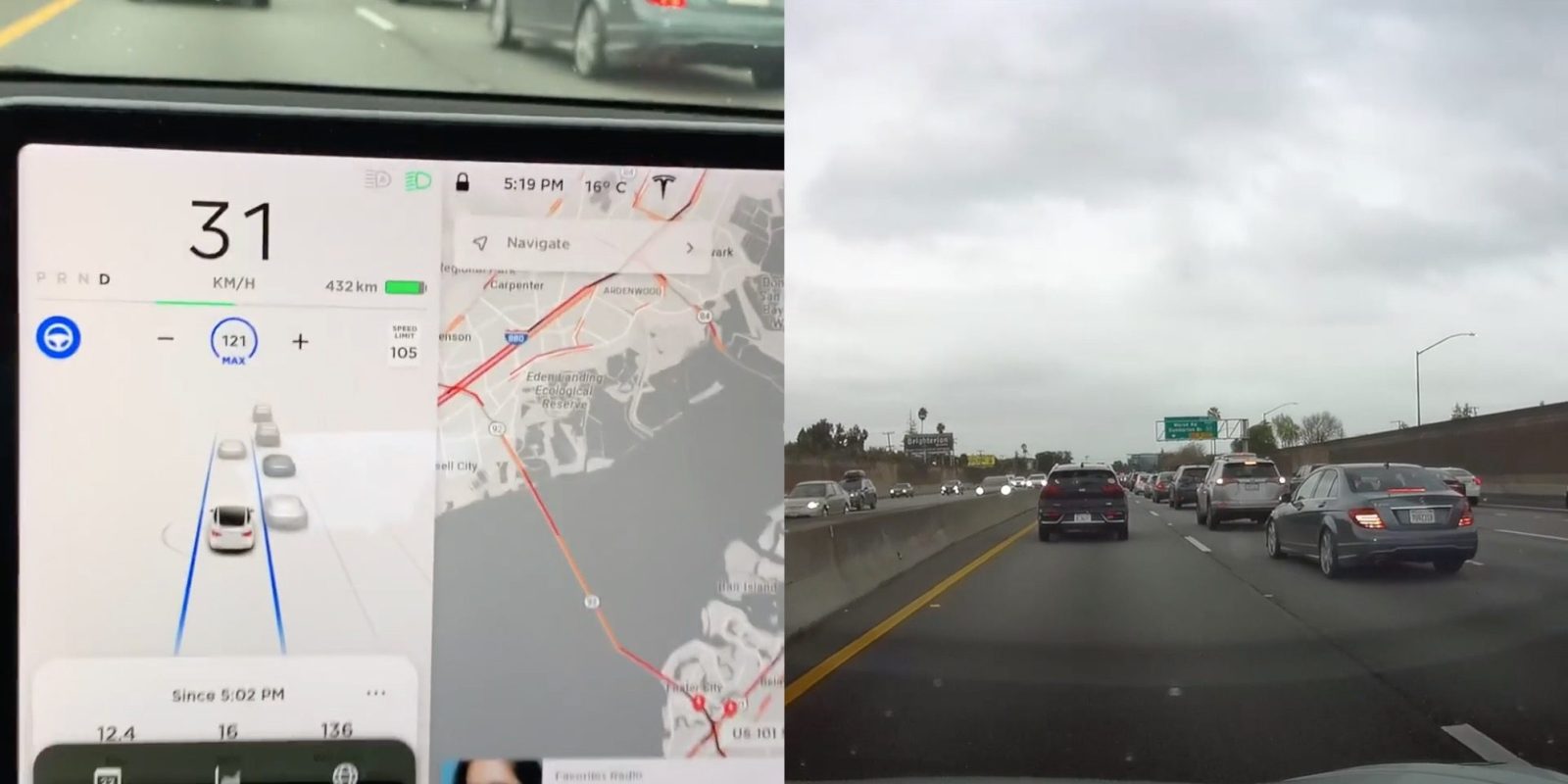 Tesla is continuing to improve Autopilot’s abilities in both documented and undocumented ways.  Just recently the system has gained two new capabilities: detecting stop lights and detecting lane change intention from other cars.

In the last few weeks, some drivers have noticed that Autopilot seems to be detecting lane change intention from other cars, then slowing down to let other drivers change lanes in front of it.

This was a hard thing to pin down, because in traffic it’s hard to tell if your car is slowing because of the car ahead, because another car is encroaching on your lane, because autopilot got overzealous and detected something that wasn’t there, or some other reason.  Autopilot does occasionally have “phantom braking” events where the car detects something and reacts surprisingly.

But now we have video evidence that this is happening, thanks to reddit user privaterbok.  He posted a video showing his Model 3’s display and dashcam footage side-by-side which indicates that Autopilot saw a car intending to change lanes then applied brakes to make room for said car.  His Model 3 is on software 2019.5.15, which started rolling out about two weeks ago.

The footage shows a Mercedes, with turn signal on, changing lanes into the lane to the Tesla’s right, stopping briefly and then continuing to change lanes in front of the Tesla.  When the Tesla notices the Mercedes, the car turns darker on the Model 3’s in-car display, indicating that Autopilot is paying attention to it.  Shortly after that, the Model 3 applies the brakes, slowing to a crawl and giving the Mercedes room to get into the lane.  This happens despite the car in front of the Model 3 pulling away.

So this definitely looks like an intentional lane change detection on the part of Autopilot.  Whether it was responding to the turn signal or the movements of the car we can’t say for certain, but since drivers have suspected for a couple weeks that their Tesla was detecting turn signals, it seems likely that Autopilot is now capable of this.

Just a couple weeks ago we learned that Autopilot started detecting lines at intersections.  We also recently heard from Tesla CEO Elon Musk that Autopilot would be able to handle traffic lights “soon”.

With the new 2019.8.3 update, Tesla added an update note about an “Autosteer Stop Light Warning” feature.  Here’s how it works:

Your car may warn you in some cases if it detects that you are about to run a red light while Autosteer is in use.  This is not a substitute for an attentive driver and will not stop the car.

It’s not exactly a self-driving feature yet.  It sounds like the language Tesla (and other manufacturers) use to describe an Automatic Emergency Braking system.  This feature helps apply the brakes when a slowing car or other object is detected ahead.  Rather than promising to eliminate actions entirely, these systems aim to reduce the severity of an accident.

So you still have to pay attention while driving your Tesla.  But in the event of a small distraction, your Tesla may have just gotten a little safer.

It looks like Autopilot might have the effect of not just making people safer drivers, but more courteous ones as well.  We’ve all encountered the type of person who will speed up when they see your turn signal and not let you in.  Fisker even made an April Fool’s Joke to this effect, stating their (joke) “Level 6” autonomous system would be able to aggressively nudge other autonomous cars out of the way.  That was just a joke – but Tesla’s software here is real.

We also just got a demonstration of “Enhanced Summon” a few days ago, a feature which allows limited autonomy in parking lot situations.

For those familiar with Musk’s Autopilot pronouncements, sometimes they’re a little optimistic.  But this time, “Elon Time” must have switched over to Daylight Savings, because it seems like the Autopilot improvements are coming pretty quickly these days.  Between enhanced summon, stop light detection and lane change detection, Autopilot has seen a lot of improvement over the course of less than a month.

I’m still not optimistic about “full self-driving at the end of this year,” particularly since it seems to have been coming “this year” for the last few years now.  Tesla has continually stated their intention to take a car on an autonomous coast-to-coast trip.  They first planned to do it in 2017, but that year passed by, as did 2018, without event.

But Tesla has surprised us in the past.  Before Autopilot came out, the Model S had zero autonomous or driver-assist features.  At the time, Musk stated that he thought Tesla would be the leader in autonomous driving by the end of the year.  Many scoffed at this, but when Tesla showed off Autopilot for the first time, sure enough they were catapulted from the back of the pack to the front.  Early Autopilot tests ranked it ahead of other manufacturers’ driver-assist packages in terms of capability and ease of use.  Tesla continues to maintain this lead to this day, with other manufacturers coming close to matching their capabilities but Tesla holding at or near the front of the pack at all times.

So maybe, with this quick succession of improvements, we’re going to start seeing more deadlines get hit instead of missed.  Just don’t fall asleep in your car, though, because we’re not quite there yet.