Lightning Motorcycles, the California-based electric superbike manufacturer, has a highly anticipated electric motorcycle debuting next month. So far they’ve shown us a few teasers revealing little more than the headlights. Today though they got generous and are lifting the veil slightly on their upcoming sportbike designed more for the street than the track.

The company shared the first ever photo of the Lightning Strike’s new motor and it revealed even more details than anticipated.

Lightning sent us a teaser photo today meant to highlight the motor in their upcoming $12,998 Strike electric motorcycle.

Along with the photo, the company gave us a little more insight into the design:

“Based on the architecture and innovation in the Lightning LS-218 Superbike, Strike’s motor is fully liquid-cooled and engineered for track-ready performance. As far as we’re aware, LS-218 is currently the only electric motorcycle in the world with the technology and ability run flat-out at qualifying racing speed, pull in for a pit stop to fast charge and continue racing – all without ever overheating. Strike shares these exclusive performance characteristics while being fundamentally designed to be the ultimate street bike.”

The LS-218 electric superbike is Lightning’s first model and the current world record holder for fastest electric motorcycle. It was clocked at a blistering 218 mph (351 km/h) on the Bonneville salt flats. Its cooling system is critical to its performance, and that technology seems to have worked its way into the upcoming Strike model.

Below we can see the first photo of the Strike’s motor. 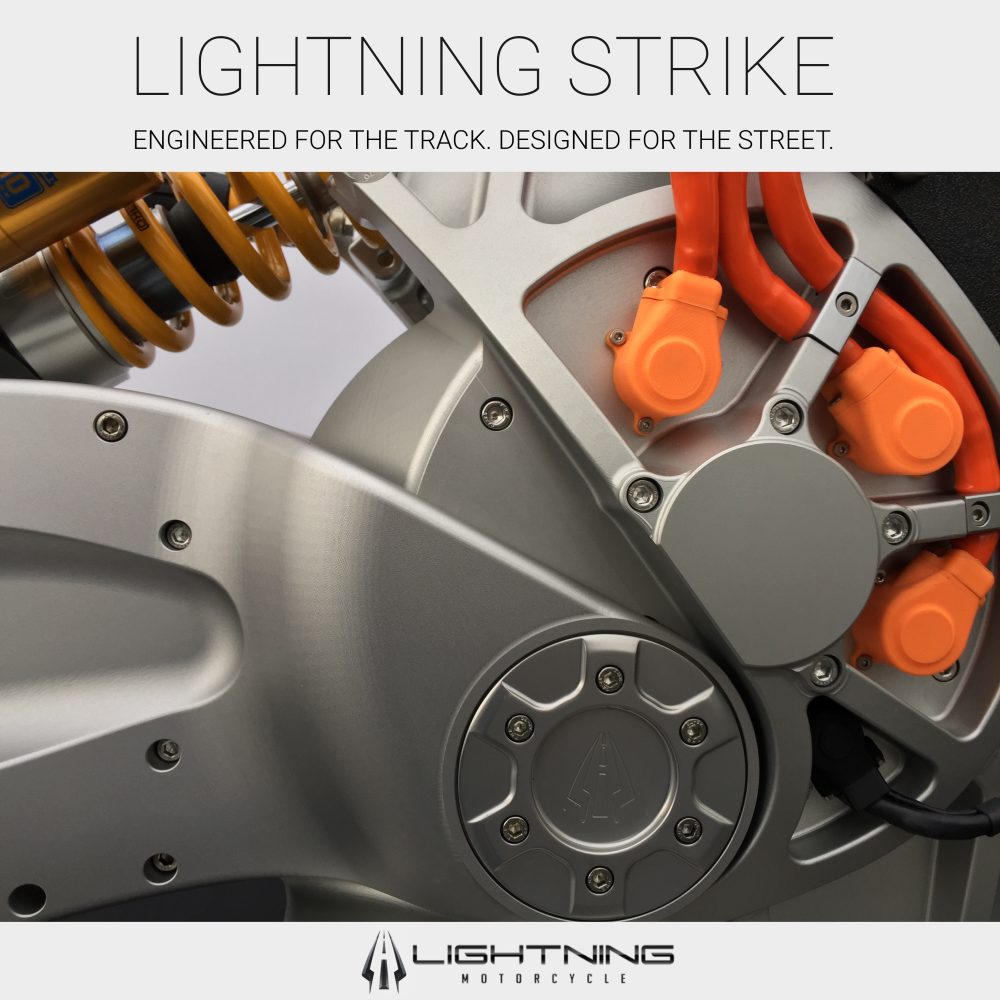 While we can’t actually see the liquid-cooling plumbing, a number of other details are visible.

Three bright orange high voltage cables are seen entering the side of the case, which would be expected on most three-phase DC brushless motors. Another set of cables exits the lower portion of the motor, likely for sensors such as temperature and motor position.

Perhaps more interesting are some of the other clues that the photo shows off. The frame and swing arm both look like CNC machined aluminum to me. Considering the high performance and long range of the 150 mph (241 km/h) and 150 mi (241 km) range bike, optimized weight savings from a CNC machined aluminum frame could be critical.

And what’s that hiding in the corner of the photo? Öhlins suspension, and perhaps a Hypersport model? It’s too soon to say for sure, but it looks like Lightning is putting some pretty high performance parts on this bike.

In doing so, they’re taking a shot directly across Zero’s bow. As the most likely direct competition to the new Strike, Zero’s bikes might have some catch up to do. Currently the Z-FORCE motors used by Zero are all passively air-cooled, which can be a sticking point when overheated motors force the bikes into low power “limp” mode. But with Zero’s new SR/F high performance electric motorcycle set to launch later this month, perhaps they’ll have an answer to the Strike’s increasingly impressive spec sheet.

Until then, you can be sure that Lightning is doing all it can to position the Strike as the go-to electric street bike. As the company made clear:

“Lightning has spent years of focused effort developing electric motorcycle technology to compete head-on with the best gas bikes in the world. Now we’re bringing everything we’ve learned into volume production with the all-new Lightning Strike – launching this March.”

Hang in there, because the electric motorcycle wars in the US are getting hotter than ever, despite the liquid cooling!