Electrek was front and center at the event to report on the impressive array of tech included in the Greyp G6 — much of it never before seen in an electric bike.

Greyp is the sister company of Rimac, the electric automaker famous for its Lamborghini-crushing Concept One electric hypercar.

That innovative tech and novel design from the electric hypercar company were front and center in a number of new features.

The Greyp G6 electric mountain bike sports a 36V 700 Wh battery powered by LG cells. The battery should be sufficient for 100 km (62 mi) of range.

Instead of hiding the battery like many e-bike makers, Greyp put the removable hexagonal battery on display in the central portion of the G6. 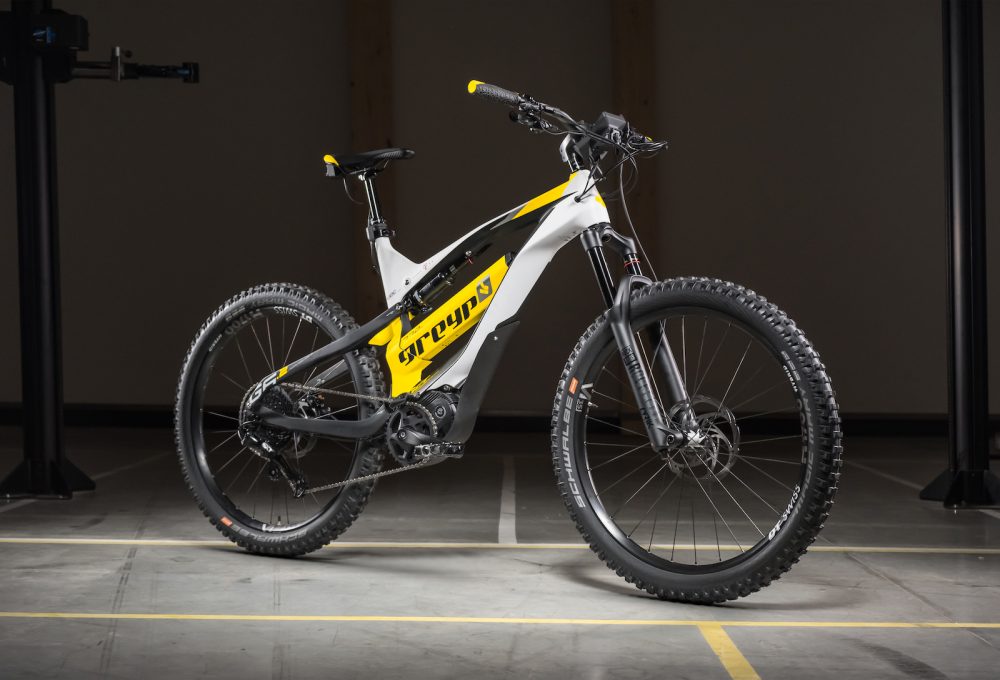 The G6 is powered by a 250 W nominal, 450 W peak mid-drive MPF motor that was specifically adapted for Greyp with the company’s own firmware.

The 100% carbon fiber frame was custom developed at Greyp using the experience gained from the Concept One electric hypercar. The frame uses more of an enduro styling and offers 150 mm of travel from a Rockshox suspension set. 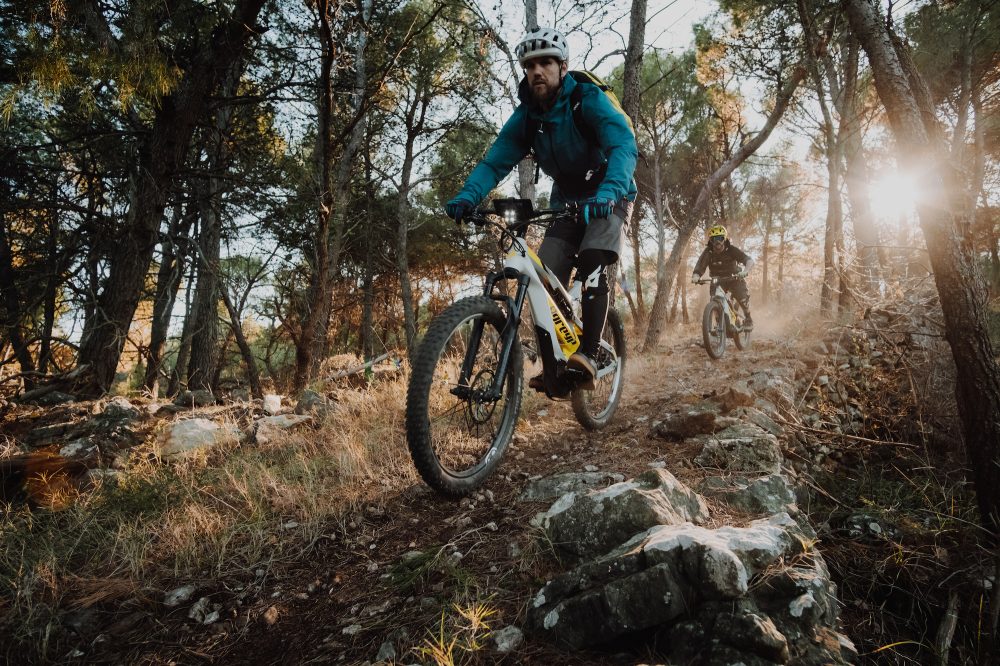 The electronics suite on the Greyp G6 is managed by a Central Intelligence Module (CIM) on the stem.

The 1080p 30 fps wide angle cameras are primarily designed for video capture during riding. As part of the unveiling, the audience was surprised with the live feed from two Greyp G6s outside the venue. The original plan was for the two to race head to head around the city, but because this is real life and not a movie, of course one bike had to get a flat tire. But it was still exciting to watch the live feed of the other G6 rider’s camera as he weaved through the tight streets on his way to the venue. We followed his point on the map in the Greyp accompanying app until he burst through the front entryway and up onto the stage, all of it constantly streamed live from the G6’s front camera.

There is also a dedicated sharing button on the bike’s handlebar controls. If something interesting or exciting happens on a ride, a press of the button will automatically save the last 15-30 seconds of video and upload it to the rider’s social media account for sharing with their friends and followers. Additional data can be chosen for inclusion for overlay with the video, such as the bike’s energy usage, speed, air-time, etc. 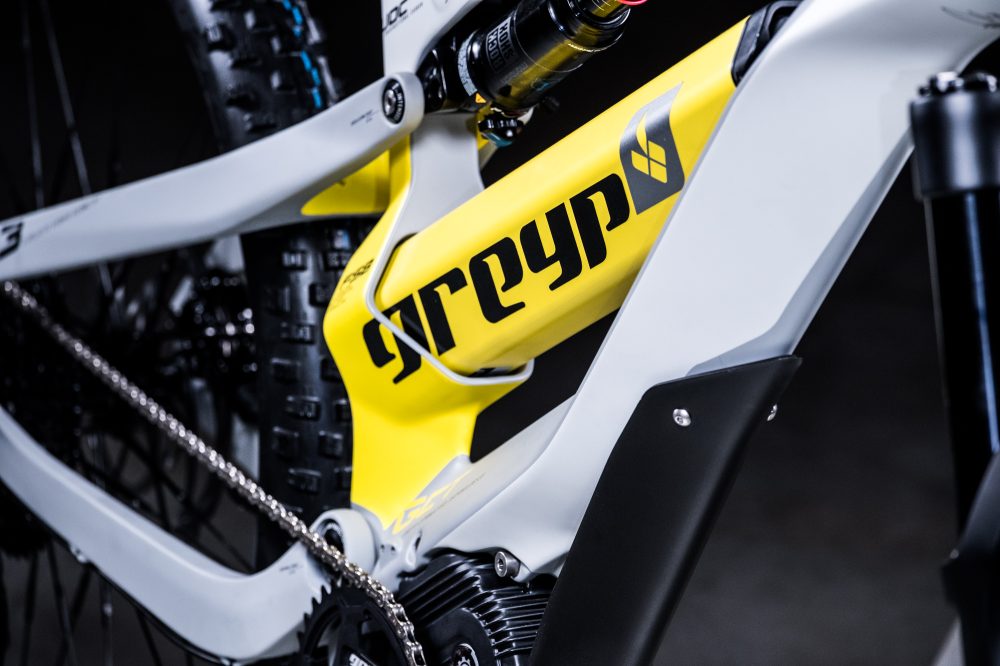 That kind of connectivity is enabled by the eSIM module designed by Greyp. It allows the bike to be constantly connected to 4G telecom data without the need for a SIM card (with software taking the place of a conventional SIM card), and offers other interesting features as well.

Not only does it provide theft prevention, but Greyp also programmed in their own version of Tesla’s Sentry Mode, where if the bike is touched while parked, it will alert the rider’s phone and give them access to the camera feed to see who is messing with their bike. The rider can then choose to remotely disable the bike to prevent it from being ridden away or used by the thief. And considering that these systems have been under development for years at Greyp, it’s quite likely they actually had the system designed before Tesla. 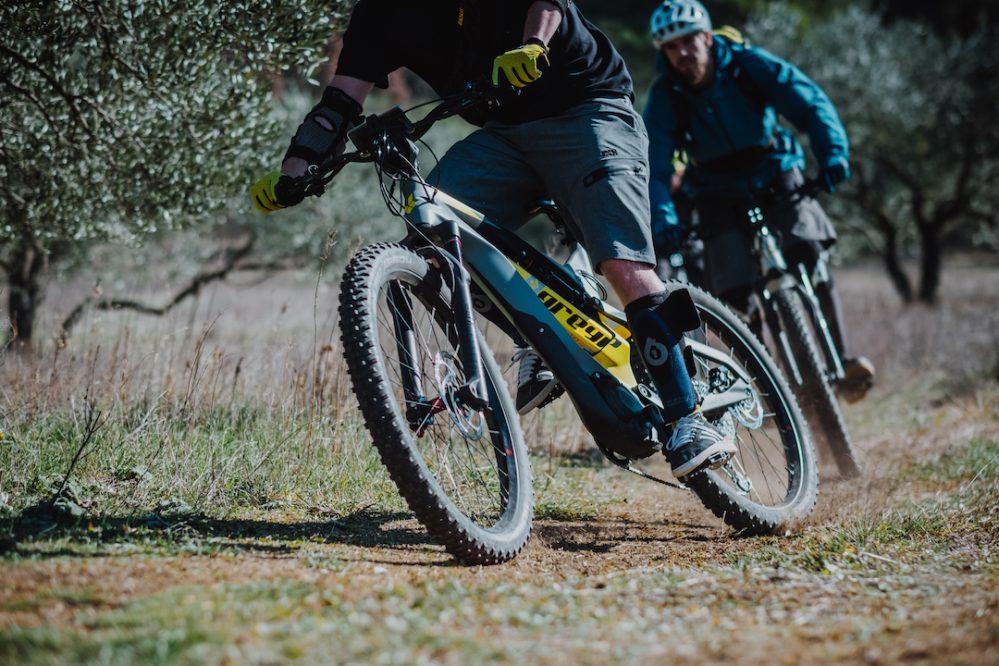 “All bikes will come with free connection until at least 2022. Depending on our negotiating skills, perhaps even longer,” laughed Mate Rimac, CEO of Greyp, as he presented the bike’s features.

With a phone mounted on the bike in dashboard mode, the Greyp G6 can provide a huge amount of information including not only the standard info such as speed and charge, but also GPS mapping and predictive range. Riders can find a point on the map such as a mountain peak and the computer will calculate whether they have enough juice in the battery to reach it, or plan a point-of-no-return for them if the rider doesn’t want to be stuck pedaling. 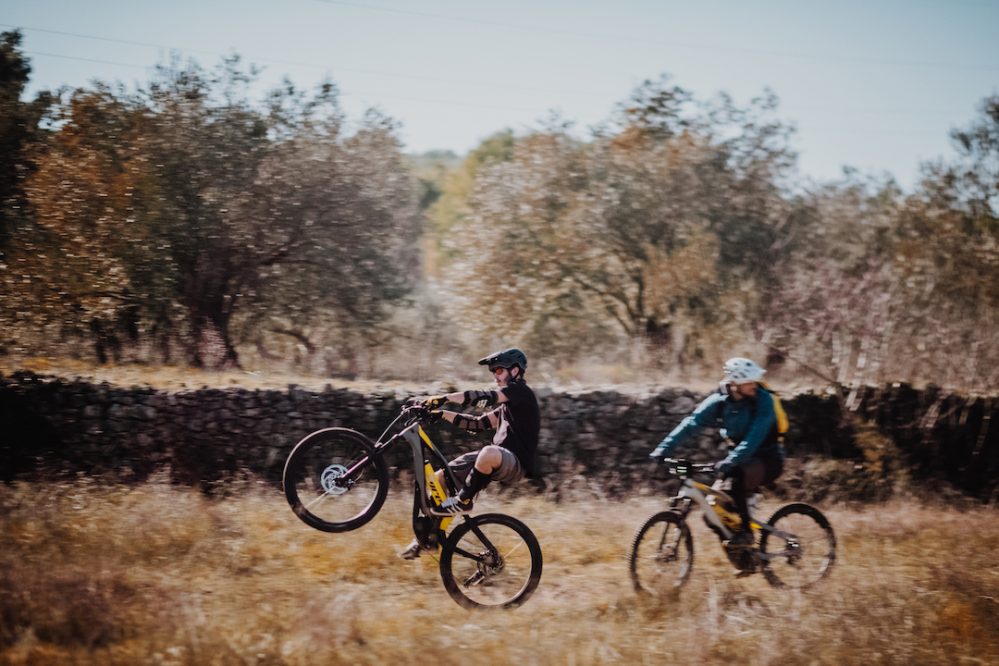 Greyp has also designed gamification directly into the G6. Bikes can connect to compete against each other on stats such as top speed, most power (combined human and motor), longest ride, highest jump, highest efficiency, and many more. Riders can either compete with their friends or strangers from around the world. The live video can be fed to competitors screens so that riders in different countries can see each other’s videos in real time while riding and competing in different challenges.

According to Mate Rimac:

“Unlike traditional bike manufacturers that are basically combining push-bikes with electrical components, we have developed the bike around an electrical drivetrain, a bunch of sensors and advanced connectivity. The systems features and eco-system that we are showing today are much more important than the bike itself. I believe that we succeeded in combining both cycling and the digital experience by integrating sensors and cameras, connecting bikes to the internet and developing an eco-system to create a completely new riding experience. We invested four years into the development. We believe this bike is the turning point for our company, and if I can put my modesty as aside for a moment, will stir up the industry at least a little bit.”

We’ll update when we have more info on specs and pricing. The G6 is already available for order and should begin shipping in a matter of weeks. It’s already undergoing production right now in Greyp’s facility next door to Rimac.

Let’s forget about the price for a minute. I know, it’s really high. It’s higher than the most expensive e-bikes I’ve ridden.

But let’s look at all of this technology. This thing has more sensors in it than a lot of smartphones! How many e-bikes have cameras, gyroscopes, 4G connectivity, integrated sharing and live-view anti-theft protection? Heck, how many electric cars have all of those things?

This is truly a groundbreaking electric bike. I have no doubt about that.

And it’s not just the technology suite either. The bike itself is incredibly well designed and built. It’s got a great quality motor, a huge capacity battery, a state of the art carbon fiber frame and top of the line suspension and braking components. High-end mountain bikes cost more than this and aren’t even electric. And they don’t have cameras.

Alright, now let’s talk about the price. Yeah, I know. Believe me, we all know. When it was announced, there was an audible gasp from the audience of a few hundred. Seriously.

It’s expensive, but what can you expect from the maker of a $1M hypercar. They didn’t set out to build an affordable e-bike. They set out to build an e-bike that would drive the industry forward, cost be damned. In the next year or so we could see these innovations trickle down into more affordable bikes from competitors. Until then, the Greyp G6 stands alone as an e-bike upon a hill, a beacon of hope for those who have felt the e-bike industry hasn’t shown any innovation in quite some time.

And as if this thing wasn’t cool enough, yours truly is going to get the first test ride of the bike tomorrow. So stay tuned for the first ride review right here on Electrek!