A Tesla Model X was found burning to almost nothing on a frozen lake in Vermont and it’s unclear how it ended up there.

“At 8:00 in the evening of February 24, we noticed a bright light on the ice on the surface of Shelburne Bay on Lake Champlain. Through a telescope, we could see it was a vehicle, and it was burning really hard. We called 911 and my sons skied out to the scene to investigate. The fire had numerous small explosions, and in time, it was apparent that very little was left. Through a telescope, I suspected it was a side-by-side UTV, since no body panels were visible, and a roll cage structure was apparent through the flames. Firefighters arrived about 30 minutes later and told my kids it was a Tesla, and that the occupants had thankfully exited the vehicle.”

The next morning, he went to check it out for himself and was able to confirm that it indeed was a Model X as evidenced by the reinforced B-pillars.

“When they got home and told me, I thought they were pulling my leg. But just to be sure, I checked in the garage to make sure my Model 3 was still safe and sound. The next morning I walked across the ice to look at the vehicle and found that yes, indeed, it was a Model X. It was fully burned, the body was pretty much gone. It makes it easy to see where the steel reinforcement is! “

He posted the following picture of the aftermath of the Model X fire: 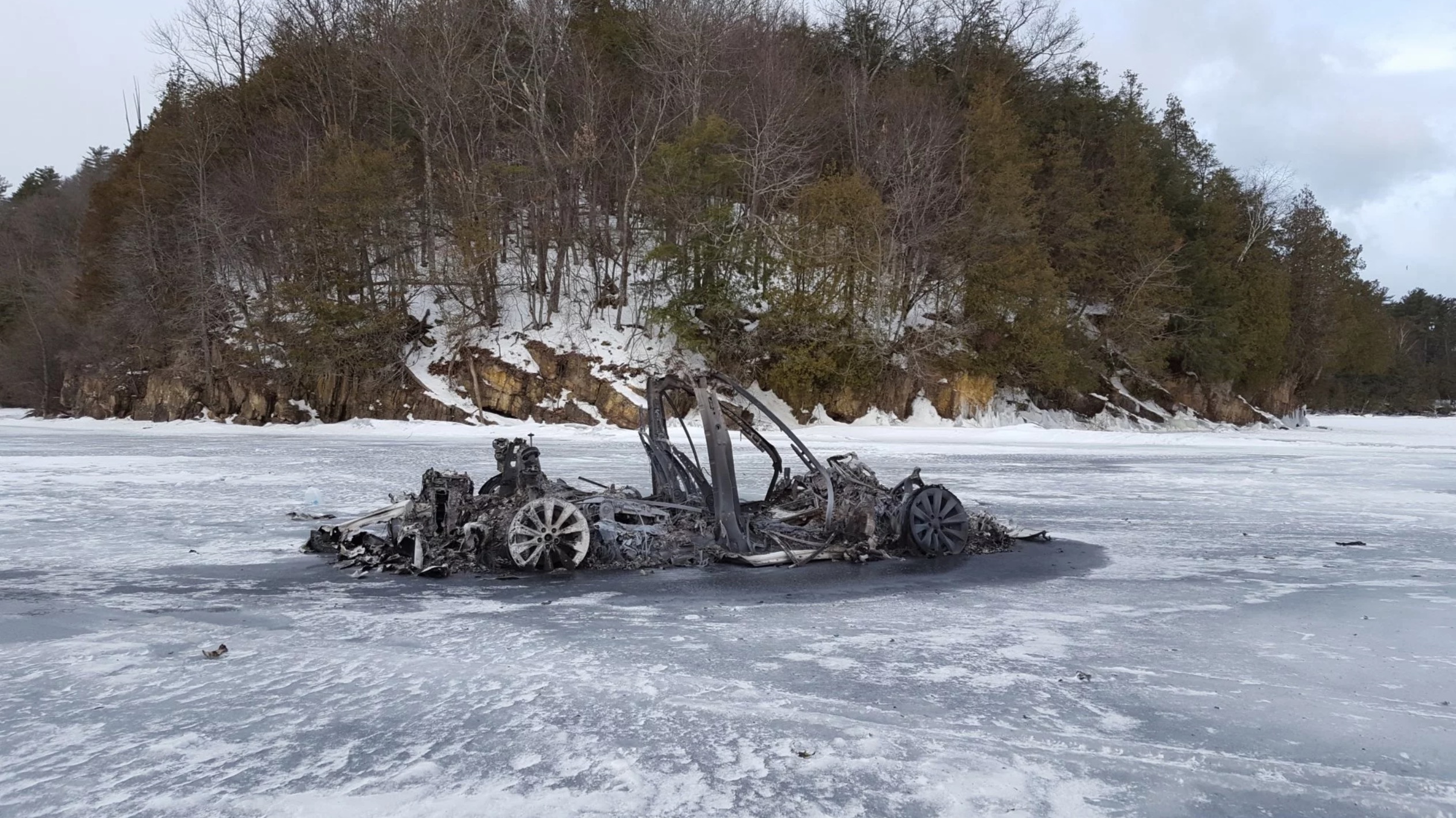 At this point, it’s still unclear how the vehicle ended up on the lake and how it caught on fire. The local news hasn’t reported on the strange find.

We contacted Tesla about the situation and we will update if they have a comment.

Fires involving Tesla vehicles are coming back into the spotlight recently, especially after a Tesla driver died in his burning car after a crash last weekend.

Despite many reports of Tesla fires, there is currently no data showing that Tesla vehicles catch on fire at a higher rate than gas-powered vehicles.

Well, that’s a strange one.

If anyone has any information about this, please reach out because I’m curious about what happened here.

As usual, I’m not really worried about Tesla fires after a crash because that’s quite normal with any vehicles, but there have also been some instances of Tesla fires without a crash.

In those cases, I think it’s important to investigate and understand the root cause.

As for this specific case, it looks unlikely that the Model X was involved in a crash on a frozen lake, but it doesn’t mean that the fire started on its own either.

It could be a case of arson. Stolen vehicle or insurance fraud kind of thing.