Today in EGEB, a new comprehensive wind report from Europe. Auto emissions talks stall out between California and federal officials. A report details the lobbying history of a current EPA administrator. Ford will power a number of plants and buildings with 100 percent renewable energy.

European wind advocacy group WindEurope just release a new report, Wind energy in Europe in 2018. The report offers a wide view of wind power on the continent over the past year. And the numbers could be positive or negative, depending on how you view them.

On one hand, 2018 was a record year for new wind capacity financed in Europe. 16.7 gigawatts worth of projects reached Final Investment Decision in future capacity. Of this future capacity, 12.5 GW is in onshore wind, and 4.2 GW is in offshore wind.

Wind energy now accounts for 18.4 percent of the EU’s total installed power generation capacity. The EU also installed more wind energy capacity than any other form of electricity generation in 2018.

Also, wind and solar saw more than 18 GW of new capacity installed in 2018, while new natural gas and coal installations didn’t even reach 1 GW. The WindEurope graphic below reveals the considerable progress of wind (and solar) power over the past decade in total capacity. 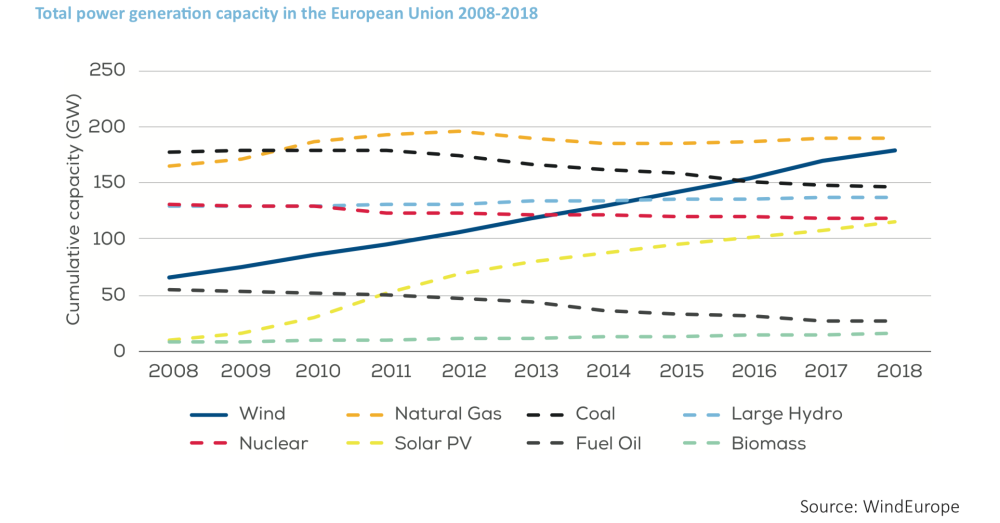 The report also notes that 14 countries had no new wind installations at all in 2018, and 12 of those nations are EU-28 Member States.

California is one of a number of states at odds with a Trump administration’s proposal to freeze fuel efficiency standards after 2020. The state is also seeking the authority to enact its own stricter rules. But at this point, a resolution still seems far off.

The California Air Resources Board (CARB) has met with officials from the White House, the EPA, and the transportation department on the matter. But those talks have ended, as Reuters reports.

Nothing substantial came of recent discussions according to CARB spokesman Stanley Young, who said,

“The administration broke off communications before Christmas and never responded to our suggested areas of compromise — or offered any compromise proposal at all. We concluded at that point that they were never serious about negotiating.”

It’s unclear what will happen next. But the existing proposal plans to cap fuel economy requirements around a fleet average of 37 mpg starting in 2020. Obama administration rules called for automakers to reach a 54.5 mpg average by 2025 as a move to both improve fuel economy and reduce greenhouse gas emissions.

Bill Wehrum was formerly a utility lobbyist before joining the EPA under Trump as an assistant administrator. That’s no secret. But a new report from Politico reveals “the nation’s biggest coal-burning power companies” paid Werhum’s former firm “millions of dollars to fight a wide range of Obama-era environmental rules.”

“Twenty-five power companies and six industry trade groups agreed to pay the firm a total of $8.2 million in 2017 alone,” the report notes. Utility companies Duke Energy, Southern Co., and AEP were all major contributors to the firm.

Documents show Wehrum met with power industry clients in 2017 “to lay out a road map for attacking the very policies he now oversees.”

Ford Motor Co. will use 100 percent renewable energy to power its Dearborn Truck Plant, the Michigan Assembly Plant, and a number of other Detroit buildings, Crain’s Detroit reports.

The automaker will purchase about 500,000 megawatt-hours of wind power from DTE Energy Co.’s MIGreenPower program. Ford’s global director of energy and technology George Andraos said in a statement,

“Ford supports the implementation of renewable energy where the project can be tied to the customer’s facility, either directly or through the local distribution utility, and we believe that supports local jobs, improves the local environment and adds resiliency to the local grid.”

Crain’s reports that Ford will reveal “a new global carbon reduction strategy that will focus on renewable energy” this June.

This year, Ford announced it will release electric versions of all its cars in Europe going forward, though those options may include hybrids. The automaker is also rumored to be interested in Volkswagen’s MEB electric platform. Ford and Volkswagen recently announced an “alliance” which may eventually involve autonomous and electric cars.