New data from Eurostat shows how many European Union member states have reached their 2020 renewable energy goals, as of 2017. The EU as a whole aims to get 20 percent of all its energy from renewable sources by next year. But its 28 member states all have different goals, ranging from 10 percent to nearly 50 percent of energy share.

The graphic from Eurostat below illustrates which countries have reached already reached their targets…and how far some have to go: 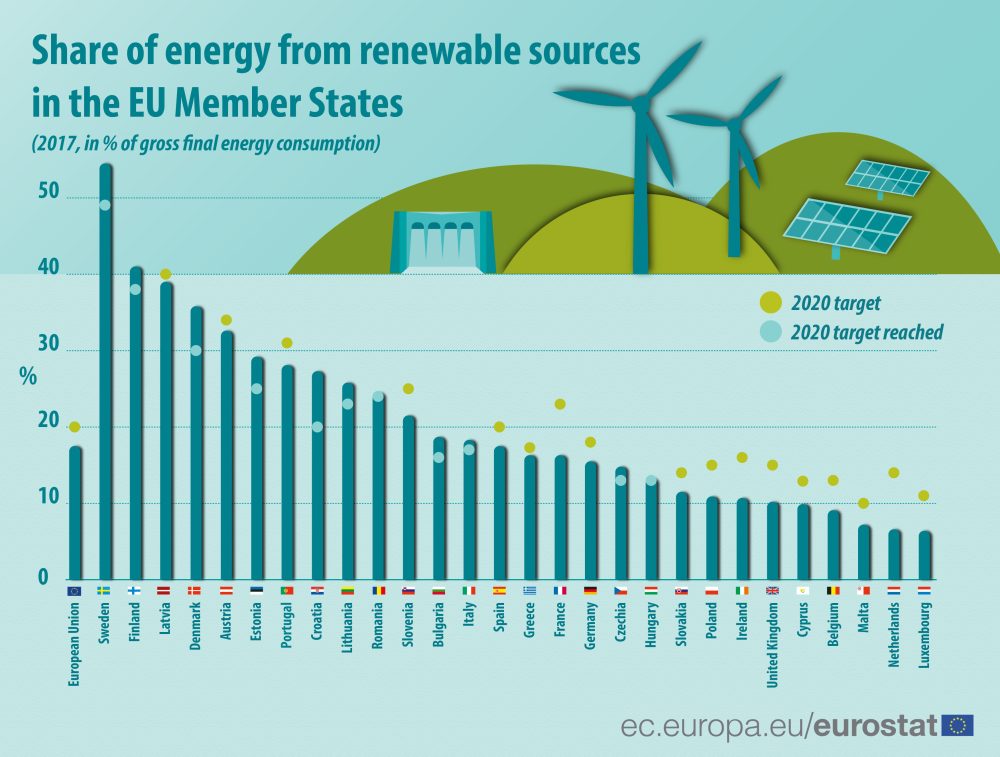 Thus far, 11 of the countries have already hit their goals, including Sweden (which now gets more than half its energy from renewables) and Finland (over 40 percent). A few other countries, such as Latvia, Austria, and Greece, are very close to hitting their marks, as well. Considering these are 2017 numbers, it’s possible a few of these nations have since reached their goals.

But the majority of the EU member states have yet to meet their goals, and it’s not looking good for countries like France and The Netherlands.

A new article in pv magazine details the efforts of Dr. Miguel Oneto to start solar parks in Texas. His two projects — one under construction, one to start later this year — will make a 1 GWdc solar park when combined.

Oneto invested in the projects and partnered with LAE American Energy to develop the 240 MWAC/324 MWDC Misae Solar Park. The park was acquired by Copenhagen Infrastructure Partners on July 2018. It should provide enough energy to power 60,000 houses per year.

Coming next is Misae Solar Park II, a planned 516 MWAC/681 MWDC development. It would be able to supply 129,000 homes with energy. Both projects will interconnect to Tesla Substation 345 KV lines. More information about the projects can be found at the Misae Solar website.

Chinese regulators may ease a major solar power subsidy policy announced just last year. Bloomberg describes the change as “a move which would partially reverse rules that undercut demand in the world’s biggest user and shook the global market.”

According to the China Photovoltaic Industry Association, approvals are once again being considered for “utility-scale, ground-mounted projects that receive subsidies.” The subsidies were cut in June 2018.

Bloomberg notes that while the cuts “aimed at forcing provinces to utilize unused capacity and reduce subsidy bills,” they also had other effects. Most notably: restricting demand and depressing solar material prices worldwide.

China is the world’s largest solar market — but the country is looking beyond the Earth.

Geophysicist Wallace Broecker died on Monday at the age of 87 years old. Broecker is probably best-known for popularizing the term “global warming” through his 1975 paper “Climatic Change: Are We on the Brink of a Pronounced Global Warming?”

A number of major outlets have published obituaries on Broecker, calling him a climate change prophet, a pioneer, or the “Grandfather Of Climate Science,” as NPR did.

A giant of the field, the Columbia University professor did far more than coin a term. Broecker’s life’s work was dedicated to exploring the ocean’s effects on climate change. As his Columbia University page notes, “He was also the first person ever to recognize the Ocean Conveyor Belt (which he named), arguably the most important discovery in the history of oceanography and its critical relation to climate.”

In a 1998 New York Times profile, Broecker said, ”the climate system is an angry beast and we are poking it with sticks.”

Today, over 1 in 50 homes in Scotland have solar PV ☀️

Have you made the move to solar? pic.twitter.com/8CBgTiVyvk