Lightning and Zero gearing up for big debuts

When it comes to US-manufactured electric motorcycles, there are only two names you need to know: Lightning and Zero.

Both California-based companies are well-respected for their contributions to the electric motorcycle industry.

GenZe deserves an honorable mention for their GenZe 2.0 manufactured in Michigan, though as an urban electric scooter, it doesn’t have quite the same pizzazz as Zero’s and Lightning’s models.

So that leaves Zero and Lightning as the twin proverbial cities on a hill and has helped ratchet up the hype for their upcoming electric motorcycle unveilings.

Lightning made waves in the industry last month when they revealed the first details of the upcoming Lightning Strike electric motorcycle.

The Lightning Strike saw heavy demand after the initial announcement of the teaser specs. In fact, demand was so high that Lightning opened early pre-sales for the bike. As Lightning’s VP of Communications Matt Schulwitz described to Electrek:

“Strike has attracted interest from riders of all skill levels ranging from brand new and even soon-to-be riders, to highly experienced lifelong motorcyclists. In addition, while there are many Strike reservation holders who have previously owned an electric motorcycle, the vast majority are reserving Strike to be their first electric motorcycle, something that we find incredibly exciting.”

One of the most common questions Lightning has received is regarding the riding position of the Strike. Lightning also produces the LS-218 electric superbike, which is the world’s fastest electric motorcycle at 218 mph (351 km/h). The LS-218 obviously requires a very aggressive forward-leaning riding stance.

Lightning has now released a new graphic demonstrating the difference in the riding posture between the LS-218 and Strike.

As Matt Schulwitz explained to us:

“Since Lightning‘s initial announcement of the upcoming launch of Strike, one of the top questions from customers has been in regards to rider position. In response to this, we wanted to clearly demonstrate Strike’s rider position relative to the ultra performance focused Lightning LS-218 Superbike. Strike is a motorcycle engineered for the track, but designed for the street.” 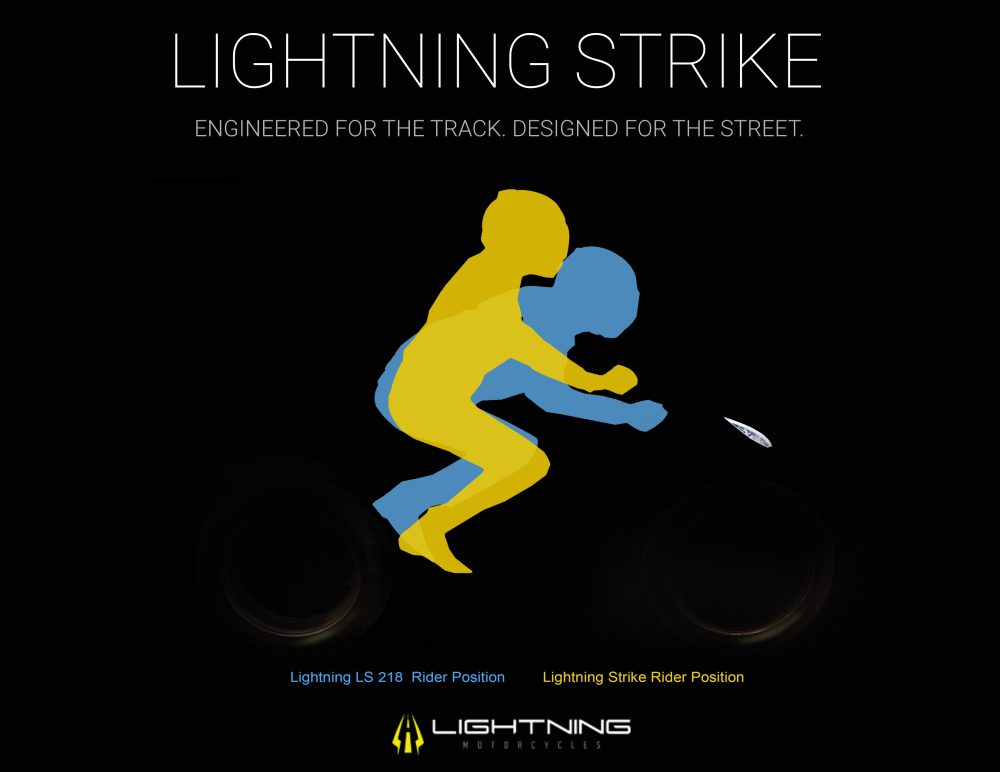 From the graphic we can see that the Strike has a more relaxed and upright riding posture. We’re certainly not talking about anything close to cruiser territory, as the rearward foot pegs retain a sporty forward posture. But as RideApart noted, this could be the perfect compromise between sportbike feel and commuter comfort.

The higher bars on the Strike will certainly be more comfortable for normal highway cruising and city traffic. And while it is a bit hard to tell from the ambiguous yellow and blue riders, the bars definitely appear to be more pronated – another nod to the street.

Zero has revealed fewer details regarding their upcoming Zero SR/F. We don’t have any speed, range, price or charging numbers like we do for the Strike. In fact, so far we have only been graced with a pair of teaser photos which reveal the SR/F as a naked sportbike. Zero also offered up a few sparse words describing the bike.

“More than a new model, the Zero SR/F is an entirely new platform. Zero SR/F combines cutting-edge technology with the most powerful drivetrain Zero has ever produced. The result is the most integrated, premium, and high performance electric motorcycle the company has ever created. The Zero SR/F provides an effortlessly powerful experience in the naked street bike category.”

Despite originally playing their cards closer to the vest, Zero has since revealed a few more details in their most recent video teaser, below.

The video shows us a few new insights. First of all, we see that the bike sports a 14.4 kWh battery pack tucked inside of a what appears to be a redesigned frame. All signs point to the battery being the same pack used in the 2019 Zero SR. In that model, the 14.4 kWh pack provides the SR with 179 miles (288 km) of range in the city or 90 miles (145 km) on the highway.

The second and perhaps more interesting revelation seen in the video is the motor. Its badge reads Z-FORCE 75-10, marking an upgrade from the SR’s current 75-7 motor. 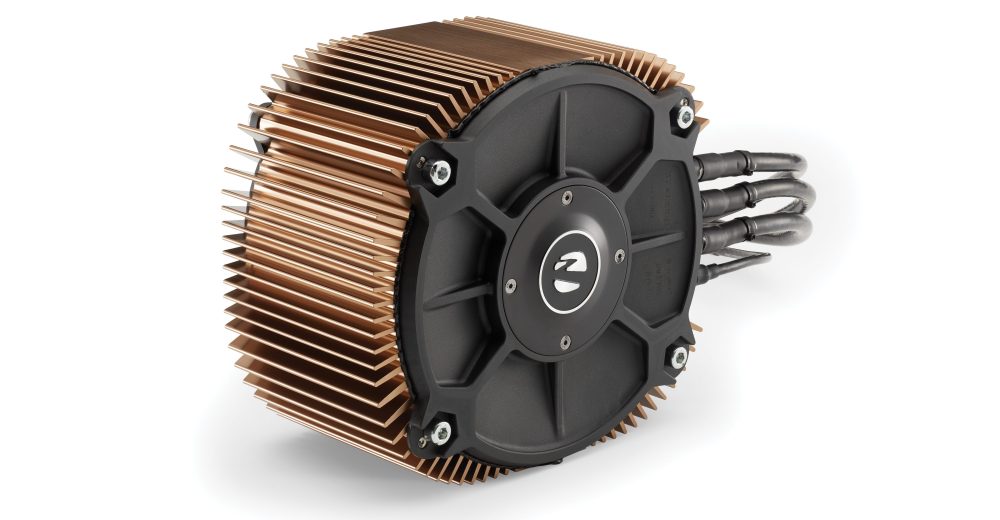 When increasing the width of a motor’s rotor, power can often increase more than linearly because of the geometry of the copper windings in the motor. Power is generated only from the copper that runs parallel to the length of the magnets, meaning loops at the end are effectively wasted potential. Increasing the width of the rotor is thus an effective way to generate increased power more effectively.

Zero has been pitching the SR/F as a new powerhouse of a bike. The upgraded Z-FORCE 75-10 motor confirms that we’re likely looking at the most powerful Zero Motorcycle ever. With the current Z-FORCE 75-7 motor pushing 52 kW (70 hp) in this year’s SR model, you wouldn’t be crazy to speculate that this could be the first 100+ hp model from Zero. Of course that would likely require an entirely new controller – something we haven’t heard a peep about yet from Zero.

The next big question concerns the SR/F’s top speed. We have no data on that front yet, but it better be impressive if it hopes to compete with the Lightning Strike. At 150 mph (241 km/h), the Strike is likely to be the fastest affordable electric motorcycle. Granted, not many people will be able to use that 150 mph top speed often, but the ability to hit higher speeds is important for many highway riders that like the peace of mind in knowing they can accelerate quickly to get out of a sticky situation.

Zero’s new SR/F will be officially launched in less than two weeks. You better believe Electrek will be there on-site to bring you the details first. Lightning’s new Strike isn’t set to launch until March, but we’ll be back with the latest news on that bike as well. Until then, let the duel for the next great electric American sportbike continue!

What do you think about the Zero SR/F and Lightning Strike? Let us know in the comments below!