Electric bicycles are usually quite heavy, though recent design innovations have been pushing the envelope to reduce motor weight. In the past, heavy-duty steel and aluminum frames, dense battery packs and bulky electric motors all helped tip the scales on these hefty metallic steeds.

The best way to get around the heavy e-bike problem is to design the vehicle from the ground up using lightweight materials and components combined with innovative weight-saving structures. And that’s exactly what Prodrive did with the new Hummingbird folding electric bicycle.

Prodrive’s original Hummingbird, a pedal-only bike, began life as a Kickstarter project in 2015 and entered production exactly one year ago today. Weighing in at just 14.8 lbs (6.7 kg), the Hummingbird was a marvel of modern bicycle design.

Upon debut, the bike was claimed to be the lightest traditional folding bicycle in the world thanks to its novel design that saved weight everywhere it could while still maintaining a strong, rigid frame and wheels.

The frame itself is made of carbon fiber, a pricy material famous for its high strength-to-weight ratio. To ensure high quality standards and that weight savings don’t come at the cost of safety, the carbon fiber frames are hand-built by Prodrive in England. The company has extensive carbon fiber experience already, as they also design and build racing components for car companies including Aston Martin, MINI and Volkswagen. 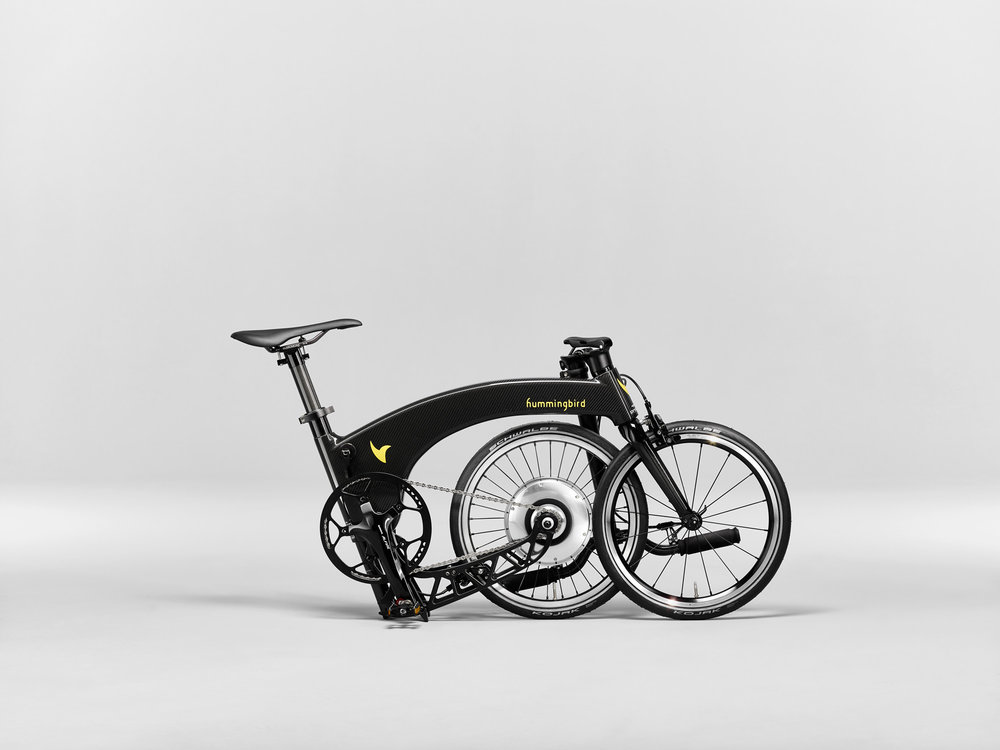 The Hummingbird’s minimalist swingarm is machined from a solid aluminum billet that is anodized for corrosion protection. Computer-aided simulations helped cut the weight of the swingarm in half while maintaining the same total strength.

The seat post is even made of carbon fiber and held in place with titanium hardware, saving every precious gram.

All of this helps create an amazingly strong and lightweight folding bike. So of course the next logical step was to add a motor and batteries.

Now, Prodrive has announced the new Hummingbird electric bike. The e-bike version is 55% heavier than the pedal-only version, but considering the bike only started at 14.8 lbs (6.7 kg), its new 22.7 lb (10.3 kg) weight should still make it the lightest conventional folding electric bicycle in the market. But don’t assume that this featherweight is weak – it’s still rated for a 240 lb (110 kg) rider. 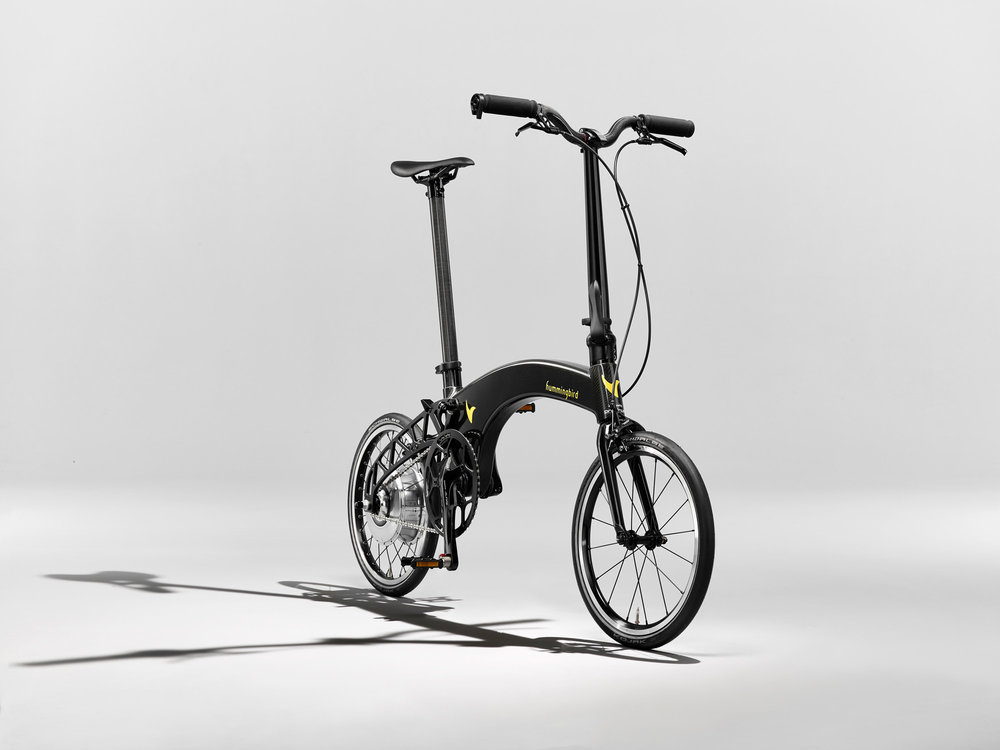 A lightweight 250 W rear hub motor comprises the majority of the added weight, and keeps the e-bike legal for European riders who are limited to that lower power level.

The majority of the remaining additional weight comes from the 158 Wh Li-ion battery which is hidden inside of the Hummingbird’s rear wheel like a miniature version of the famous Copenhagen electric bicycle wheel. 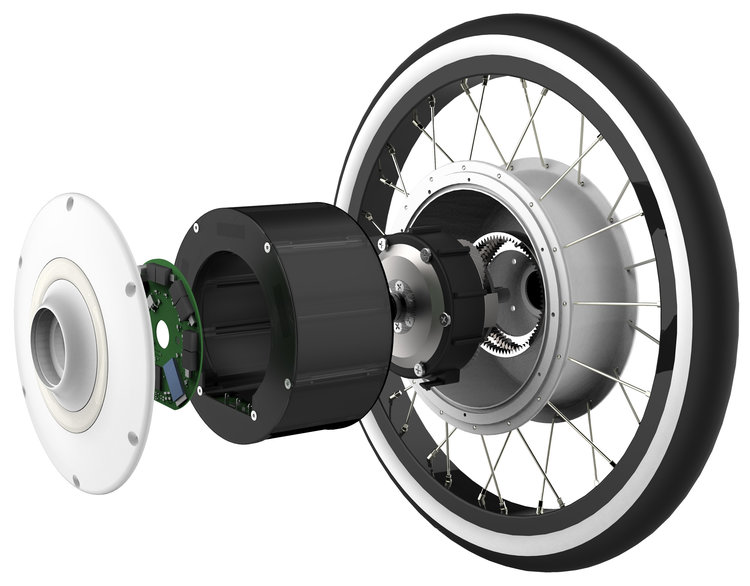 The all in one 250 W integrated electric motor and battery weighs in at only 3.4 kg. This will transform your Hummingbird to an e-bike capable of a 30 km assisted ride and a maximum assisted speed setting of 25 km/h. The charger connects to the rear wheel axle and takes only 3 hours to fully charge, and the regenerating braking function also charges the battery while riding. The built in battery has 3,000 cycles and is replaceable.

This amazing piece of Italian engineering in a single hub has the highest energy / weight ratio on the market and is the perfect pairing for the Hummingbird. 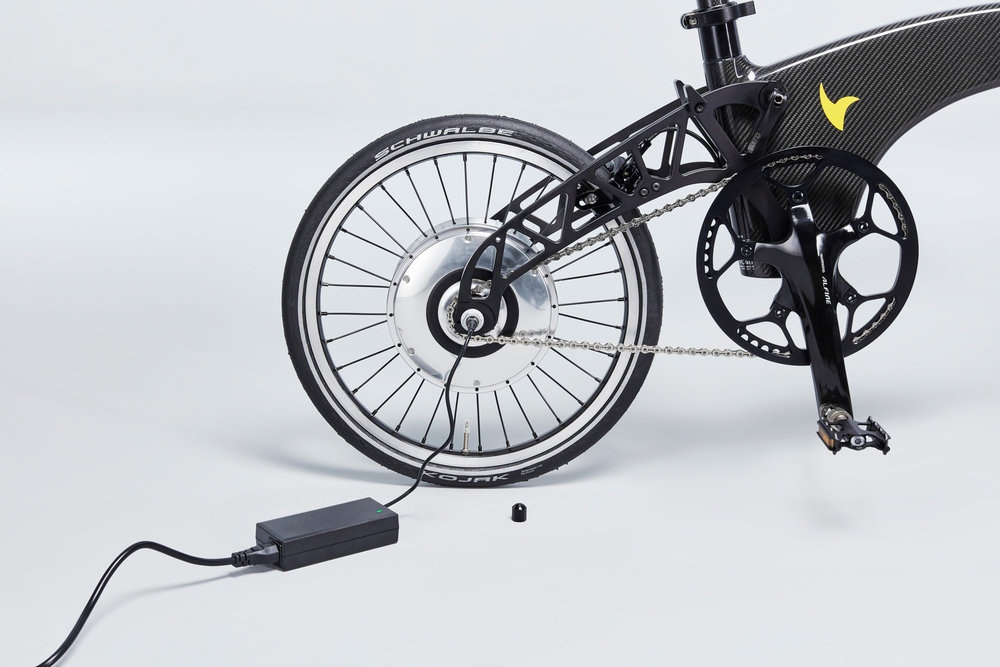 The integrated Bitride app also allows the user to monitor his or her ride data such as speed, distance and battery life as well as to customize the e-bike’s performance settings. 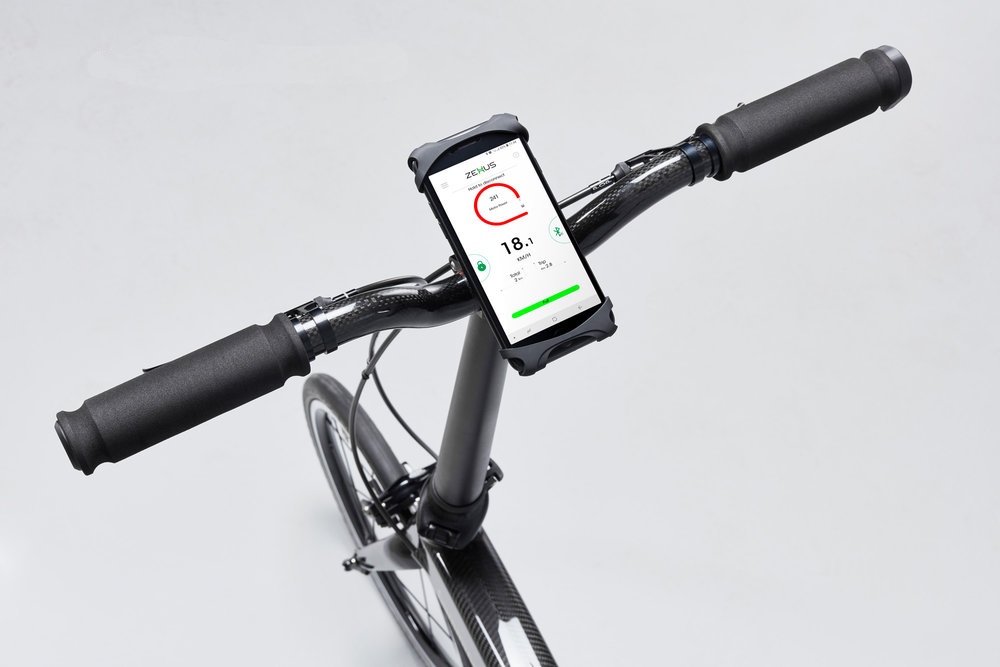 Pre-orders are now open with delivery expected in the next 4-6 weeks. Don’t expect to be hopping on the world’s lightest electric folding bike for cheap though. Prices start at £4,495.00 ($5,967).

The new electric Hummingbird has me torn.

The engineer in me is drooling over that swingarm and the mini battery stuffed around the rear axle. And I love that they went with a direct drive motor which allows regenerative braking, even if it will only add a small amount of efficiency.

On the other hand, placing the battery cells around the heat-generating motor is a great way to increase their temperature, which is just about the worst thing you can do to a Li-ion battery. However, with such a small motor, the heat generated shouldn’t be too worrisome.

Plus, I just like the design of that carbon frame. It’s simple and elegant.

So my idealist side loves this thing. But the pragmatist side of me is putting my wallet back in my pocket.

What gets me is the price. I love innovation in all forms and I understand that handmade specialty bikes like these are absolutely going to cost more than mass-produced imported e-bikes. But if you can accept just 4.5 kg or 10 lbs more in your folding e-bike, you could buy 15 folding e-bikes on Amazon ($389) for the price of one Hummingbird e-bike. Sure the ride won’t be as nice, it won’t look nearly as slick, and it probably won’t last nearly as long, but you’ll have 14 extra e-bikes, which has to count for something. Right?