CES is overwhelming to say the least, but we’ve crowned two products with our “Best of CES 2019” awards for their unique contribution to green transportation. Both are 2-wheeled vehicles but they couldn’t be more different.

One of the biggest game changers in the US vehicle industry today is Harley-Davidson’s transition into a green vehicle company with its “New Roads” program. The venerable US Motorcycle maker has an aging ICE customer base but a plan to re-invent itself with a lineup of more urban electric transportation vehicles that appeal to the younger generation of city dwellers.

At CES 2019, Harley showed off and even let me (dyno) ride on a pre-production Livewire. The big news: Livewire will go on sale in the Fall for just under $30K and include LTE and an app developed with Panasonic, whose booth they shared. The app will show how fast the motorcycle is charging among other features and it will be the first motorcycle with built in LTE.

In addition, Harley will allow CCS combo DC charging, although the 40 minute to 80% charging feels a little slow for DC and won’t really make traveling as seamless as gasoline, especially with its 110 mile estimated urban riding range. The Livewire will charge on level 1 and 2 J1772, but only at level 1 speeds because the onboard charger can’t be as big as the ones in cars.

Harley also showed off two seperate concept vehicles that both captured the imagination. One was a lower speed city bike in the Super 73 form factor that still exudes Harley’s design language, and another was a light off road electric bike that just screamed fun.

We’re also bestowing Swagtron with our “Best of CES award” for their unbelievable assortment of electric bikes, skateboards  and scooters … and whatever you call this thing.  The best of this group for me is the Swagcycle 2.0 (bottom right in the picture below) which is a fantastic last mile commuter vehicle that in my book is a lot more fun and useful than the Bird/Lime/etc kick scooters currently littering most major metropolitan areas. At around the price of a high end scooter, this pedal electric bike with a soft, adjustable rear suspension has safety lighting for night travel and a very capable 300W motor (upgraded from 250W). This vehicle is more like Swag’s EB-1 than the original pedal-less Swagcycle but has the pedals that help you get started or up hills. I take my kids to their bus stop every morning on an EB-1 (even in NY winters) and it really makes the quarter mile trip back a lot less time consuming.

Swagtron is a game-changer for us not only because they’ve got a huge product line of electric vehicles — admittedly often sourced from Chinese OEMs — but they are also extremely aggressive on pricing and they go deep into brick and mortar, which in turn, puts electric transportation into more people’s hands. They also have operations and some assembly in the South Bend IN, which is nice.

Best of the rest of CES:

We were brought to CES this year by Nissan and their 62kW hour LEAF was certainly my highlight of the week. I will admit however that during the LEAF interviews, I could not avert my eyes from the iMX concept with its wrap around display (not unlike Byton which was also showing off new concepts at CES). What I heard from Nissan is that the iMX is actually going to be produced and should be announced by the end of the year, it is “more exciting and good looking form factor”.

In fact, iMX isn’t a car, it’s a platform and according to Nissan, several form factors of electric vehicles will be coming down the pike based on iMX. 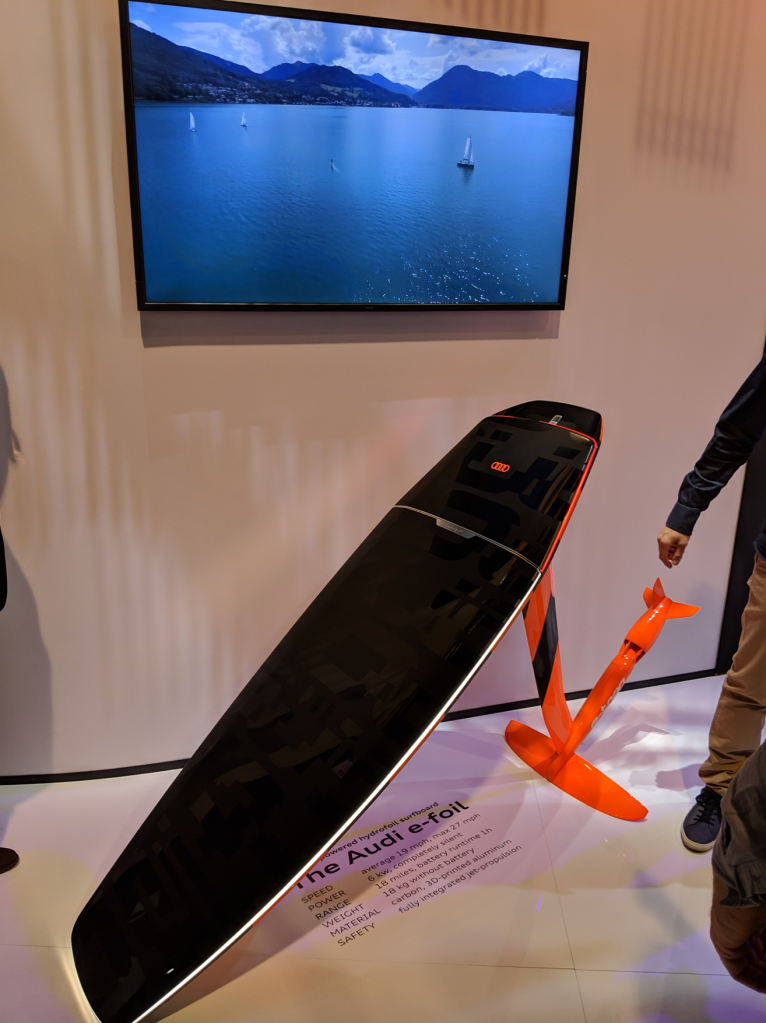 Audi didn’t have anything new to announce UNLESS YOU COUNT THIS HYDROFOIL SURFBOARD sitting lovingly outside of its booth. Or the new Model Y competitor they announced across the pond in the Netherlands.

Across the way however, Bell Helicopter showed off a 10 passenger VTOL Hybrid Drone Helicopter with over 100kWh of battery bundled with a diesel generator. 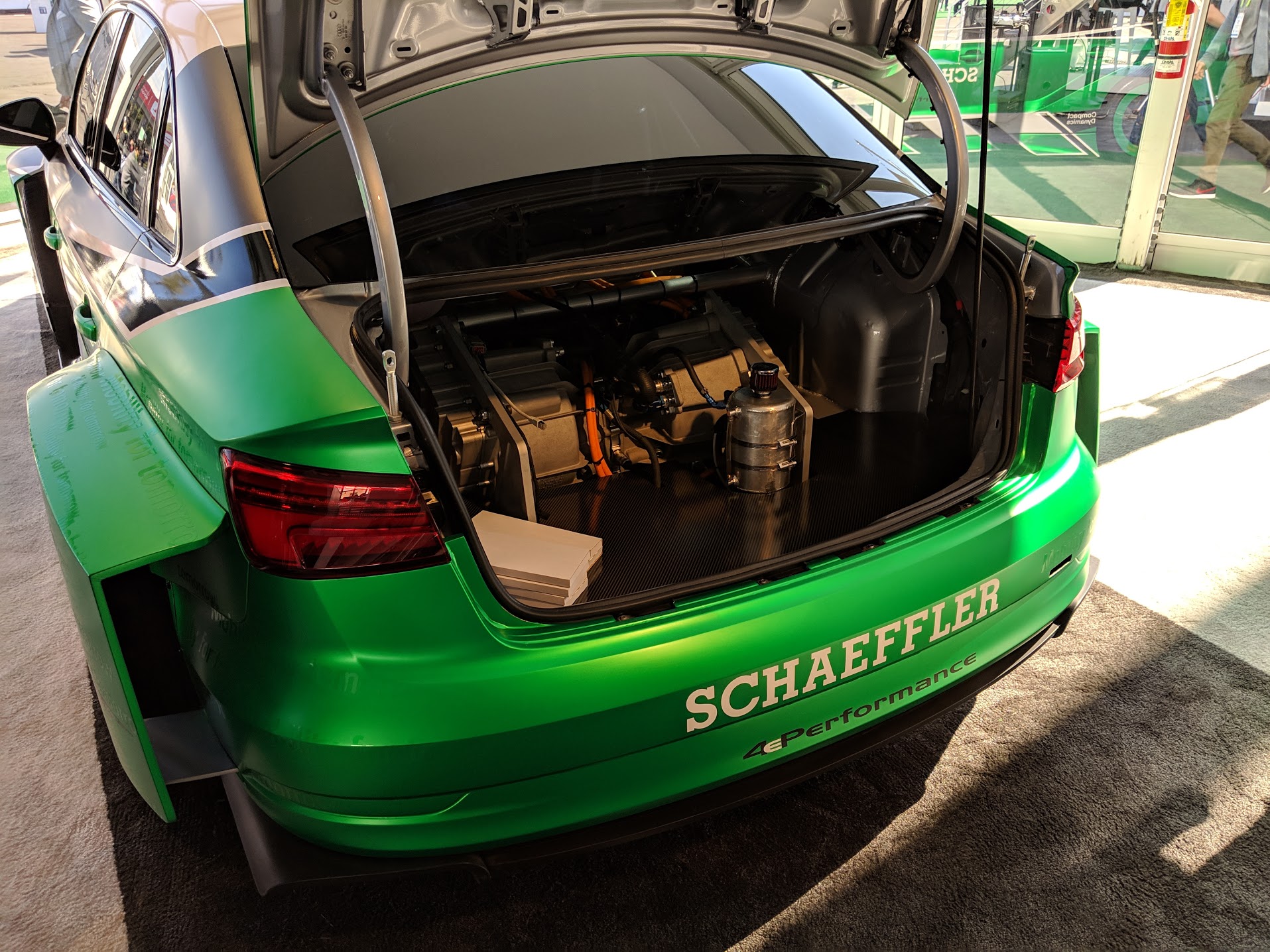 If I were to be able to take any vehicle out of CES, it might be Shaeffler’s prototype Audi EV built out of FOUR previous-gen Formula E engines (valued at $80K/ea) for a total of 880kW or about 1200hp.

This is the vehicle that does perfect doughnuts (all 4 wheels move independently), tank turns and has drifting controlled by a computer so smooth your grandma could drive it.

Specs given by Special Projects Director Benedikt Locker claim 0-130mph (200kph) in 6.5 seconds. That’s Roadster-land folks. Locker estimated that with the right aerodynamics and gearing, this vehicle could hit 300mph or “somewhere between 400-500kph”. Schaffler also showed off a cargo ebike/carrier platform they called a bio-hybrid because of the meat energy delivered through pedals.

These are bike lane legal in the EU because they are only 80cm wide and Locker says they are working hard to get these to the US but are running into regulatory speedbumps. 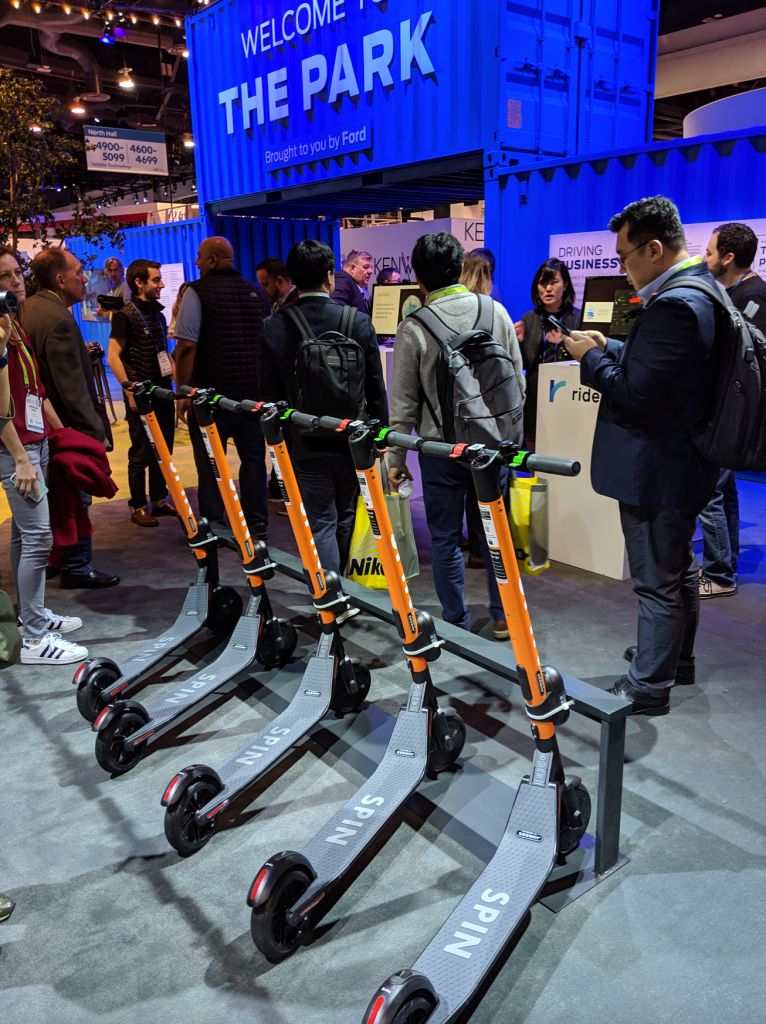 Ford showed off their drive into scooters and other Smart City initiatives including its C-V2X (cellular vehicle-to-everything) communications.

Honda showed off their WIRELESS Vehicle to grid idea which would allow the car to wirelessly send a charge to the grid. Honda’s EV projects were delayed however to 2020, unless you consider the Clarity.

Honda also showed off some autonomous ATV-ish hauling vehicles that are ICE-only for now but are planned, like everything else, to go EV.

Mercedes showed off their EQC400 Prototype which we’ve seen a number of times already, but this time they offered us a test drive at a time TBD. Stay tuned.

That’s all for now! See you next year CES.