Nissan LEAF Plus is a speedy 214HP hatchback w/226 mile range, hits US in Spring

Nissan’s new 62kWh LEAF powertrain was announced today at CES 2019 in Las Vegas and we are on hand to get all of the details.

The new LEAF is now entering a more crowded EV market than when the LEAF debuted almost a decade ago, but Nissan’s long pedigree with EV buyers will certainly help it win customers. But is this the EV that Nissan should have created a long time ago?

We’ve long known that Nissan was planning a 60+kWh version of its LEAF, but today at CES we’re getting all of the specifics you are after. Nissan invited us out to CES with flight and hotel to check out their newest EV and interview some of the people who created it.

Here are the goods from the spec department:

While the EU pricing is set at under 40K€, US pricing isn’t yet set.

These new speedier LEAFs will go on sale in Japan starting in a few weeks and will reach the US shores in Spring. The vehicle will hit EU this summer. Marketing of the vehicles gets a little confusing, so I’ll just let Nissan do the talking here:

The LEAF e+ will be sold under the LEAF PLUS Series in the US and Canada, with each trim level receiving its own designation of S PLUS, SV PLUS and SL PLUS. Globally, the vehicle will be referred to as the Nissan LEAF e+. 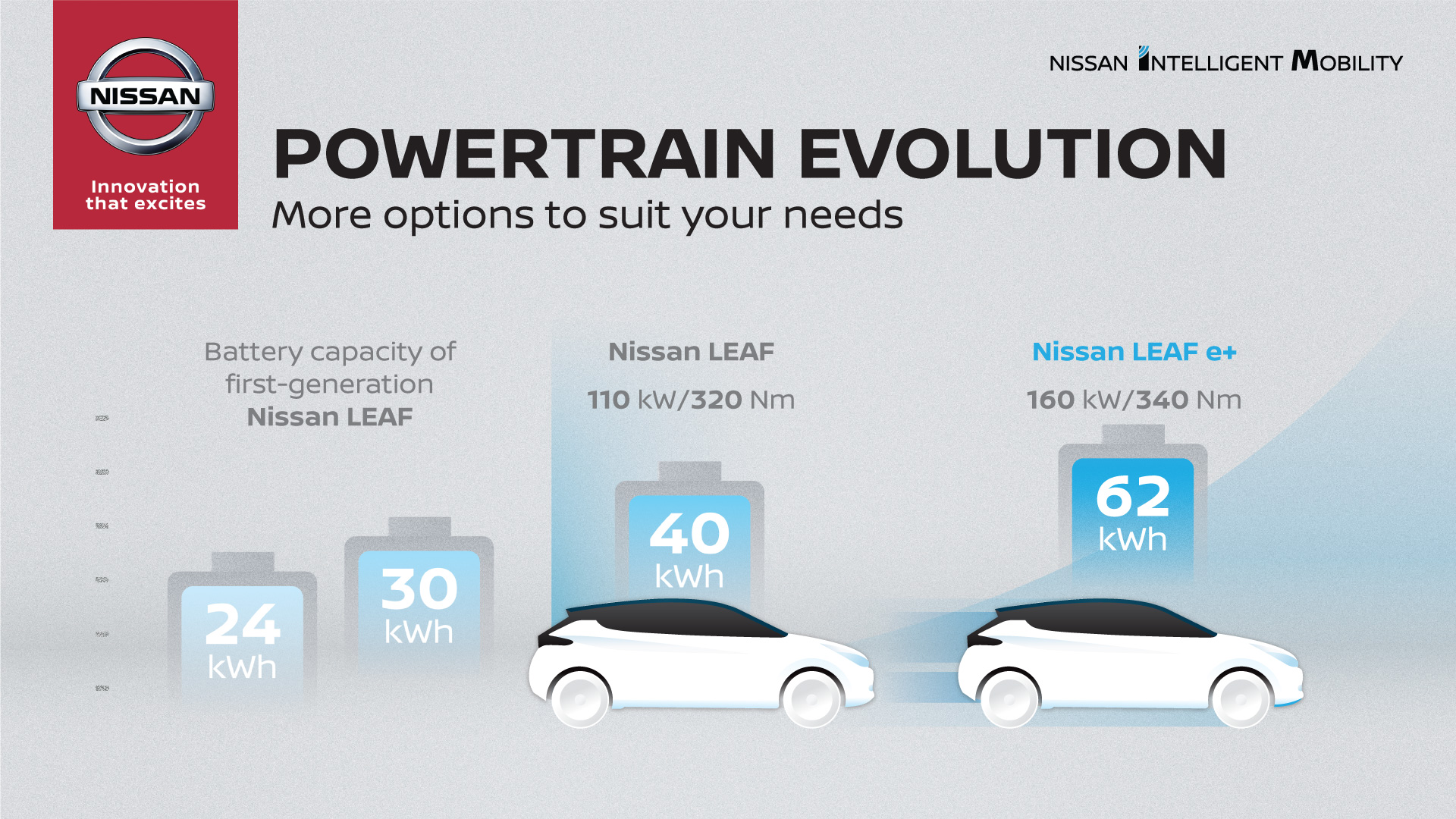 The new powertrain adds not only 160kW speed but about 40% more range with only a minuscule (5mm) amount of additional space taken up. Nissan is using the same AESC cells but has them packed tighter. I had a chance to talk to Kazuhiro Doi, Nissan’s Alliance Global Director of Research about the new battery pack. Some details:

Ivan Espinosa Nissan’s VP of Global Product Strategy and Product Planning told me that some other updates include OTA updates to the center stack. That means no longer will you need to go to a dealer to get updates to things like maps and services. Espinosa also alluded to the fact that Nissan is going to have some big new EV launches, including Nissan’s iMX concept that we again saw on the show floor.

Although the new LEAF has tough price/specs competition in the Chevy Bolt and Hyundai/Kia Kona/Niro in the US, it does extremely well in Japan and the EU.

The LEAF is one of, if not the best selling EV in heavy EU nations like Norway. With the relatively long history of the the vehicle and the brand in these big markets, Nissan hopes to capitalize on its established brand and footprint to outsell newcomers.

In the US, Nissan still has a few quarters of the $7,500 tax incentive, which should give it a pricing advantage over GM and Tesla in the short term. 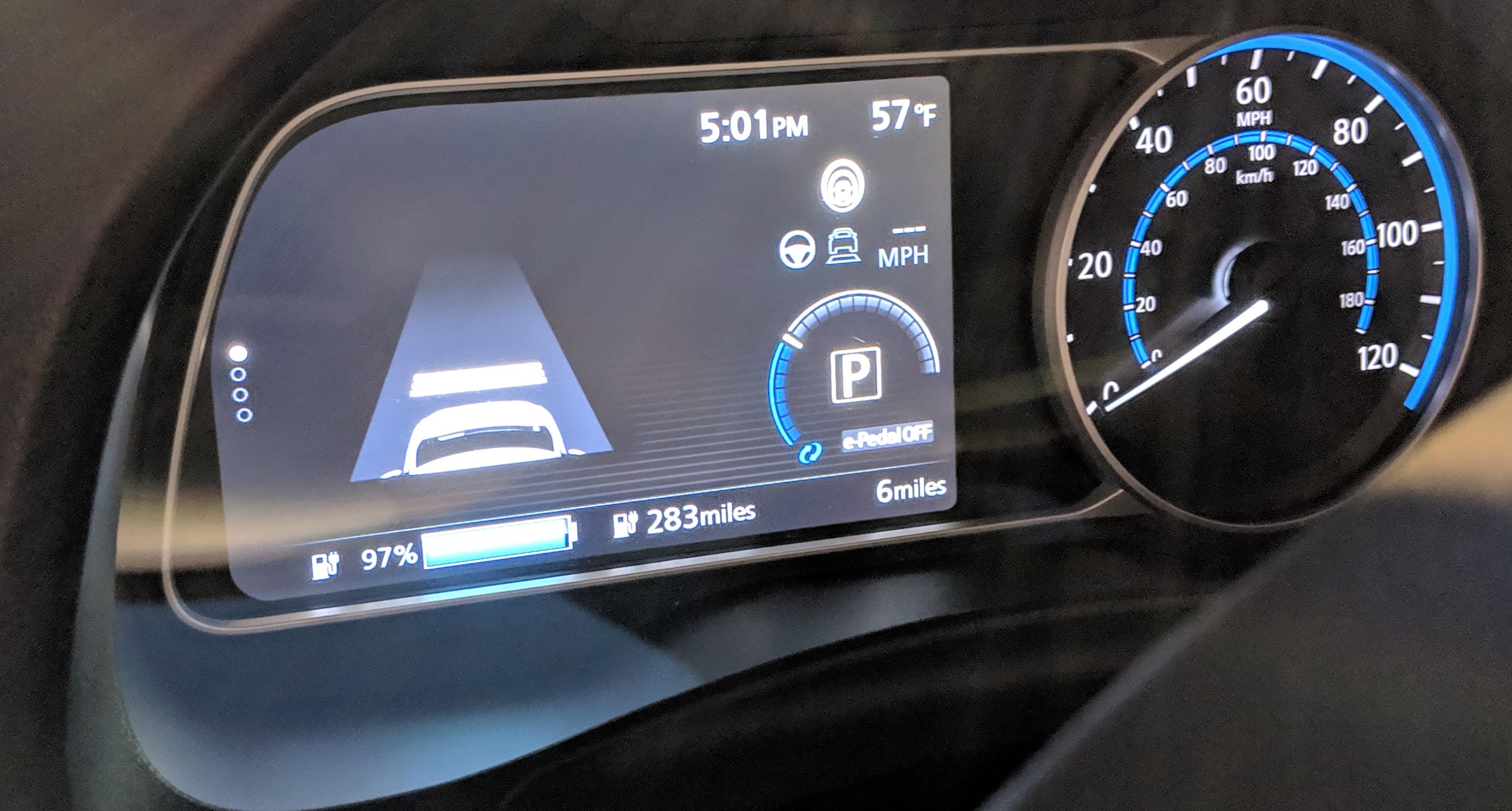 First of all, it was very nice of Nissan to invite us out to the show and put us up for CES 2019. I don’t think there is another mainstream automaker that genuinely wants to sell EVs more than Nissan – even as its former chairman and EV advocate Carlos Ghosn was removed from the company.

In the US, the 62kWh Leaf Plus models will face stiff competition from the established but smaller Chevy Bolt and the extremely constrained Hyundai Kona. Both of these vehicles are solid but seem to be constrained by their manufacturers for ZEV status rather than being equal status cars. Nissan will be marketing these new LEAFs as well as the 40kWh versions just like any other car, if not moreso. I love this.

Nissan will sell these across the country in its established dealer network. These dealers have been selling electric cars for a decade so they are versed in EVs a lot more than Hyundai/Kia and since they actually want to sell the vehicle, the buying experience will be a lot better than you’d get at a Chevy or BMW dealer, by and large.

Playing a leading role in Nissan Intelligent Driving is ProPILOT Assist, an in-lane semi-autonomous driving technology that can automatically adjust the distance to the vehicle ahead, using a speed preset by the driver (between about 18 mph and 62 mph). ProPILOT Assist can also help the driver steer and keep the vehicle centered in its lane. If the car in front stops, ProPILOT Assist can automatically apply the brakes to bring the vehicle to a full halt if necessary. After coming to a full stop, the vehicle can remain in place even if the driver’s foot is off the brake. If traffic restarts, the car will resume driving when the driver touches the steering wheel-mounted ProPILOT Assist switch again or lightly presses the accelerator to activate the system. All these functions can reduce stress when driving on the highway in both heavy and fast-moving traffic.

Some concerns do arise however. I would have liked to see Nissan acknowledge the battery degradation issue more and was hoping to hear about active cooling/heating of the battery. Talking to the head of research about this, he seemed to not be concerned at all, but I’m still a little wary. The 8 years/160,000 km battery warranty helps. I would have also liked to have learned a little more about this car since I came all this way. I don’t yet have a price or a 0-60 on a car that touts its speed and power over previous models and the competition.

Also, Nissan is about the last hope for CHAdeMO fast charging standard in the US in what I consider to be a lost battle. Even Electrify America is only putting out 1 50kW CHAdeMO charger on its charging stations, so it will become harder and harder to find a place to fast charge in the US, let alone at its advertised 70-100kW top speed. Nissan deferred when pressed on this, but I hope to see a CCS-CHAdeMO adapter one day.

There’s also the Tesla factor in terms of EVs. The base Model 3, while significantly more expensive, also has a significant power advantage – 283 hp (211 kW) vs 215hp (160kW) for the LEAF Plus. The LEAF being a larger hatchback, more capacity and different styling will mostly appeal to a different type of consumer obviously.

The other thing to consider is Nissan Energy‘s car to grid technology which we previewed last month but isn’t yet available to consumers. Theoretically the amount of money you make from demand charge reverse charging could more than pay your energy costs.

To conclude, I love what Nissan is doing here. The LEAF e+ or PLUS is a compelling automobile for the masses that I wish Nissan had built a long time ago.