In what appears to be an act of protest against Tesla, a bunch of pickup truck drivers used their trucks to block access to a Supercharger station and reportedly yelled profanities about Tesla until they were removed from the premises.

A Tesla owner and Reddit user Leicina stopped to charge at the local Supercharger station located next to a Sheetz, but all the stalls were blocked by 3 large pickup trucks.

This is not exactly uncommon and it is referred to in EV community as ‘Icing’ a charging station – when ICE (internal combustion engine) vehicles are occupying a space for an EV.

Most often than not, it’s a mistake from the driver or someone who simply doesn’t care, but the situation in Hickory appeared to be different: 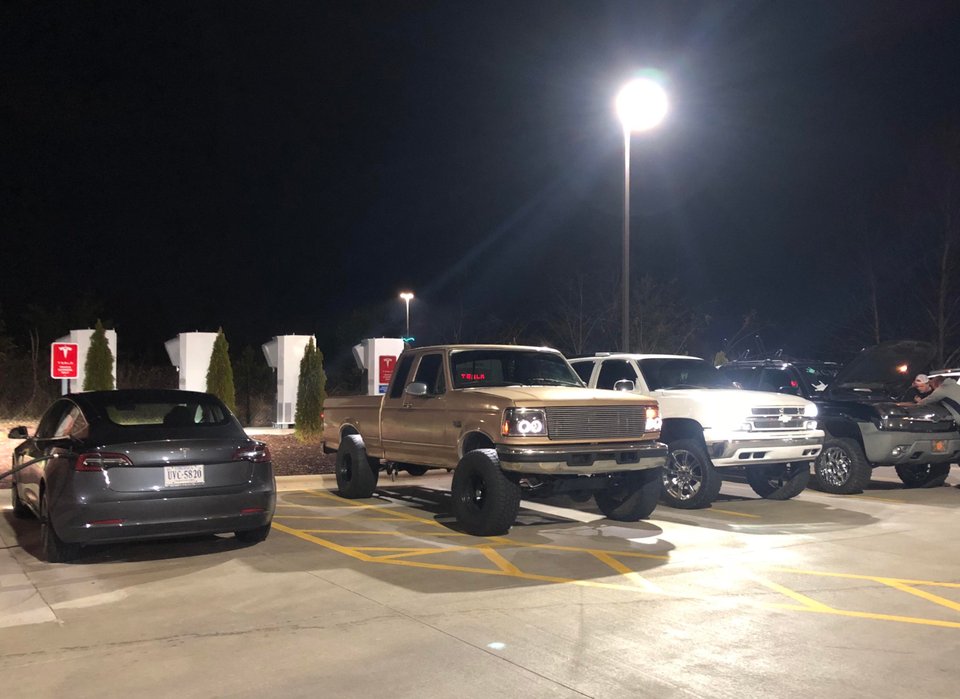 It was certainly not a mistake and the pickup truck drivers actually appeared to be targeting Tesla in protest.

Leicina wrote about the incident:

“I’ve never had a supercharging experience like this one. These trucks blocked all the chargers, chanted “F” Tesla, and were kicked out by a Sheetz employee.”

An employee from Sheetz, who is in charge of the parking lot, ended making them leave at the request of the Tesla owner.

Leicina said that it “took them 10 minutes or so and one of them did that ‘I’m going to hit you’ maneuver after circling the parking lot.”

ICEd charging stations are certainly nothing new, but this is a particularly extreme case of it.

99% of my interactions with strangers related to my Tesla vehicles have been positive and I think that has mostly been the case for other owners so I wouldn’t want anyone to think that this is normal, but it’s still worrying.

I guess it also depends on where you live.

This is scary. I’ve been coal-rolled in my Tesla by several trucks in NC, the drivers were hostile. If you don’t know what it is google “Stephen Colbert Coal Rolling.” One day these conflicts will end very badly. @Tesla @hickorypd @StephenAtHome @cleanairNC @cleanenergyorg @CMPD https://t.co/Gd6S6SOhNB

It’s hard to imagine the reasoning behind doing something like that or hating Tesla in general.

Even if you love gas-guzzling trucks, that doesn’t mean you should hate Tesla. I don’t know if something like this has ever happened to another car brand at some point.

I know that some American were insulting and shaming people who drove foreign vehicles back in the day, but I don’t know if it ever got to that point.

Speaking of that, what some of these morons forget sometimes is that Tesla is actually an American brand, creating a lot of American jobs.

I feel that the reason they hate Tesla is probably due to years of listening to the media back when they were attacking Tesla for taking subsidies from the government.

Of course, if there was any good logic behind their thinking they would go against pickup truck making brands like GM and Chrysler who not only took subsidies from the government but also took bailout money from them.

Somehow, I don’t see that happening.