There are very simple things that drivers should do and often learn in driving classes that would help alleviate traffic but some people often lose the habit of doing them, like moving out of the passing lane when appropriate.

Now Tesla Autopilot’s latest feature, Navigate on Autopilot, actually suggests you move out of the left lane when it makes sense.

Two of the biggest things drivers could do to alleviate traffic are keeping a more reasonable following distance with the car in front and staying out of the passing lane when you are not passing.

Now Tesla’s Autopilot is able to do both of those things with the new Navigate on Autopilot.

The feature was released with Tesla’s version 9 software update.

It’s a first step toward enabling on-ramp to off-ramp driving on the highway with the system doing all its own lane changes based on speed and the destination entered in the navigation system.

As we reported earlier this year, Tesla started releasing the feature in its 2018.42 software update, but it doesn’t automatically perform the lane changes. Navigate on Autopilot suggests the lane changes and the drivers need to initiate them with the blinker stall.

The automaker explained the change in a blog post when releasing the feature to the wider fleet:

“While initially the feature will require drivers to confirm lane changes using the turn stalk before the car moves into an adjacent lane, future versions of Navigate on Autopilot will allow customers to waive the confirmation requirement if they choose to. In both of these scenarios, until truly driverless cars are validated and approved by regulators, drivers are responsible for and must remain in control of their car at all times”

Now those lane changes are not just about getting to your destination but they also involved some driving best practice like moving out of the passing lane.

Some owners with the latest Autopilot software update have been sharing images of the system suggesting lane changes “out of the passing lane” (picture by u/ahatzz11 on Reddit): 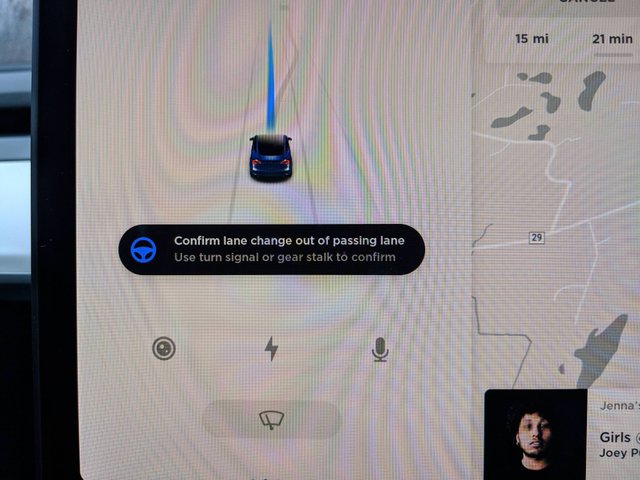 Tesla CEO Elon Musk, who has been personally testing a cutting-edge version of Autopilot in his own Model S, recently said that the feature will soon be able to do the lane changes on its own without the driver having to confirm them.

Since the main feature of the current version of Navigate on Autopilot is to automatically suggest lane changes, it’s nice to see Tesla adding best practice moves like this.

When combined with a reasonable following distance that can be adjusted with Tesla’s traffic-aware cruise control, you have two great features that would have a good impact on the flow of traffic if everyone was doing the same thing.

Unfortunately, that’s not happening anything soon, but it gives us a glimpse at how autonomous driving systems could help with traffic.