Tesla Semi black prototype comes back, charges from 5 Superchargers at once

Ever since the launch of the Tesla Semi a year ago, we have usually only seen the same silver electric truck prototype, but now Tesla’s black semi prototype is back and it was spotted charging from 5 Superchargers at once.

The former has been publicly seen over the last year as part of the Tesla Semi development program, but we haven’t seen the black prototype since Tesla Semi was setting out on its first cargo trip with battery packs from Gigafactory 1 to the Fremont factory.

Tesla said that carrying cargo between its two factories would be the first use of the Tesla Semi trucks and Musk referred to the automaker’s logistic costs to carry cargo between the two locations as “gigantic”.

Eight months later, the black prototype is back on the road, but it’s not between the Fremont factory and Gigafactory 1.

The Tesla Semi was spotted at the Kettleman City Supercharger station between Los Angeles and the Bay Area.

Assemi said that he saw the Tesla Semi charging from 5 Supercharger stalls at once.

Though this is the first time that we’ve heard about 5 charging stations at the same time.

Earlier this year, Elon Musk said that a Tesla Semi prototype made it ‘across the country alone’ with only the Supercharger network and an extension cord system.

That was the silver Tesla Semi prototype, but now the matte black prototype is also back in the mix.

Before being spotted on the road this week, the prototype was also spotted at Tesla’s headquarters last week (pictures by Chris Kopchick): 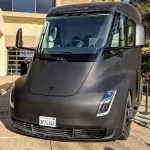 It looks like it’s now being tested on public roads as part of the Tesla Semi development program.

But after a year in development, Musk said that he expects that the production version could be even more efficient with a range closer to 600 miles.

More details are expected to come next year when Tesla aims to start production.