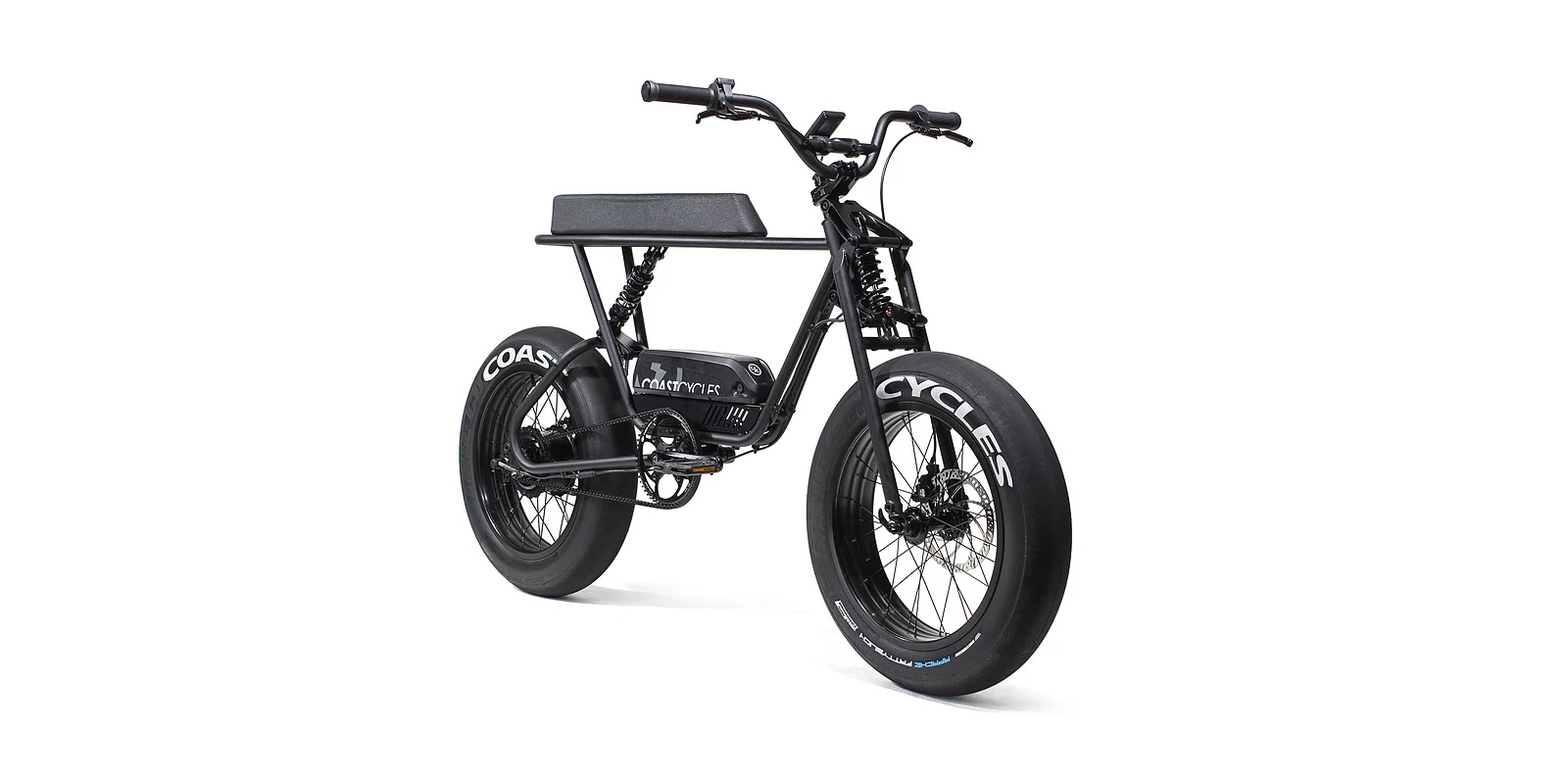 Coast Cycles has just unveiled the newest addition to their electric bicycle lineup, the new Buzzraw X series. Available in both a 250W and 750W version, these mini-bike inspired electric bicycles have some impressive redesigns.

If the Buzzraw X electric bicycles look familiar to you, it’s probably because you’ve seen the design before.

Multiple companies have come out with similar looking electric bicycles in recent years. The frame design is inspired by mini-bike style motorbikes such as the Honda Ruckus.

One of the most famous is the Super 73, which ran a massively popular Kickstarter and launched this frame to fame.

Since then, other e-bikes such as the Juiced Scramblers have also released e-bikes based on similar designs.

Countless others have popped up since all over the world, proving that the design has been popular with consumers. However, most people don’t know where the craze started. In fact, it can all be traced back right here to Coast Cycle’s original Buzzraw, which actually started life as Coast Cycles’ Ruckus bike. The Singapore-based company quickly changed the name to Buzzraw, probably fearing Honda’s lawyers.

But out of all of the Buzzraw styled e-bikes out there, there has never been one with full suspension. 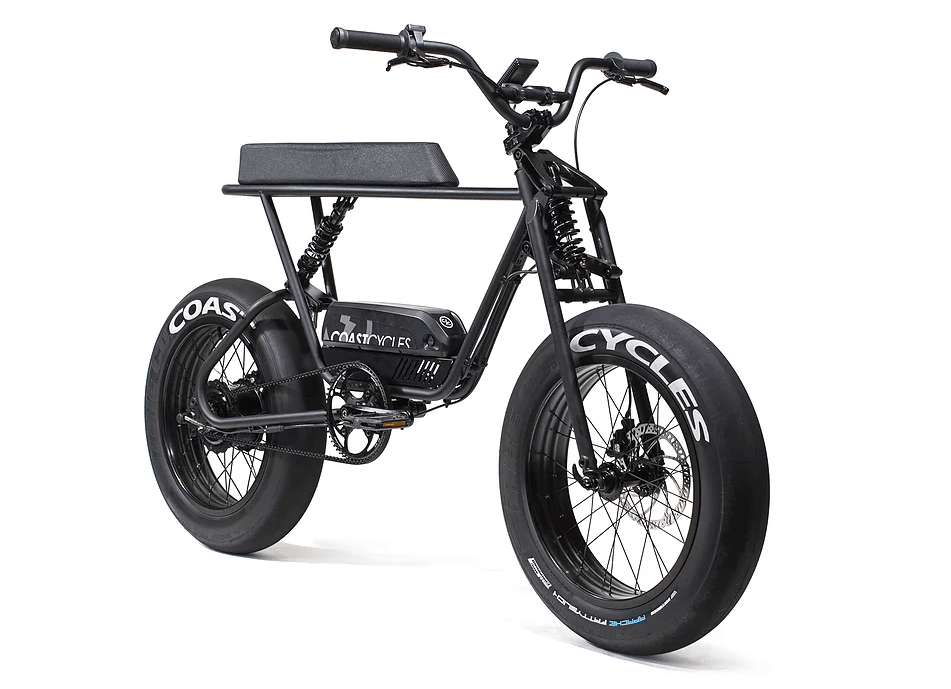 The Buzzraw X line is available in two versions, the Buzzraw X750 and Buzzraw X250. As you might have guessed, the former is the 750W version while the latter clocks in at 250W.

Unlike all previous Buzzraw-styled electric bicycles, the Buzzraw X features a rear swing arm with a central spring suspension.

The fork is also a novel design. Unlike standard springer forks, the Buzzraw X features an innovative girder fork with parallel wishbone suspension. Both the front and rear suspension features 80 mm (3.15 inches) of travel.

The seat is a long, tapering bench-style saddle common to this genre of e-bike. The design allows the same size frame to fit multiple sized riders. While it’s not quite the same as having a fully adjustable frame, e-bikes don’t require the same precision fitment due to their electric assist. When you’re using the bike like a motorcycle, you just kind of sit wherever is comfortable.

Belt drive enthusiasts will be happy to see that the Buzzraw X supports a belt drive option. Belt drives allow for maintenance free and whisper quiet operation, though they usually result in a price premium for electric bicycles. 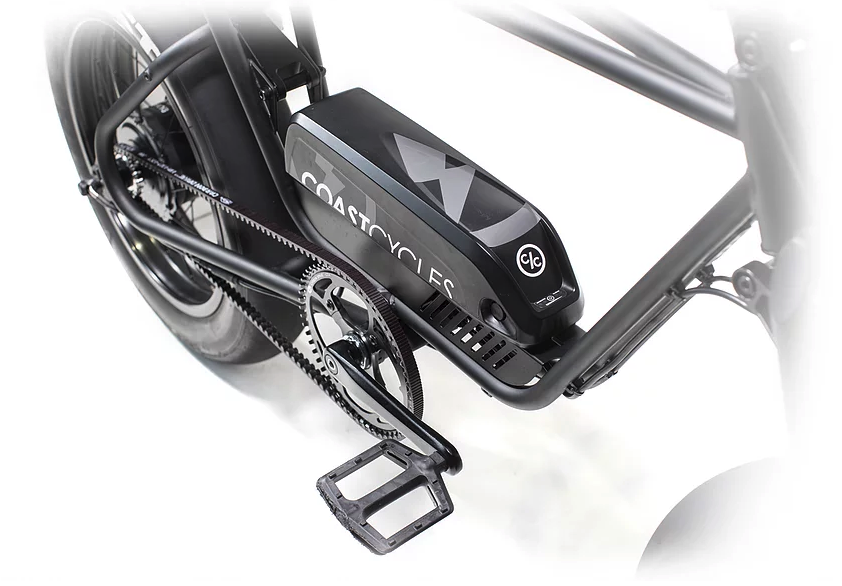 Power comes from a 48V battery on the Buzzraw X750 version, though exact capacity details aren’t yet available. Charging time is rated at 5 hours.

The Bafang motor includes a handlebar mounted display that allows a rider to monitor their speed, battery, distance and other parameters. Riders can also select between multiple pedal assist modes.

Speaking of that Bafang motor, Coast Cycles says the Buzzraw X will support both hub motors and mid drive options.

Between the 4″ fat tires, full suspension and the powerful 750W motor option with the Buzzraw X750, this e-bike should roll over just about any obstacle. While I’d love to give you more specifics about pricing and exact options/availability, Coast Cycles isn’t quite ready to release that info. But you can already contact the company about getting in line when they open up pre-orders.

What do you think about the Buzzraw X electric bicycle lineup? Let us know in the comments below.