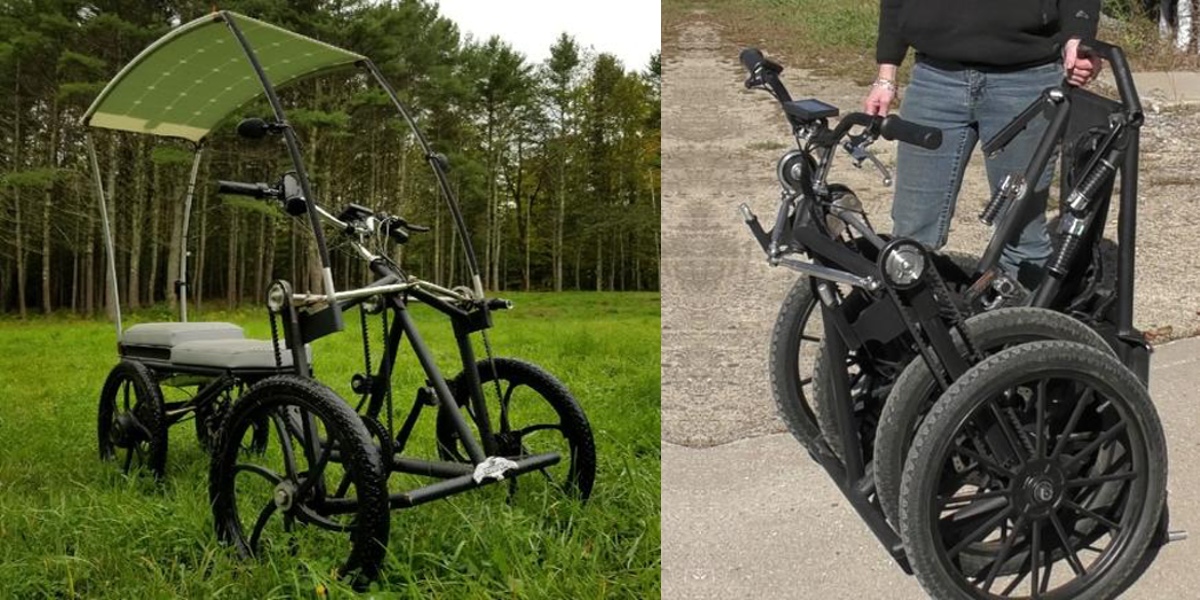 Electric bicycles are great, combining a lightweight vehicle with near-effortless propulsion. But sometimes you just want to sit back and relax a bit more. That’s when an electric pedal car might be right for you.

You’d be forgiven if you’ve never heard of Yarmouth, Maine, population 8,500. Besides the yearly Yarmouth Clam Festival, not a lot comes out of the quiet city. Except for the Screecher, that is.

The Screecher is an electric pedal car or quadricycle. It has four wheels and pedals, making it visually similar to a bicycle surrey you might rent on vacation.

But unlike most quadricycles, this one is electric. And solar powered. And affordable, at just $2,500.

Two 350W motors work in tandem to provide 700W of continuous electric assist (adjustable to 5 levels), and 1,000W of peak power during acceleration and hill climbing.

In fact, the Screecher electric pedal car can work in electric-only mode, meaning you don’t have to pedal at all. Just twist the throttle and drive it like a normal car. “Normal” being relative.

If you only want to pedal, that’s an option too. A belt drive connects the front wheels to the user-supplied pedal power. And there’s cruise control if you’d like a constant level of assist.

That electrical power is provided by a 48V 12.8Ah lithium-ion battery. With just over 600 Wh of capacity, the Screecher electric pedal car has an electric-only range of up to 20 miles (32 km).

The Screecher’s top electric speed is 15 mph, though the rider could presumably add some additional pedal power to go even faster.

The acceleration isn’t going to force your head back, with a 0-15 mph (25 km/h) time of 5 seconds. However, that’s still better than a lot of cheap e-bikes.

According to Leslie Gillert, President and Head of Engineering at Screecher:

“Our goal was to solve a particular problem: The lack of affordable, electric-powered, carbon-neutral transportation. We did not set out to build an expensive and over-engineered product, available to only a few. Our design is elegant, functional, and simple, which offers greater stability, comfort, and easier maintenance.”

The Screecher sports seating for two, or one person with room for cargo. It can also be used for towing, so you could drag your kayak down the trail and to the river, parking right by the bank.

The Screecher even folds down to roughly half its size. So you could potentially put your pedal car in the back of your regular car, or more likely SUV. At 120 lbs (54v kg) though, you might want to have a friend help you lift it. Good thing there’s seating for two!

In addition to Level 1 charging (i.e. plugging the Screecher’s removable battery into a wall outlet in your home), the Screecher also includes a roof-mounted solar panel. Actually, I wouldn’t call it so much “roof-mounted” as “roof-replacing”. The solar panel is the roof.

The solar panel is rated for 100 W, and Screecher says it can recharge the 600 Wh battery in 4 hours.

However, I’m not sure that math checks out. While I’m not the leading expert, I know a thing or two about small solar projects. By my calculations, in good sunlight you should get be able to add about 50% charge to your pack with those specs. So Screecher’s numbers seem a bit optimistic there. But I could see getting a full charge in one full day of good sunlight.

It will certainly charge faster than the roof mounted solar panels on a conventional car.

In addition to solar and wall charging, there’s a third way to recharge the battery as well: regenerative braking.

Admittedly, the Screecher is rather bare bones when it comes to accoutrements, compared to both the ELF and PEBL. But if all you need is a simple electric pedal car that works, the Screecher has it for you in an affordable package. 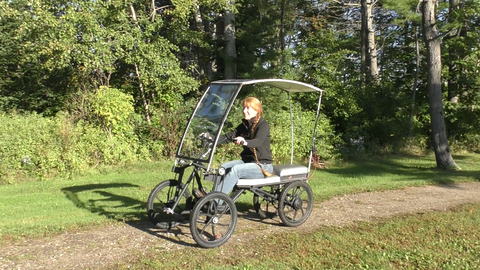 According to Screecher CEO David Eshelman:

“I see a significant market for Screecher in the growing market for recreation and last-mile electric transportation here in North America and the hyper-growth economies of Asia. Products that are similar to Screecher are often unobtainable and impractical for most potential buyers. At a price point of $2500, Screecher is set to be a major market disruptor.”

The Screecher is already available for pre-order on the company’s website. Production is expected to begin next month in December, 2018.

I like the design. There’s nothing super fancy about it, but that’s part of the charm. And part of what makes it affordable.

You could always add a nicer seat, side panels, fancy light package, etc. But at $2,500 for a sweet little electric pedal car, I can dig it.

While you aren’t going to make any friends by riding this in the bike lane, it would still fit. However, I see it being better suited for either trail riding or small communities. It’d be a great way to get to the golf course or clubhouse.

The belt drive is definitely a nice touch, and it makes me wonder how they can keep the price this low. Of course it doesn’t appear to be a fancy Gates belt drive, which may help with the reasonable pricing.

It should be noted that the Screecher isn’t actually in production yet. Since this is technically a pre-order situation, the idea of caveat emptor (buyer beware) still applies. It’s not quite the same as a Kickstarter or Indiegogo since you’re at least dealing directly with the company, but you’re still buying something that doesn’t yet exist.

My other main question is how does this fit into traffic laws in many places? You’ll need to check your local regulations, as sometimes the limit for something to be considered a bicycle ends when a fourth wheel is added. However, it might qualify as an NEV or LEV in some places.

The company provides this on their website. Hopefully your local law enforcement officers are as friendly:

“The Screecher is essentially a 4-wheel e-bike that fits in a bike lane. E-bikes are not required to be registered or require a drivers license in most countries. Regulations will vary in different countries, states, and cities. Our designers and testers ride Screechers all over their home city, including past friendly police officers, who simply wave or give us a thumbs up.”

We’re hoping to get our hands on a Screecher soon to test out in the flesh, and we’ll definitely report back on what we think.

In the meantime, what do you think? Let us know in the comments below.