While we are waiting for Tesla to ramp up its solar roof tiles, the company is starting to use more of its own solar modules.

A new report shows that Tesla Energy is now mainly using its own ‘Tesla-branded’ solar panels made by Panasonic at Gigafactory 2 in Buffalo.

Before SolarCity was bought by Tesla, the company was already working on its own solar panel technology, but it was only installing solar modules from a variety of suppliers.

After the acquisition, Tesla CEO Elon Musk pushed for a product differentiation in solar products.

The solar roof tiles are the most talked about but they also pushed to have their own solar panels.

In 2017, they unveiled the new ‘sleek and low-profile’ exclusive all-black solar panel made by Panasonic.

Tesla made a deal with Panasonic to produce the panels at Gigafactory 2, which they inherited from the acquisition of SolarCity, in Buffalo, New York.

The ramp up was slow, but we have now learned that Tesla successfully ramped up installations using its own panels as 68% of total installs in California during the month of July, 2018, according to the most recent data compiled by ROTH Capital from the California Distributed Generation Statistics (CDGS) and associated contributors – via PV Tech. 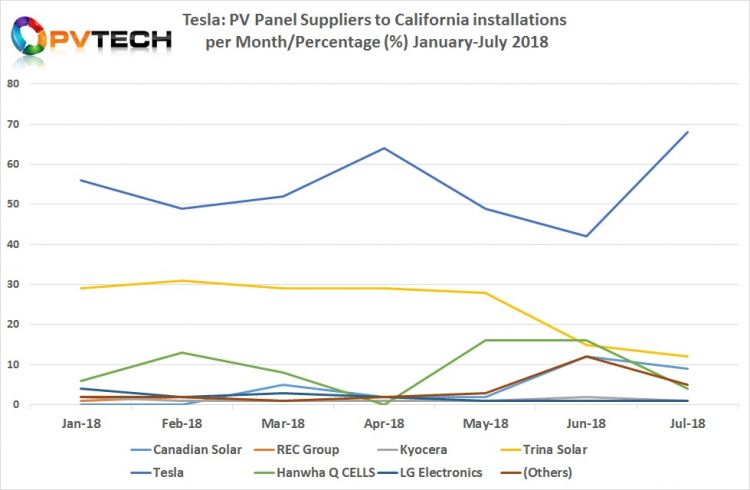 As you can see, Tesla is now buying fewer panels from other manufacturers and focusing on its own Tesla-branded panels.

With its third-quarter financial results, Tesla reported that it installed 93 MW of solar capacity during the last quarter.

It was their best quarter of the year and Musk was happy with it:

“We saw higher revenues and significantly better profitability in our energy business, in fact, I think for solar it made them the best quarter ever for solar.”

While residential solar rooftop retrofits are up, Musk also said that Tesla Solar Roof volume production is delayed to next year.