Nio is ramping up its electric vehicle infrastructure effort in China and it is building battery swap stations.

The startup even built one right next to a Tesla Supercharger – creating a little glimpse into the future.

With only a handful of EV startups actually delivering vehicles, Nio is emerging as one of the most serious EV startups.

Now they want to support their growing fleet with electric vehicle infrastructure.

China already has some massive public charging station plans, but Nio wants to also have its own services.

They have deployed things like mobile charging stations inside electric vans and they also want to have battery swap stations.

Several companies tried and failed at battery swapping. Tesla had a battery swap system that they seemingly abandoned.

NIO has a very similar battery swap system, which they claim can autonomously replace a battery pack on the ES8 in about 3 minutes.

They want to deploy 1,100 battery swapping stations by 2020 and one of the first ones is going up right next to a Tesla Supercharger station (picture by JayinShanghai on Reddit): 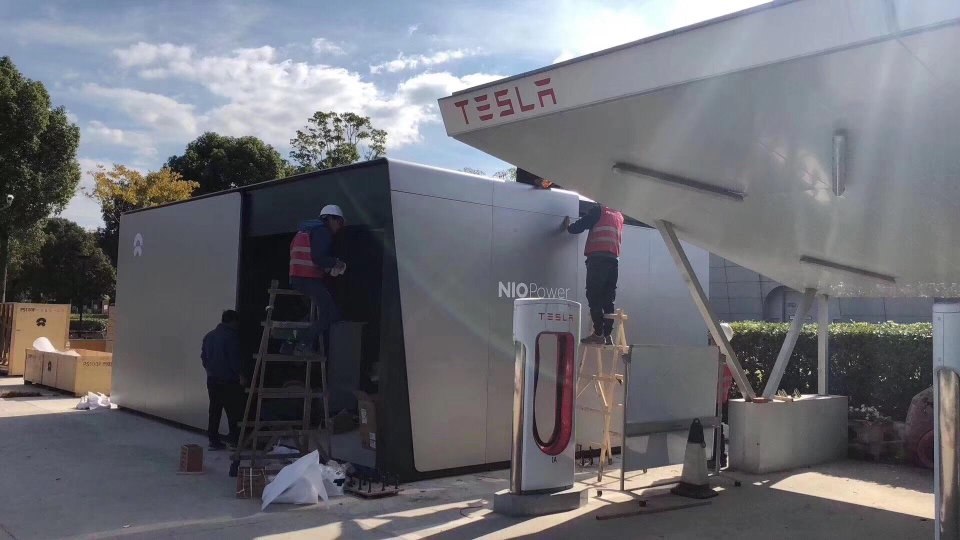 This is a little glimpse of the future. You have an EV fast-charging station next to a battery swap station.

Nio is often called “the Tesla of China” and it looks like they are embracing it with this and they also opened their first electric car service center right next to a Tesla service center.

Now there are some pretty good reasons why battery swapping hasn’t worked with EVs before – mainly that the battery pack is a very valuable part of your vehicle and you don’t want to be swapping it.

But Nio is trying to combine it with a battery renting structure, similar to Renault’s ZOE battery scheme, which lowers the upfront price of the vehicle to RMB 275,400 (~$42,000 USD).

That way, you don’t own your battery pack, which makes it a lot easier to swap it. The battery renting costs RMB 1,280 (~$200 USD) per month, but it also gives owner access to a battery swap system to get increased range more quickly.

I think it has a lot better chance of working than previous efforts, but I am still not 100% convinced. It will be interesting to see how this turns out for Nio.