The Tesla next-generation Roadster prototype only had a few public outings since its unveiling a year ago.

This weekend it made one of those rare public appearances at the Art Center to inspire young car designers.

The Art Center College of Design has produced many successful car designers over the years, including Tesla Chief Designer Franz von Holzhausen.

Several other Tesla designers have also come from the college, like Senior Designer WooTak Kim, Senior Manager of Design Andrew Kim, Design Manager Bernard Lee, and many others.

Now they are looking to inspire students with their own latest design: the next-generation Tesla Roadster.

They brought the red prototype at the school this weekend for a “car classic” event. Here are a few pictures that emerged on social media (pictures from Instagram via shincollection143, dom_schulz, zolinator, xaviercarrdesign,and abc7davekunz): 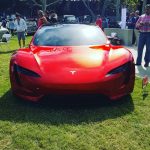 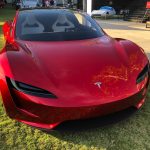 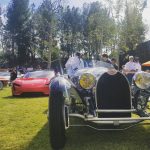 Last month, the new Tesla Roadster made its car show debut at the Grand Basel car show, but they were only displaying a design shell.

This red one is the only known working prototype and it made a few appearances since the unveiling.

As we previously reported, CEO Elon Musk claimed a list of insanely impressive specs for the new Roadster, including 0-60 mph in 1.9 sec, 620-mile of range, and more.

But Musk has been teasing those specs as the “base specs” and other versions could be even crazier.

For example, the CEO says that they will offer a ‘SpaceX package’ that will include cold air thrusters.

During Tesla’s third quarter conference call, Musk said that they “made progress” on the new Roadster.