Liesbeth and Edwin ter Velde are preparing to drive the Solar Voyager, an electric buggy powered entirely by solar power, all the way to the South Pole.

Here’s how they plan to do it.

The project, known as Clean2Antarctica, is part of the Dutch couple’s support for a zero waste lifestyle.

The duo created a goal to take plastic waste and do something extraordinary with it. The idea they eventually landed on was to use plastic waste to build a solar powered electric vehicle capable of driving them to the South Pole.

Sure, there are electric snowmobiles out there already, but for a project this unique, the team needed to think outside the box.

To build the Solar Voyager out of plastic waste, the couple designed a new hexagonal building block known as a HexCore using recycled materials. They began small with their own plastic trash. 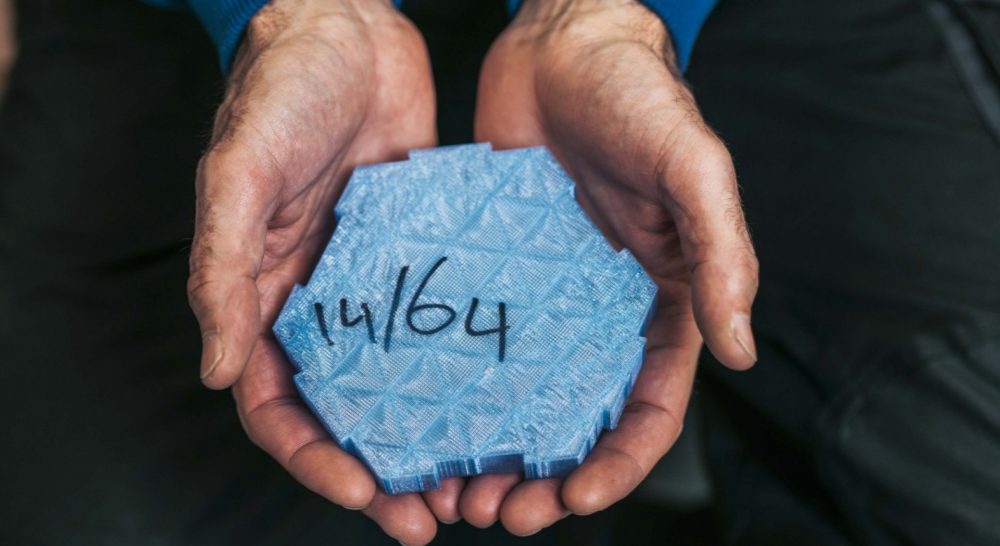 According to the team:

“We shredded pieces and melted it into the filament that feeds 3D printers. Then we took it to the next level and did it on industrial scale, using recycled pellets from a waste plant. With forty 3D printers we printed 4000 HexCores. A building block inspired by the honeycomb, designed to be light and strong.”

Those building blocks were then combined to form the structure of their electric vehicle. 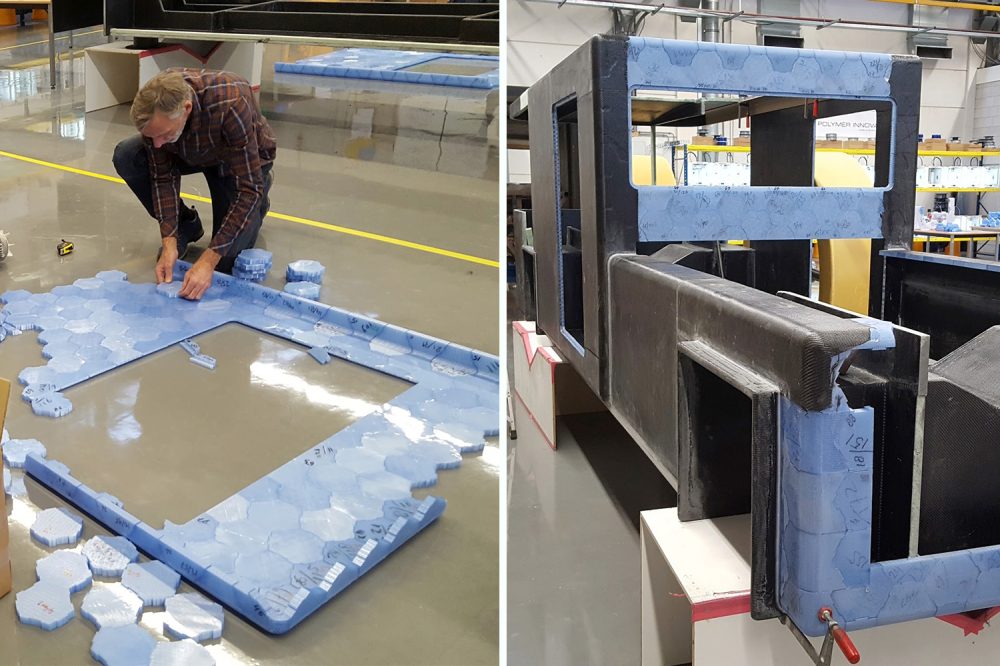 Once the shell of the Solar Voyager was created, the remainder of the tech was completed.

The Solar Voyager ultimately consists of a four-wheeled buggy towing a pair of two-wheeled trailers.

The trailers supports 10 bifacial solar panels and also store supplies, including 47 days worth of food.

The team isn’t lugging along heavy water though. Instead, they’ll use the ice around them for drinking water. The ice will be melted in six solar vacuum tubes.

Infrared windows are also installed in the cab, which help to absorb sunlight and keep the cab warm. 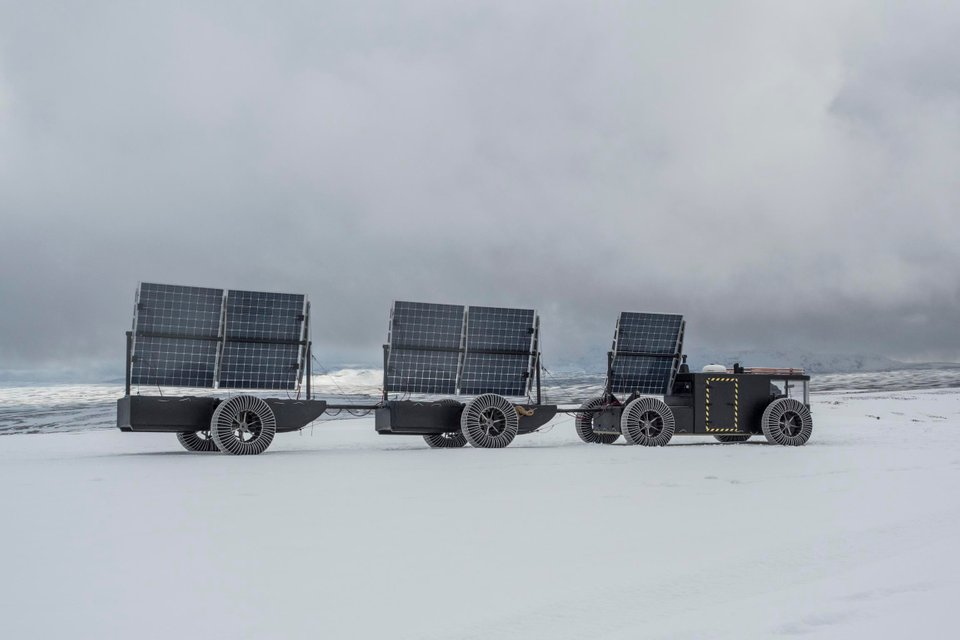 The Solar Voyager also measures 16 m (52 ft) long and moves along at a blistering 8 km/h (5 mph). That slow speed maximizes efficiency of the power generated by the solar panels. 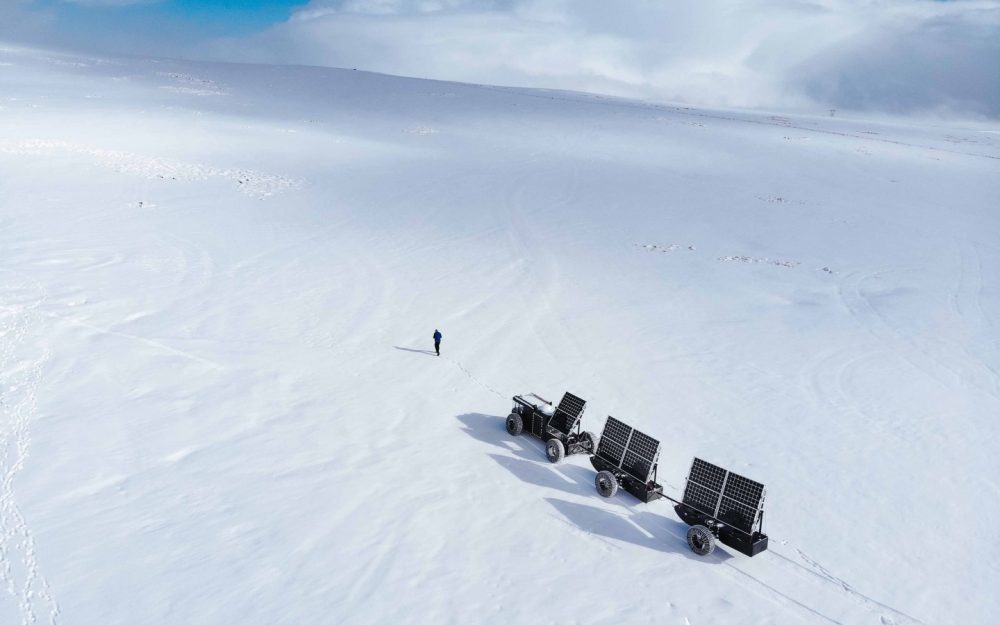 The design was of course not without a number of technical challenges, as explained by the team:

“Driving on Antarctica needs creative thinking. How do we float on top of the snow or provide drinking water? How can we communicate with the Mission Control Center? Ten solar panels provide constant power for the engine, and vacuum pipes can melt the ice. Its light weight is spread across special wheels to make driving more efficient. The Solar Voyager started as a plastic puzzle and is now a high-tech vehicle built for Antarctica.”

The team ultimately worked out all the kinks in the Solar Voyager, helped by a shakedown run in Iceland.

The journey of the Solar Voyager

In five weeks, the team will set out from their Antartica base camp and drive to the South Pole. From there, they’ll head straight back, completing a journey of 2,400 km (1,491 mi). If all goes according to plan, the journey should last around 30 days.

Along the way they’ll endure summer temperatures of -30ºC (-22ºF) and 24-hour sunlight, though that last part is probably a good thing.

If you’re asking “But why Antartica?”, then you’re not alone. Solar races occur in the US, Europe and Asia all the time. But Antartica has a special significance for the team’s mission.

“Antarctica contains 90% of the world’s ice and belongs to no one. It is zero waste by law, making it the perfect destination for a zero waste adventure. We can learn from Antarctica and make sure it stays that way. We also want to raise awareness for the Antarctic treaty. If not extended in 2048, the continent will be opened for commercial exploitation.”

You can follow along with the Solar Voyager’s progress on their blog.

And if you have been bitten by the solar bug but aren’t prepared to tackle Antarctica, then perhaps you can start smaller with your own solar powered bike car instead!