VW unveils MEB platform for electric vehicles, launches ‘Electric for all’ campaign to have ‘affordable’ EVs

VW unveiled its MEB electric platform this week and it is launching a new effort called ‘Electric for all’, which represents the brand’s goal to deploy millions of “attractive models at affordable prices on the road.”

The modular electric drive matrix (MEB) is VW’s next-generation electric platform on which the production versions of its “I.D.” concept electric vehicles are based on.

There’s the I.D., which is a Golf-sized vehicle is expected to be their first mass-market EV for the model year 2020. VW also unveiled the I.D. VIZZION sedan, the crossover all-electric I.D. CROZZ Concept, and then there’s the I.D. BUZZ electric microbus coming in 2022.

For the first time this week, VW is unveiling the rolling chassis without the bodywork and interior – “exactly as it will be used in series models.”

Here are a few images of the new MEB electric platform:

VW currently sells the e-Golf, but the vehicle is converted from its gas-powered platform, which results in a handful of compromises.

Christian Senger, Head of the E-mobility Product Line, says that the MEB, as a dedicated electric platform, will make it possible to install larger batteries:

“The ID. will be a milestone in technological development. It will be the first fully connected electric car with full everyday utility that millions of people will be able to afford. The car holds the road really well thanks to the flat battery in the floorpan and the space inside is much more generous – we are making substantial headway with the sense of spaciousness.”

VW is going with the skateboard-like design with the battery pack sitting on the floor between the two axles. 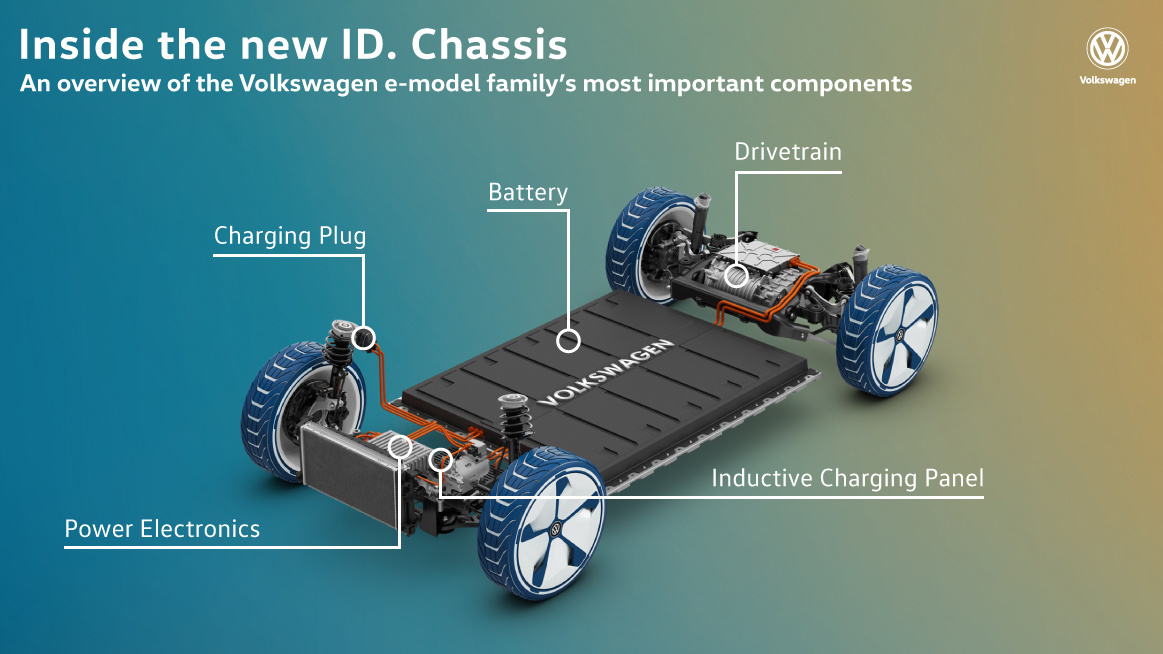 The automaker says that the platform will enable their vision of ‘Electric for all’ to bring more affordable EVs to market.

“We will make electric vehicles popular and get as many people as possible excited about electric cars. The MEB is one of the most important projects in the history of Volkswagen – a technological milestone, similar to the transition from the Beetle to the Golf.”

As we previously reported, VW will start with a capacity of 100,000 electric cars per year for first plant to go electric in Germany by 2020.