The vehicle, called I.D. CROZZ, is the latest member of the series of I.D. concepts for VW’s next generation all-electric vehicles using the German automaker’s Modular Electric Drive Matrix (MEB).

The I.D. CROZZ actually looks like a less refine version of Audi’s own concept, but the latter is actually slated for production in 2019 while VW’s all-electric crossover has no production timeline.

With this said, VW is expected to bring its I.D. concepts to market gradually, starting in 2020 with its compact vehicle – positioned in the same segment as VW’s Golf.

The latest addition in the series is significantly bigger and offers the same interior space as the all-new 2018 Tiguan. It has a full length of 182.1 in on a 109.2-in wheelbase.

Here are a few images of the prototype they unveiled at the Shanghai Auto Show today:

At first glance, it’s clear that Audi’s Sportback is closer to a production version than this concept from VW.

The battery pack has a capacity of 83 kWh and VW claims it will enable the same range of  “over 500 kilometers (310.7 miles)” as the Audi concept, which has a 95 kWh pack. Though as we mentioned with Audi’s, they are talking about NEDC rating for electric vehicle range and therefore, we expect real-world range or the EPA estimate to be closer to ~275 miles.

They released renders of the platform:

VW says that the vehicle will feature autonomous driving technology – just like the other I.D. concepts.

The interior was designed with self-driving in mind:

“The steering wheel is an illuminated sensory surface with which the driver can switch from manual to fully automated (‘I.D. Pilot’) mode. This is done by touching the VW logo for three seconds. The steering wheel then retracts into a flush position within the dashpad. The traditional round shape is changed to a wheel with six rounded corners, creating a high-tech steering wheel. Integrated into the bottom section is an ‘island’ with illuminated capacitive fields that control things like: the ‘P’, ‘R’, ‘N’ and ‘D’ gears; turn signals; phone calls; playlists; and volume for the sound system.”

A few pictures of the interior:

They have also included a head-up display concept. VW explains in a press release:

“The driver receives all data relevant to driving, such as speed and visual navigation instructions, via the head-up display. Directions, for instance, are projected as virtual images 23 to 49 feet ahead of the car. The effect is astonishingly realistic: direction arrows are projected via augmented reality to show exactly where the driver is heading and become part of the driver’s three-dimensional surroundings.” 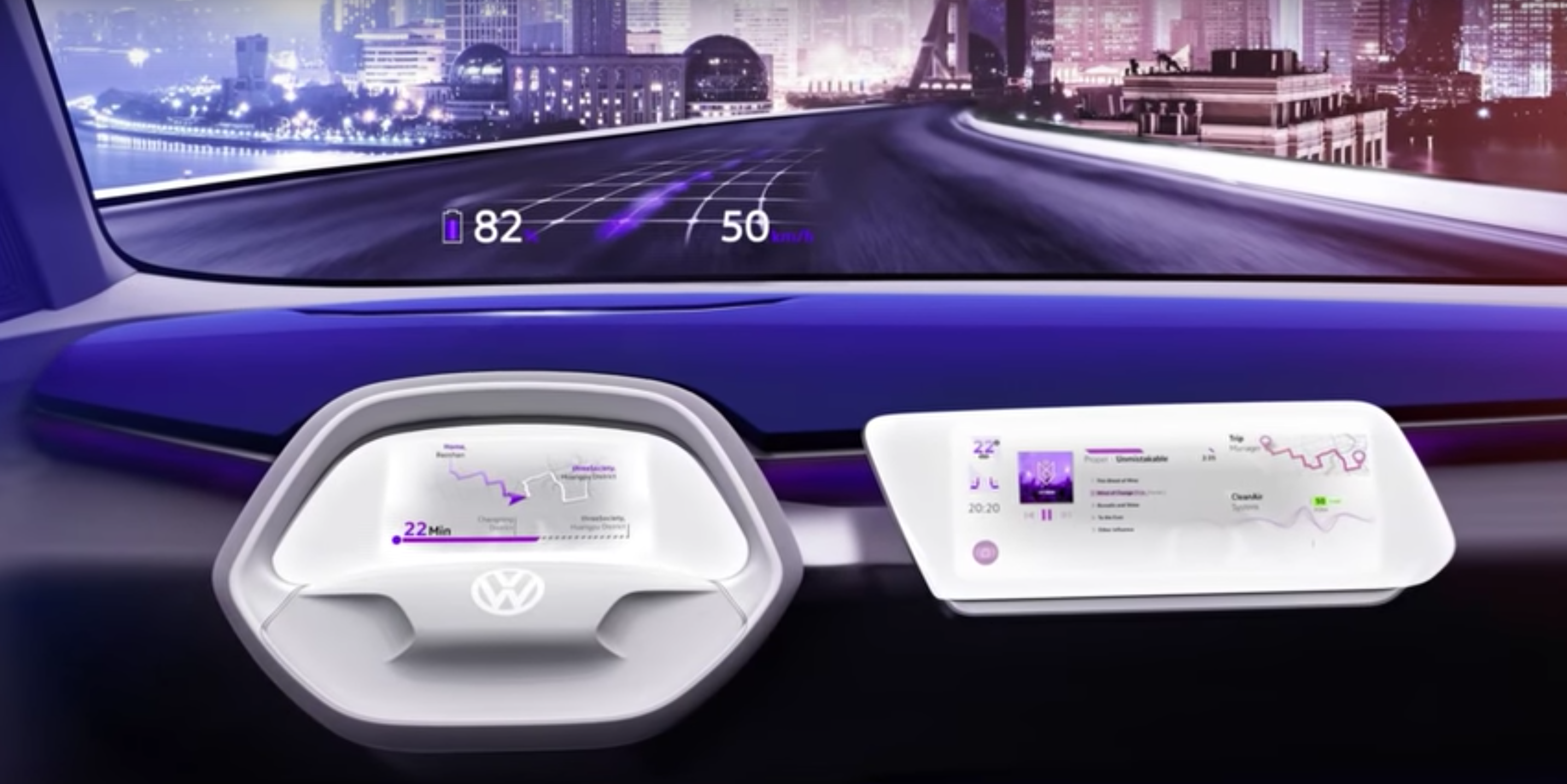 Finally, here’s a quick video of the prototype unveiled in Shanghai: