Santa Clara, California based Vintage Electric has just unveiled their new Scrambler S electric bicycle, with a style that invokes classic WWII-era motorcycles and with performance to match.

With so many electric bicycle designs available today, it is becoming difficult for any e-bike company, let alone an American e-bike company, to compete on price. With Chinese e-bikes undercutting prices of western alternatives, this American e-bike manufacturer has decided to focus on style and performance instead of joining the price race to the bottom.

The Scrambler S combines high performance mechanical and electrical components with a vintage design in an unmistakably unique and aggressive looking cruiser.

From the flat black paint job to the mock V-twin battery case and the classic yellow head lamp with wire grille, this bike definitely looks the part. The Scrambler S joins other WWII inspired electric bikes and motorcycles that seem to be making a comeback, such as the ReVolt R71 BMW reboot that we recently reported on.

But it isn’t enough to simply talk the talk. Beneath that vintage exterior is an e-bike with specs that are largely unmatched in the market. A massive rear hub motor powers the Scrambler S up to 36 mph (58 km/h) with acceleration that will have you sliding back in the classic leather seat.

Just take a look at the product video for the Scrambler S’s unveiling, which obviously invokes the epic Steve McQueen motorcycle chase scene from the 1963 classic WWII film, The Great Escape.

Not only is 36 mph super fast for an e-bike, it’s also super illegal in most of the US, so the Scrambler S also includes an option to electronically limit the bike to 20 mph (32 km/h) in order to keep it street legal until you reach your favorite trail or other private property. If you can resist.

Sustaining speeds of 36 mph requires a hefty battery. The Scrambler S doubles the already large battery pack found in the previous version of the Scrambler – up to an impressive 1,123 Wh. That’s more than twice the size of most electric bicycle batteries and is enough to power the Scrambler S for up to 75 miles (120 km), though at a more sensible 20 mph (32 km/h). 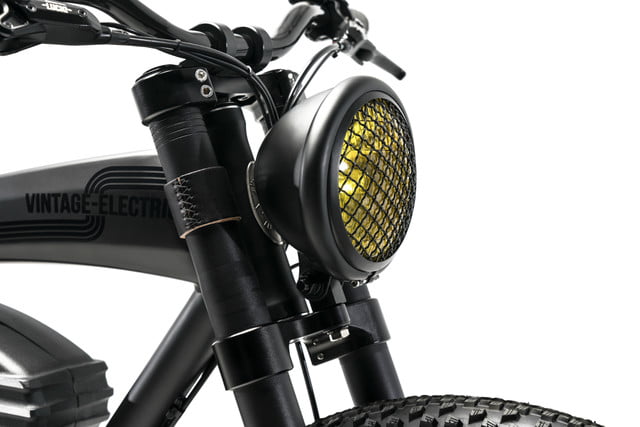 The battery and controller are enclosed in Vintage Electric’s iconic aluminum mock V-twin engine case, which not only creates its signature look, but also helps to cool that massive battery and powerful controller. 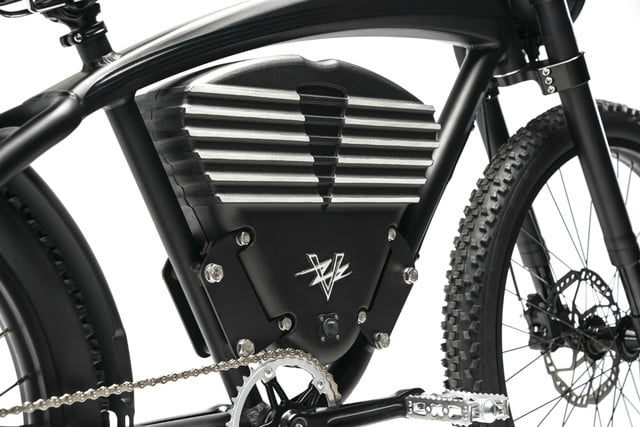 This power and style doesn’t come cheap though, ringing up at just under $7,000. Vintage Electric’s CEO Scott Brown readily admits that this isn’t an entry level e-bike and is not designed for the average customer:

Our typical consumer is often most interested in premium-quality products, has a passion for fun, and likes to arrive in style. Using a Vintage Electric bike for one’s transportation becomes a way of life, and with the ability of the new Scrambler S it is sure to over-deliver on all expectations. Let’s not beat around the bush. The Vintage Electric Scrambler S is a wolf in wolf’s clothing. It looks like it can go like hell… and it goes as fast as it looks! It is our most capable bike and holds a special place in the Vintage Electric lineup.

You said it, Scott.

Yea, this is an expensive e-bike. Sure, you could buy a powerful e-bike for a third of the price that goes sort of, kind of, almost as fast. But this isn’t a cheap imported e-bike. It’s an American designed and manufactured machine supported by a dependable warranty and frankly, it’s meant to be an over the top, stars and stripes waving, bald eagle screaming symbol of two-wheeled electric muscle.

If I can make an EV analogy, this isn’t the e-bike for your sensible Nissan Leaf owning neighbor. This is the e-bike for your other neighbor that already has a down payment made on his next Tesla Roadster. And if we can’t all enjoy looking at a little American design excess every now and again, well then just what is the point?

The Scrambler S probably won’t be gracing my garage anytime soon, but I’m glad that a machine like this at least exists. 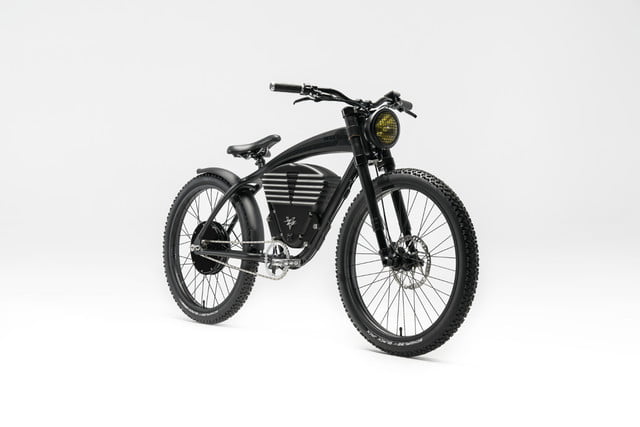