Tesla’s vehicles get rarely stolen thanks to its always-on advanced GPS tracking feature, but there are always a few non-techie thieves who make the mistakes and it results in some satisfying justice, like when a Model S was briefly stolen in Vancouver and the owner gave live-instructions to the police while they were catching up with the thief.

But there are also some professional car thieves who know exactly what they are doing.

We reported last year on two separate events of new Tesla vehicles being stolen in Europe and they were never recovered. Now we might have a good idea of what happened to those vehicles.

In each case, the key fobs weren’t stolen and the vehicles not trackable, which means that the thieves either have an unknown sophisticated way to start and drive the car, or they managed to quietly tow it.

The leading theory is that they were quickly dismantled for parts.

It’s not a secret to anyone that there are sophisticated networks of car thieves out there who manage to make vehicle vanish and reappear half-way around the world – in one piece or not.

Again, Tesla’s always-on advanced GPS tracking feature can deter some of those thieves, but apparently not all of them.

Today, the German police reported that they stopped a truck at the border coming from the Netherlands. The vehicle had several Tesla Model S parts in the back, including a whole battery pack: 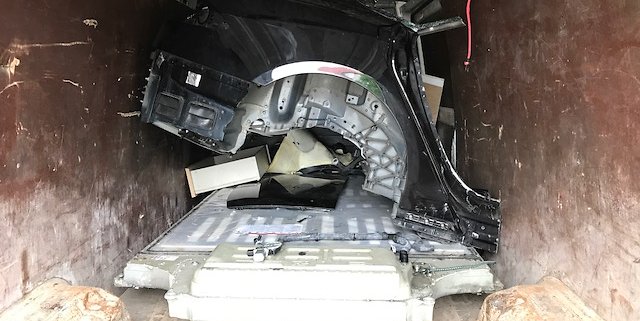 Berliner Zeitung reported that the 40-year-old driver claimed to have bought the vehicle parts in Amsterdam and presented a bill to back his story.

The police investigated the parts and instead found that they belong to a Model S stolen in the Netherlands four days ago and that the bill was forged.

Like in the two previous cases in Germany, it’s not clear how the vehicle was stolen in the first place.

For owners, it’s important to make sure that your Tesla account is secured with a strong password and to keep your key fobs in a secure location at a safe distance from the vehicle when parked.