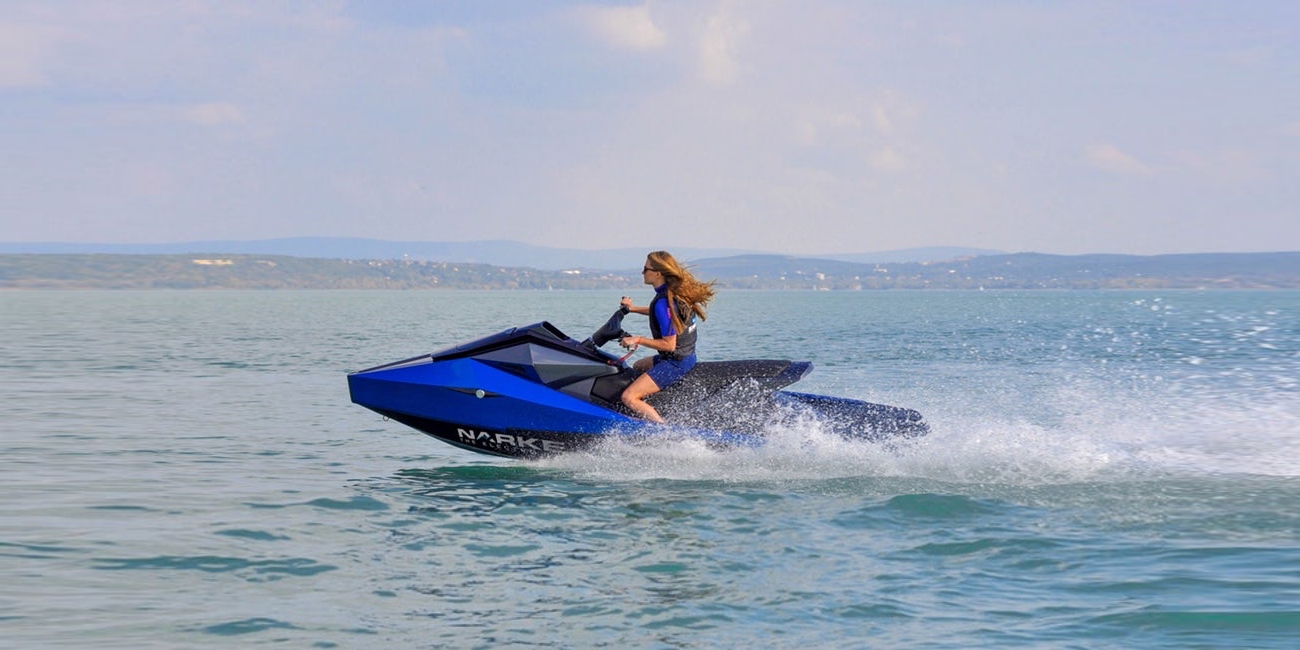 There have been a number of interesting electric jet ski concepts that have popped up on our radar over the last few years, including a stand up jet ski startup purchased by Nikola Motors as well as a slick dune buggy concept by Hyundai that converts into a jet ski.

However, neither of these concepts have made it to production yet, which is why Hungarian company Narke is claiming to have the world’s first production electric jet ski.

Visually, the Narke is quite striking.

Depending on the angle of the carefully lit PR photos, it almost looks like closeups of an experimental new stealth fighter jet. Sharp angles and clean lines replace the curving hull found on most other conventional gas-powered jet skis.

According to the company’s press release:

Narke differs from traditional jet skis not only in its basic technology, but also as a representative of a new era with its sound and appearance. The electrojet is extremely quiet and its design focuses on sophistication and cleanliness.

The sleek styling is the result of a light weight, carbon fiber reinforced composite structure designed to efficiently cut through the water or glide on top at speed.

Speaking of speed, the Narke is designed to reach speeds of up to 55 km/h (34 mph), though that speed is electronically limited.

Power comes from a water-cooled 45 kW AC motor designed in-house by the company. The battery is a removable Li-ion pack that can be recharged from 0 to 80% in just 2 hours. Narke claims that the battery should be sufficient for an hour and a half of “normal use”. But because the battery is swappable, you could theoretically keep a spare handy if you plan on spending more time out on the waves.

The digital display shows an impressive amount of info and even appears to have bluetooth connectivity, potentially allowing for integration with your phone.

So far Narke has been testing their first models on Lake Balaton, south of Budapest. The company has not yet released pricing or release date info, but we’ll be sure to keep pestering them until they do. 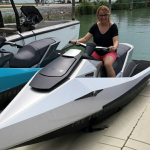 The Narke may be the first production jet ski, but it is still just the most recent in an impressive new industry of electric powered watercraft. Just last week we learned about a crazy new premium electric surfboard. And earlier this summer we reported on a new hydrofoil electric bike that lets you pedal above the surface of the water – a product which actually just started taking pre-orders this week.

When it comes to power, the Narke isn’t going to win any awards. It’s not the peppiest or the fastest jet ski on the lake.

However, I do remember the engine noise being really annoying and detracting from the beauty of the islands. So I would definitely have traded some speed for a whisper quiet experience where the only noise was the splashing of the waves around me and my wife screaming while trying to hold on.

As is often the case when traditional gas-powered vehicles move towards electric power, the first few models might not be the most thrilling options. However, these are important steps towards a future where most vehicles are electric powered, whether on land, air or sea.