There are a number of impressive competitors in the high-end electric bicycle market, including innovative offerings from companies like Optibike and Stromer. To remain competitive, companies are racing to outdo each other on high-tech features and novel designs.

Haibike recently revealed their new FLYON line of electric bicycles, which have certainly embraced a creative approach to remain both innovative and creative. From an incredibly torquey in-house motor design to a ram air cooling intake, Haibike has embraced thinking outside the conventional e-bike box.

“With FLYON, we are introducing the next generation of ePerformance. New motor, innovative operating concept, more connectivity and intelligent design. Whether in terms of integration, digitalization or performance – FLYON sets new standards in the high-end sector. Behind the first ever Haibike ePerformance system stands German engineering power combined with intelligent technology and many years of know-how.”

The all-carbon frames on the FLYON e-bikes house Haibike’s proprietary TQ HPR120S mid-drive motor. The motor itself has one of the highest torque ratings in the industry with 120 Nm (88.5 ft lbs) of torque. Unlike most other mid-drives on the market, such as those offered by companies like Bosch and Brose, the TQ motor’s axle is mounted directly to the pedal cranks and chainring. 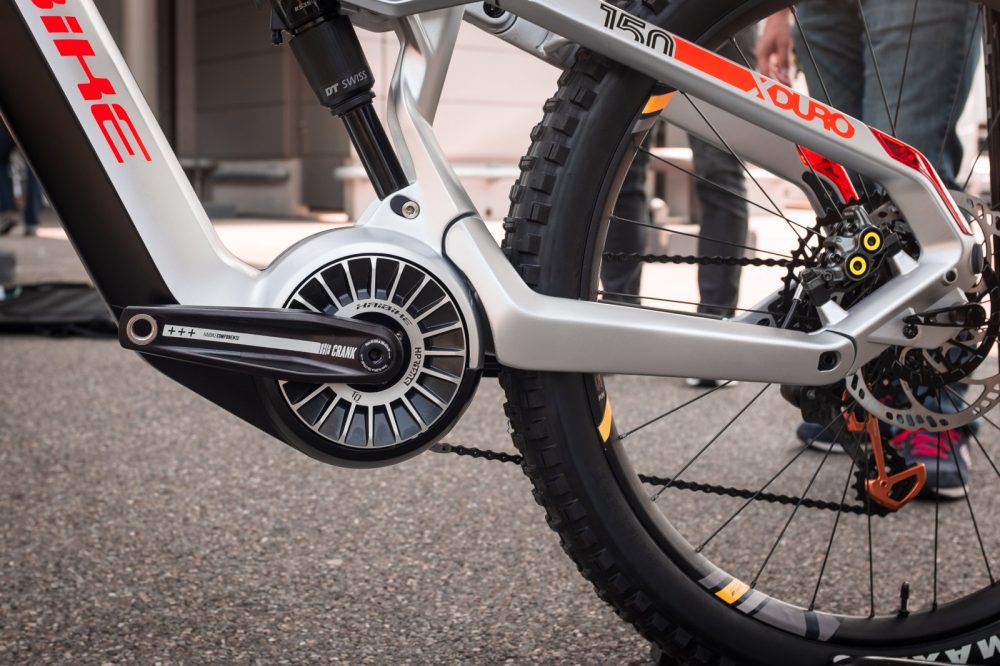 The motor’s massive torque is fed by a 48V, 630 Wh Li-ion battery. The battery is housed inside the downtube of the carbon frame but is fully removable. And to keep that battery cool while it is powering such a beefy motor, the FLYON line has included a distinctive split grill and air intake at the front of the bike, which forces cooling air down around the battery. 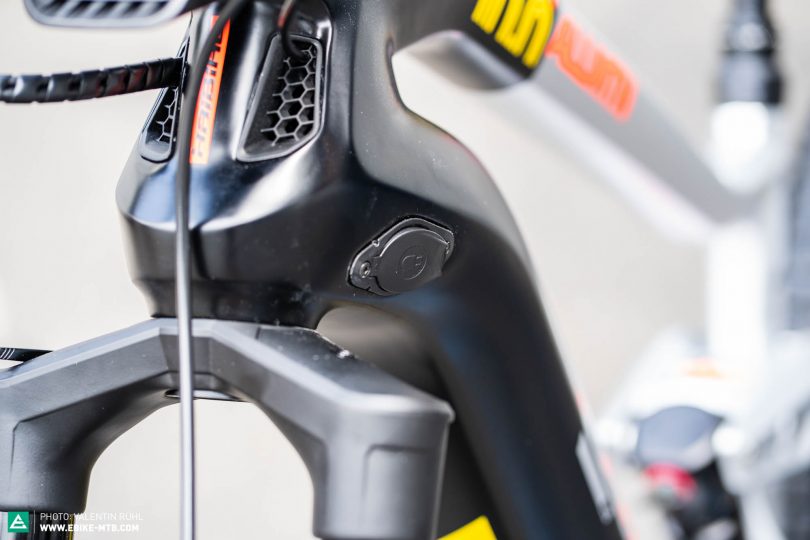 The e-bikes come standard with a 4 A (approximately 200 W) wall charger, but Haibike offers a high power 10 A (approximately 500 W) charger that can fill an empty battery to 80% capacity in just one hour.

Full specs on speed and range aren’t yet available, but the speed will likely be electronically limited to meet local regulations in each country where the e-bikes are sold. And with a larger than average 630 Wh battery, range shouldn’t be an issue for most riders.

In addition to the motor and battery specs, the FLYON line also surpasses most other e-bikes with an impressive list of other innovations and features.

For speed measurements, a special disc with 18 magnets is used on the rear wheel’s hub, providing more precise measurements over older sensor methods used on most electric bicycles.

That speed measurement is displayed dynamically on the stem-mounted color display. The faster you ride, the larger the speedometer measurement appears, making it easier to quickly glance at your speed and keep your eyes on the road when traveling faster. 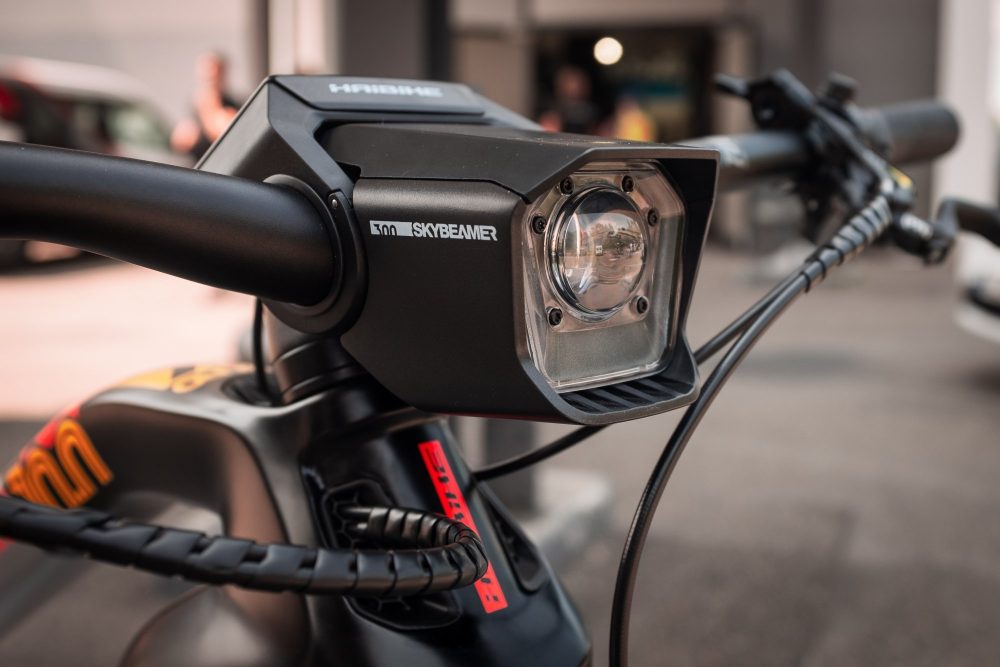 Lights are integrated directly into the e-bike’s frame and are powered by the internal e-bike battery. No more replacing bicycle light batteries!

The front headlight is a whopping 5,000 lumens and is built directly into the handlebars, merging into the display housing. It can be either manually operated or employ a light sensor to automatically illuminate when necessary. The main headlight offers a low beam and high beam mode, depending on whether you just want to simply be seen or really illuminate your surroundings.

The rear lights are incorporated seamlessly into the seat stays. 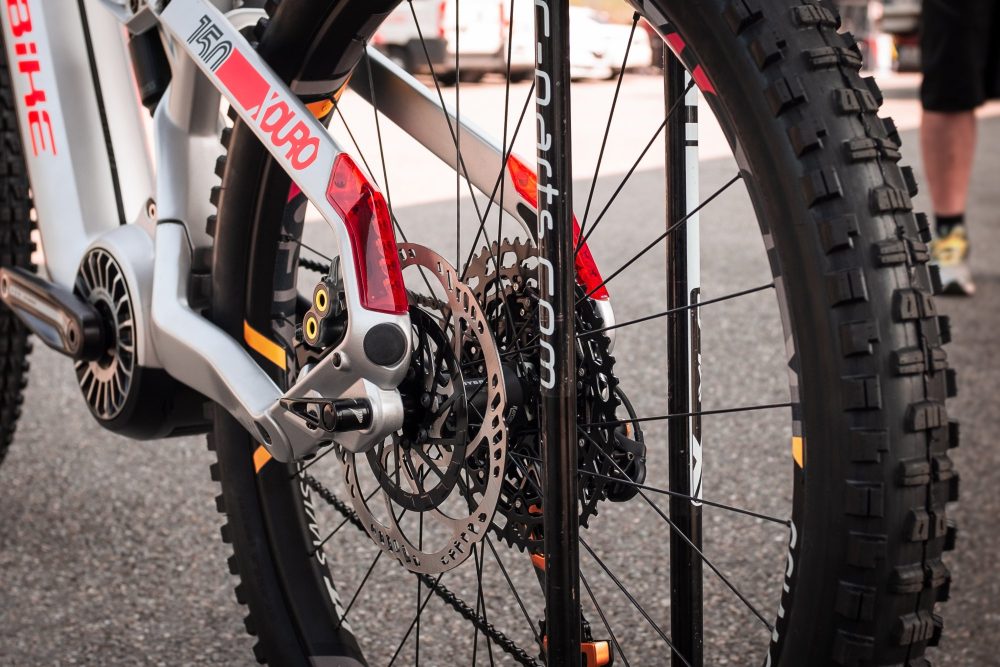 The FLYON e-bikes include built-in GPS sensors inside of the frames, and the frames are also user adjustable to dial in the perfect geometry for each individual rider.

I love seeing innovation like this in the e-bike industry. Of course without riding the bike yet, its hard to say if that innovation results in an improved ride and experience, but I am quite optimistic based on the design effort and high-end component selection found in these e-bikes.

Of course these e-bikes aren’t for everyone, and will likely only find their way to truly dedicated and hardcore riders. But considering that high quality carbon bikes with top-shelf components can already cost $5k+ without electric assist, the price of these high performance e-bikes is reasonable for the market that they serve.

Also, on a more technical note, I suspect that the FLYON line packs even more punch than they are letting on. The battery is described as 48V, but it is also apparently a 56 cell battery. I have quite a bit of experience building Li-ion batteries, and battery nerds like me know that you can’t make a 48V battery with 56 cells, but you can make a 52V battery like that, which is a common method used to eek out extra power over a 48V system. So I suspect that this e-bike is really a wolf in sheeps’ clothing with a hot-rodded 52V electrical system, giving it a speed and power boost of around 8% over a comparable 48V system. If anyone can get their hands on either the battery or charger for one of these and do a voltage test, I’d love to hear what you find!