It seems like every week there’s a new electric bicycle company or model being announced. With so many different options available for consumers, it can be hard to keep track of which companies are which.

Optibike has been setting the standards in the electric bicycle industry for the last decade, ever since their OB1 electric bicycle popularized internally mounted large capacity batteries and mid-drive motors – years before large companies like Shimano, Bosch and Bafang followed suit.

Right off the bat, the R15C has an impressive list of specs.

The bike comes standard with a removable 1.5 kWh Li-ion battery (52V 29Ah), which is already a 38% increase over the previous R15’s enormous battery. 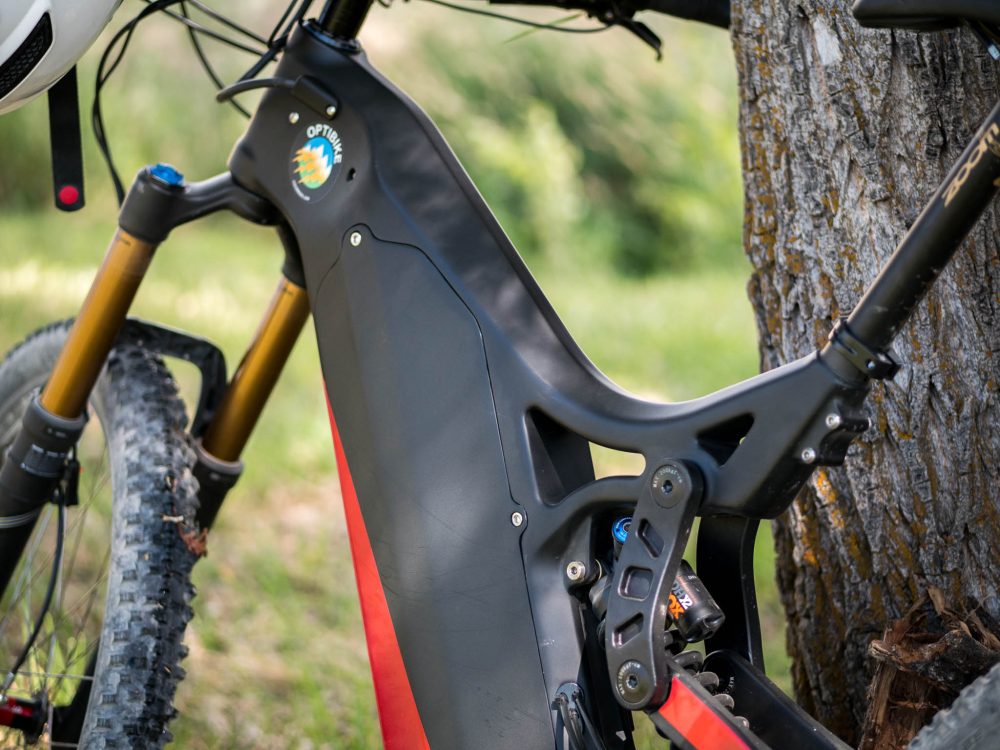 That massive battery pack is good for 100 miles (161 km) of range when the bike is kept to 20 mph (32 km/h). But with a motor-only top speed of 28 mph (45 km/h), it may be hard to resist the urge to go full speed. Especially considering that with Optibike’s proprietary mid-drive system, you can pedal even faster than motor’s top speed of 28 mph.

On some other bikes, I’d be worried about hitting such high speeds, but the R15C is loaded with top-quality parts that make the bike safe for bombing trails at break-neck speeds.

The frame and swingarm are made entirely of high strength and lightweight carbon fiber. Even the removable battery case is carbon fiber. 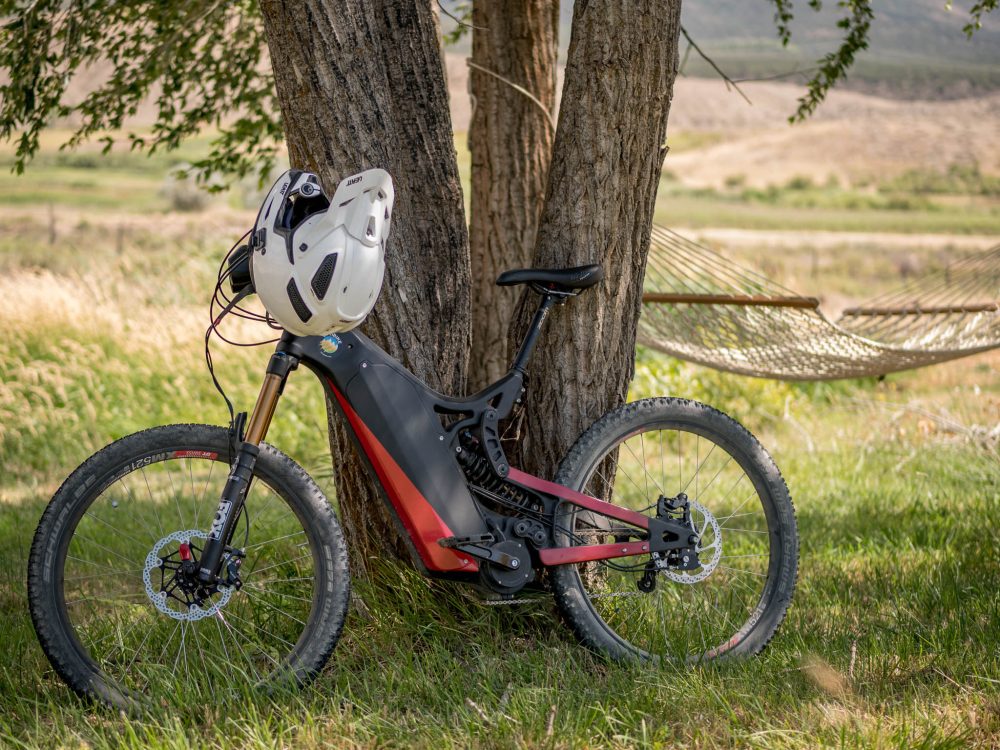 The 160-mm front and rear suspension are both Fox, with a 36 mm e-bike specific fork and motocross styled rear linkage.

The headset is a Cane Creek Angle Set that is user-adjustable between 63.5 to 66.5 degrees to allow for a wider range of handling and riding styles. Brakes are SRAM Code units and the rear hub is an internally geared Rohloff A12. That rear hub alone costs well over $1,000, and that’s before it’s been hand-built into Optibike’s 27.5″ wheels designed to reduce rolling resistance.

The mid-drive motor is rated for 192 Nm (142 ft-lb) of torque, 1,650 W of continuous power and 2,500 W of peak power in the highest power mode. However, the R15C also offers two lower power levels that keep the bike street legal in the US as a Class 2 electric bicycle with 750 W of power and a lower 20 mph electronic speed limit. 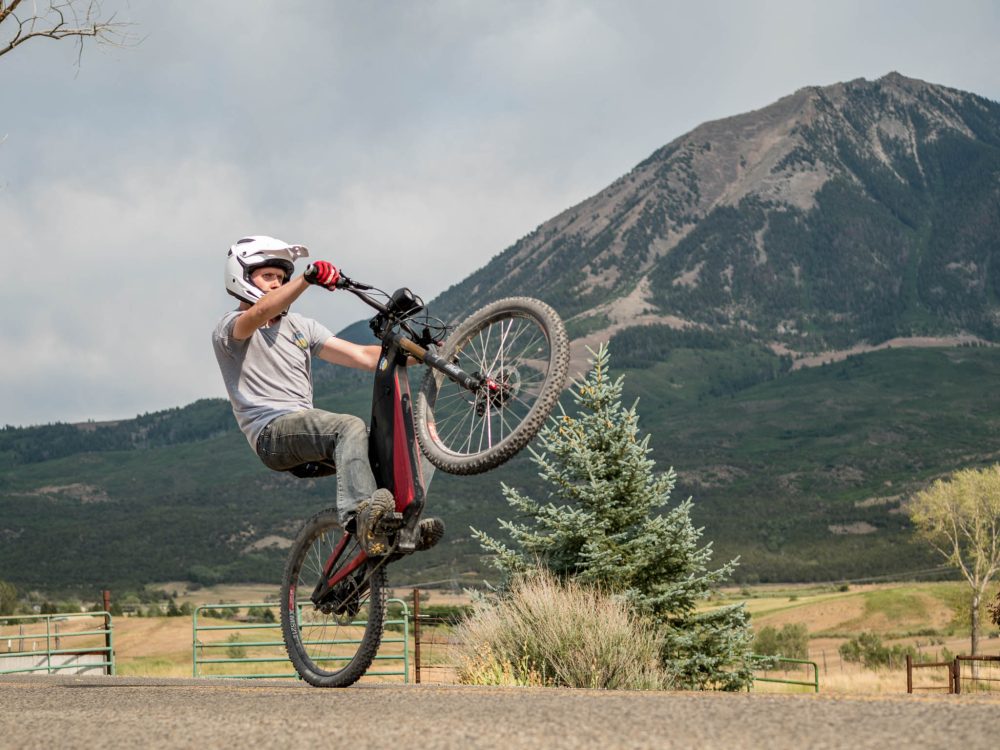 The bike weighs in at 68 lbs (30.8 kg). That’s not light by bicycle standards, but it’s a veritable featherweight by electric motorcycle standards. Considering that this thing falls somewhere in between, that’s not too shabby.

The R15C is a combination of everything we have learned in the last 20 years of designing and building electric bikes and racing motocross for 20 years. There is no other bike in the world with all the features and performance of the new R15C. This e-bike uses all the best components. This ensures the bike will continue the legendary durability of the Optibike R Series. Most of the Optibikes manufactured in 2008 are still on the road today. This is a testament to the quality of Optibike.

Optibike is known for their high quality range of e-bikes, but they aren’t known for being easy on the wallet. While their more entry-level e-bikes start closer to the $3,500 range, the R15C will set you back $13,900. Despite the high price, it appears to be in high demand, with August, September and October 2018 deliveries already sold out, and reservations now available for November delivery.

Of course you didn’t expect that a high performance carbon fiber e-bike with 5x the battery capacity and 10x the motor power of a budget e-bike would come cheap, did you? At $13,900, the R15C is one of the priciest e-bikes on the market. But considering that it wouldn’t be a surprise to see these e-bikes still on the road in a decade or more, that price might be more fair than you realize.

While I would love to commute to work everyday on a bike of this quality, it’s not really meant for that. The high performance and high quality parts are all designed to make this the fastest, best handling and safest e-bike for motocross style riding. And that last bit is perhaps the most important.

When you’re flying down trails or through the air, the last thing you want worry about is whether your machine can handle the punishment. At those kind of performance levels, safety and quality are worth every penny. And in a sport where you have to pay to play, penny-pinching isn’t really an option.

For the rest of us mere e-bike mortals, we’ll have to watch from the sidelines on our commuter and budget e-bikes.