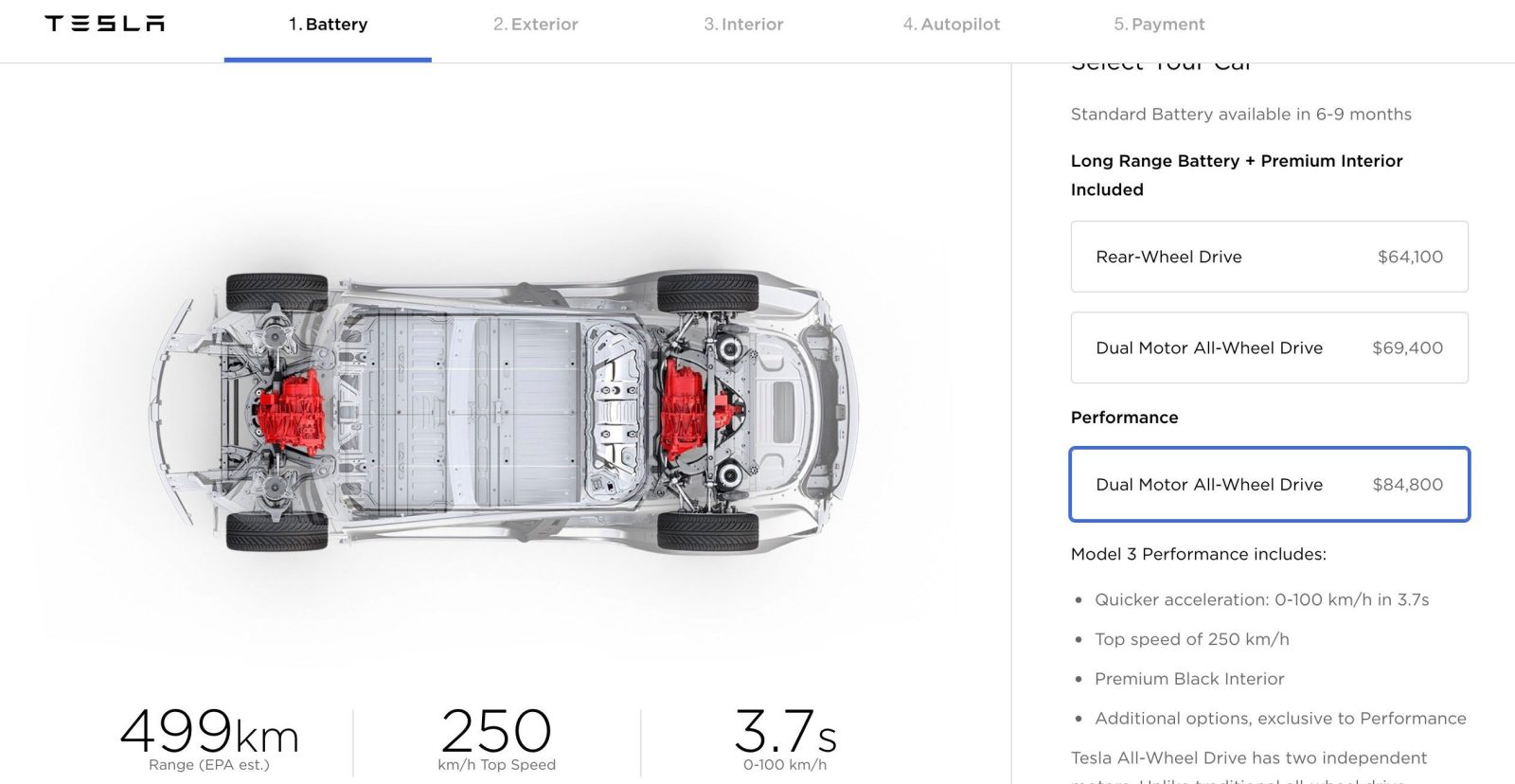 The automaker has also changed some of the timelines for deliveries and it opened orders for dual motor and performance vehicles in Canada.

The biggest change is the pricing of the Model 3 with dual motor and the performance version of the car.

Dual Motor went from a $5,000 option, like it was for the Model S, to a $4,000 option. The vehicle now starts at $53,000 with the Long Range battery pack, which is still the only battery option available.

Tesla updated the timeline for the standard battery to 6-9 months.

Here’s a look at the updated online design studio (Thanks to Daniel Scott):

The Model 3 performance version used to start at $78,000, but Tesla has now made several features optional.

Buyers can add the “Performance Upgrades” package for $5,000. It includes an increase of the top speed from 145 to 155, a carbon fiber spoiler, 20” performance wheels, and aluminum alloy pedals, Michelin Pilot Sport 4S tires and red performance brake calipers.

Tesla confirmed to Electrek that it will retroactively apply the new pricing to customers who have already placed their orders.

As shown on the updated design studio above, Tesla also updated the color options.

The white interior is now also still available with the performance version and it becomes a $1,500 option over the standard black interior.

As for delivery timelines, Tesla is shifting priority to the performance version with a 2 to 4-month delivery window after confirming the order.

The Long Range battery pack with rear-wheel drive motor, which has so far been the only vehicle in production, is now getting a 3 to 5-month delivery window, like the dual motor version without performance package.

I finally placed my order!

With the changes, Tesla also opened orders in Canada for the dual motor and performance versions.

I went all out with a fully equipped performance Model 3 in Obsidian black.

Even though I’m in Canada, I still got the ~2-4 month delivery window.

We are clearly seeing a shift to focus on higher margin Model 3 options as Tesla is aiming to become profitable during the second half of the year.

I think it also looks good for the ramp-up of Model 3 production since we are getting reports of Tesla is sending out a massive new batch of invitations to configure along with those changes.

Let us know in the comment section below if you received an invite or have access to the design studio and let us if you decided to order.