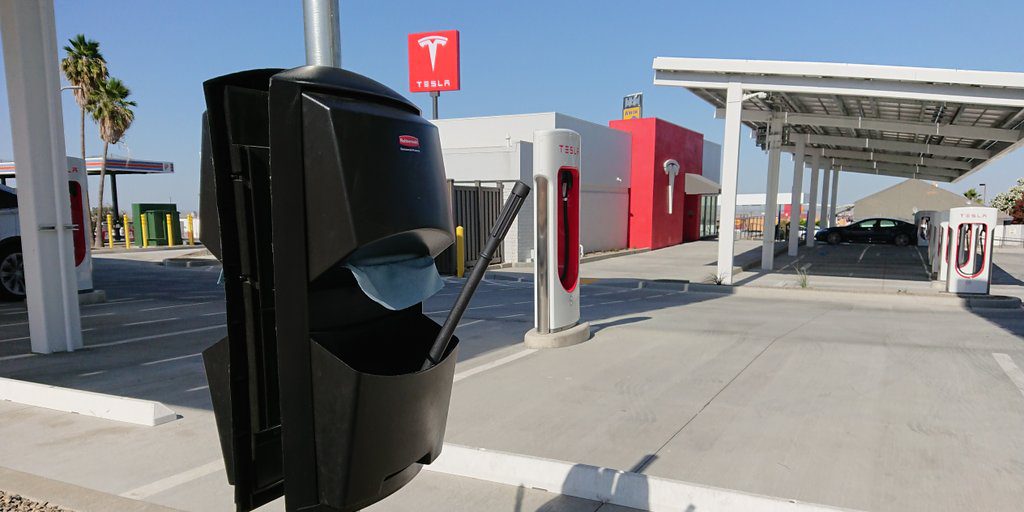 Tesla’s Supercharger network is gradually starting to replace gas stations for Tesla owners, but it has so far been missing an important tool that drivers find at gas stations: a squeegee.

Now it looks like Tesla is finally starting to add the requested feature to some Supercharger stations.

But for long-distance travel, they do become very similar in the sense that drivers need the same amenities.

Tesla’s new type of Supercharger station with a lounge, bathroom, and coffee shop, which was first built in Kettleman City between Los Angeles and San Francisco, is the first of Tesla’s Supercharger station that is getting a lot closer to the gas station experience minus the gas.

And now Tesla is adding windshield cleaning stations at the Supercharger site:

Gas stations beware, @Tesla is figuring out the basics 😉 pic.twitter.com/lxYgPoq9AK

It’s apparently not the only one since another squeegee station was also spotted at Tesla’s Springfield, Missouri Supercharger station:

Springfield MO has it figured out. They even give free coffee for @Tesla owners that are charging their car. pic.twitter.com/qndbxySBHI

I have never seen one of those at any Tesla Supercharger that I visited, but hopefully, Tesla starts to ramp up their deployment at all Supercharger stations.

Tesla had previously tested other services to wash your vehicle at their Supercharger stations.

In 2016, they had a trial program at the Fremont Supercharger with Eco Green Auto Clean, a car wash company with a process using less than a cup of water to clean one car.

They were looking to offer the service at Supercharger stations, but it apparently never expanded after the trial program.

Now it looks like they are going with the more simple approach of making a squeegee available to drivers using the Supercharger stations.

Another highly requested feature that Tesla owners want to see at Supercharger stations is an air pump to adjust tire pressure.

Tesla CEO Elon Musk confirmed last month that the automaker will be adding them to new Supercharger stations.

He also said that Tesla’s new Supercharger V3 stations could launch as soon as this summer and we recently reported on Tesla’s updated map of planned Supercharger expansions for the next year.

What else you would like to see at Supercharger stations? Let us know in the comment section below.