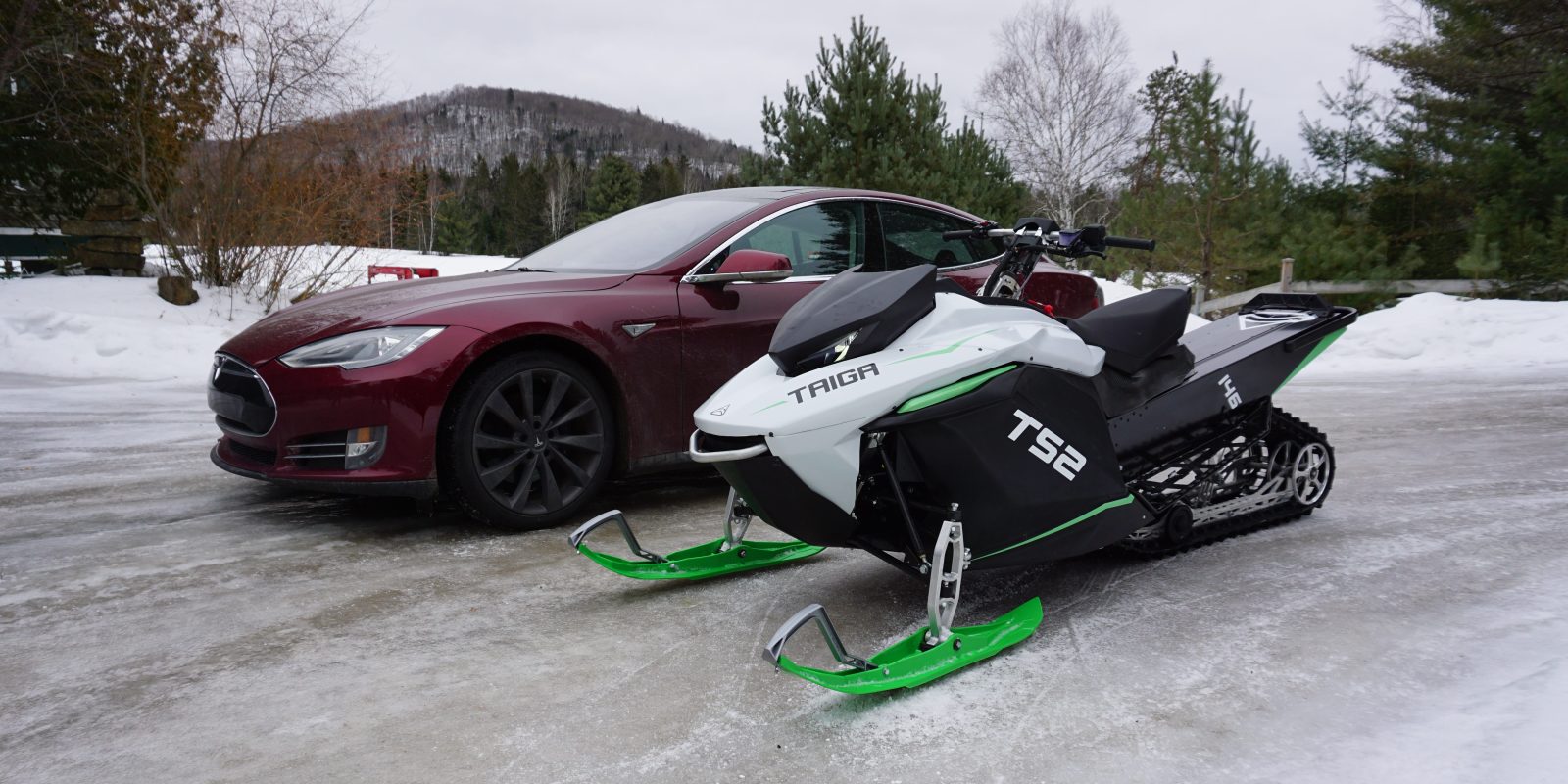 As we often like to remind everyone here at Electrek, electric propulsion is slowly but surely taking over every segment of ground transport one at a time – and not just electric cars.

Now a new startup says that it’s time for snowmobiles, which are surprisingly polluting and therefore, an important segment to electrify.

The Montreal-based startup Taiga Motors invited us to Mont-Tremblant this week to witness the unveiling of what they claim will be “the world’s first production electric snowmobile”: the Taiga TS2.

In 2015, the company spun out of McGill’s racing team where the three co-founders, Paul Achard, Gabriel Bernatchez, and Sam Bruneau, worked on electric powertrains during their engineering studies at the university.

During a presentation at the unveiling (embedded further down), Bruneau said that the team was inspired by Tesla to forget any preconceived idea of what a snowmobile should be and instead design an electric snowmobile from scratch.

That approach turned out to be crucial to the development of the vehicle since simply converting an existing snowmobile by replacing its engine with an electric powertrain would have resulted in a much heavier machine which is a dealbreaker for a snowmobile.

The team says that they managed to keep the weight “under 500 lbs fully loaded,” which is competitive with current options on the market, but while being equipped with a significant 15 kWh battery pack.

That battery pack powers a PMAC motor with 250 N.m. of torque and about 80 kW of power output, which is a lot of power for a machine that weighs less than 500 lbs.

It’s why they can achieve a scary 0 to 60 mph acceleration in just 3 seconds.

Now I’ve driven a lot of quick electric vehicles with a similar acceleration, but it’s simply not the same when you are not inside a passenger cabin and on the snow.

We went to a deserted airport to do some test runs. I don’t say that often, but unfortunately, the snow started to melt here in Quebec and therefore, we were riding on compacted snow, which is less than ideal.

I don’t think we managed to achieve that 3-second 0 to 60 mph acceleration in those conditions, but we nonetheless had some fun and could definitely feel the power of the TS2.

Here’s some footage of the test ride:

The prototype had its issues. The team had some problems with the steering system before the test rides and it definitely felt stiff at times, but they thought the overall machine was good enough to demo instead of waiting another year for the next winter season.

In my opinion, they were right.

It’s quite impressive that a team of about 17 people put together a working electric snowmobile built mostly from scratch in 3 years and it’s arguably not only competitive with current snowmobiles on the market made by giants like BRP and Artic Cat, but also significantly better in many aspects.

Of course, the two main advantages are zero-emission and significantly less noise pollution.

With little to no standards and many two-stroke engines, current gas-powered snowmobiles are generally incredibly polluting – sometimes 50 times more polluting than an average car. People operate those machines to experience the great outdoors and it’s a shame to have to pollute your environment to do it.

Electric snowmobiles are going to fix that.

Then there’s the noise aspect. You can hear a gas-powered snowmobile coming from miles away, which is again not what you want to hear in nature.

Taiga’s TS2 is extremely quiet aside of course from the noise of snow being pushed underneath the vehicle, but that’s inevitable and only audible from a relatively short distance. 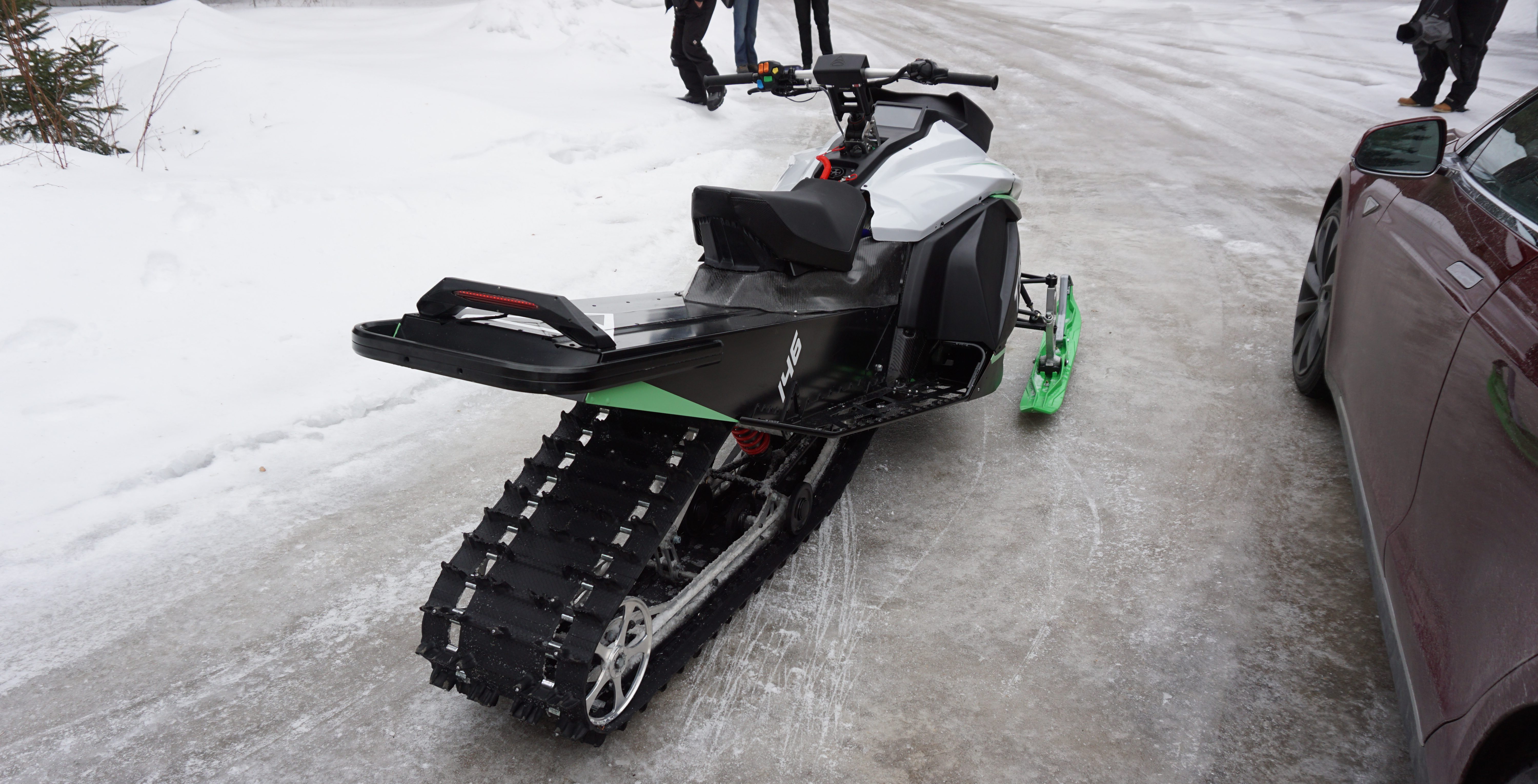 There are also other aspects that differentiate Taiga’s electric snowmobile from anything else on the market.

As we previously discussed, they were inspired by Tesla and like the electric automaker, they put a lot of effort into software in order to make the vehicle fully connected and capable of over-the-air software updates in order to improve over time.

That’s something that has never been done with snowmobiles and Jonah Ryan-Davis, a firmware engineer at Taiga who also previously worked at Tesla, told Electrek that everything is already in place to be able to push new updates.

They are not sure yet what those updates will feature, but they will listen to feedback once the TS2 will be in the hands of customers and try to build new features with the help of the community.

Owners will also be able to configure their snowmobile from a mobile app with different riding modes.

As for the range, the TS2 can travel 100 km (62 miles) on a single charge. Charging can be done in about 2 hours through level 2 charging with an onboard charger and the company says that it will also offer a DC fast-charging option for 80% charge in 20 minutes.

While the range might not seem like much, it’s actually quite impressive when you consider that Taiga claims the vehicle will maintain this range even at -30 Celsius.

The company also says that they will offer different versions of the vehicle optimized for different uses: Utility, Touring, Crossover, and Mountain.

Taiga is currently aiming to bring the TS2 to market next year at a starting price of $15,000. They are currently taking reservations with a $500 refundable deposit for people who want to be among the first to go electric for their winter powersports and in order to gauge demand for the vehicle ahead of the start of production.