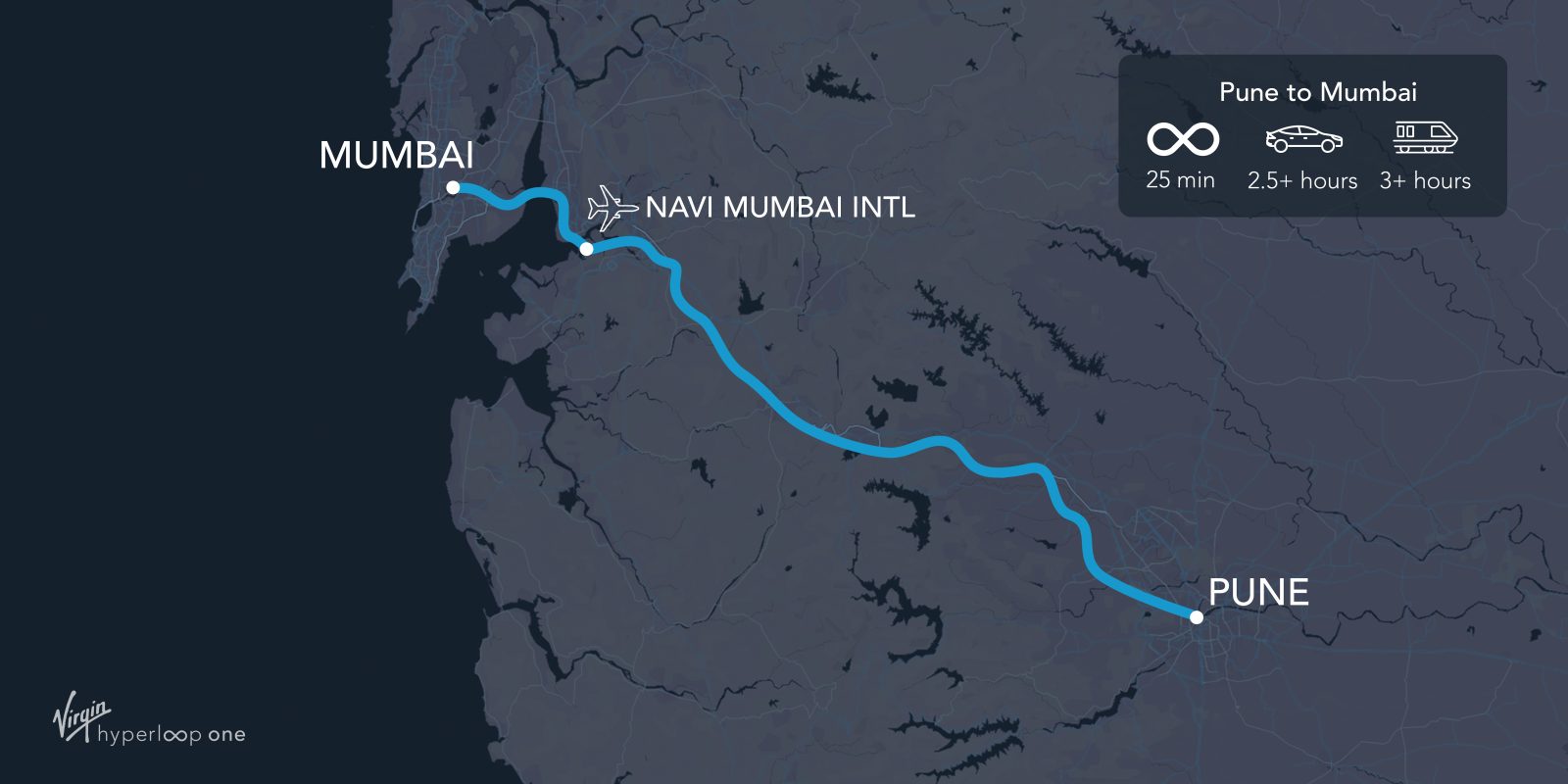 Hyperloop One hasn’t been in the news as much since they secured a new investment from Richard Branson’s Virgin and changed their name, but now they are coming back into the spotlight with a deal presented as “historic”.

They signed an agreement with India to build a major hyperloop system between Pune and Mumbai.

The new agreement between Virgin Hyperloop One and the Indian State of Maharashtra aims to address both issues by offering a high-speed and fully electric mode of transportation to connect Pune and Mumbai.

The hyperloop route will link central Pune, Navi Mumbai International Airport, and Mumbai in 25-minutes instead of the roughly 3 hours it currently takes by car and train.

“I believe Virgin Hyperloop One could have the same impact upon India in the 21st century as trains did in the 20th century. The Pune-Mumbai route is an ideal first corridor as part of a national hyperloop network that could dramatically reduce travel times between India’s major cities to as little as two hours. Virgin Hyperloop One can help India become a global transportation pioneer and forge a new world-changing industry.”

The framework agreement with the local government was announced after the results of a pre-feasibility study, which showed that the hyperloop system could support 150 million passenger trips annually between the two megacities where 26 million people live.

“With Virgin Hyperloop One, we can create a sustainable infrastructure that will enhance the State of Maharashtra’s competitiveness and attract new investment and businesses. The Pune-Mumbai hyperloop route will be an economic catalyst for the region and create tens of thousands of jobs for India’s world-class manufacturing, construction, service, and IT sectors and aligns with Make in India initiatives.”

Furthermore, the company is building the hyperloop system to also support the transport of cargo. They say that it will also have the potential for “the rapid movement of palletized freight and light cargo between the Port of Mumbai and Pune, creating a robust backbone for on-demand deliveries, supply chains, and next-generation logistics.”

The project now enters a six-month in-depth feasibility study. The results of this study, which will build on the pre-feasibility study, will be used to the design a public-private partnership structure that will be in charge of building the system using Virgin Hyperloop One’s technology.

The company recently tested their full-scale system in its test loop in Nevada and announced that it achieved a new record speed with their hyperloop.

They expect that construction of the first phase, which will consist of a demonstration track for commercial applications, will begin in “two to three years.” The full passenger route between the two cities would begin construction in five to seven years, according to the company.

While it still sounds like it’s quite far into the future, which is often the case with massive infrastructure projects, it looks like a serious commitment from India.

The country is in dire need of more efficient and less polluting modes of transportation.

As we reported last year, the smog was so bad in Delhi that it caused a massive pileup of cars as drivers couldn’t see in front of them on the road. Similar issues are not uncommon now in the country’s cities.

In order to curb the carbon emissions from its growing economy, India is exploring ways to push its entire fleet to be electric vehicles only by 2030.

But an electric and potentially solar-powered hyperloop could also have a good impact.