BMW has just released pricing for the new BMW i8 Roadster, which goes into production next month, according to BMWBLOG.  The starting price will be $163,300, putting it in position as the most expensive BMW available in the US.

The BMW i8 coupe has also been updated, and will set you back $4,100 more than last year’s model, with a base price of $147,500.  BMW is taking orders now at your local dealership and cars should be hitting dealerships in April or May.

There are a few additional options available on the car which can add up to about $10,000 to the price of each modes.  BMW’s laser lights are a $6,300 option, the “Tera World” upgrades which include black brake calipers with ceramic controls are a $2,500 option ($3,700 on the coupe, which includes additional upgrades in the package), and premium paint colors will set you back $1,800.

As we reported back in November, the BMW i8 Roadster has similar performance specs to the coupe, though the coupe’s performance has been slightly updated for the new model year.  The model has a slightly larger battery than before (11.6kWh, up from 7kWh), which gives a little more all-electric range and a little more horsepower from the electric motor.

Overall, performance is still quite similar to the previous model, with a 0-60 time of a bit over 4 seconds and a top speed of 155mph.  The convertible i8 Roadster is slightly heavier than the coupe and thus slightly slower 0-60, by a tenth or two.

The i8 Roadster’s convertible roof can be opened or closed in less than 16 seconds and can be operated at a speed of up to 31 miles per hour, which is convenient if you encounter unexpected weather changes while cruising down the coastline.

I’ve driven the i8 and was impressed by its braking and handling (particularly on turn-in), but not at all impressed by its power. The car is sluggish and not as punchy as a performance EV should be, as it relies on a 3-cylinder engine for most of its oomph.

I absolutely love the design of the car, it’s the most interesting thing BMW has ever made, and the fact that it ever went from concept to production is a testament to BMW trying to do something new.  And the design isn’t just different for the sake of being different, it’s a reflection of the new materials technology (CFRP, carbon fiber reinforced plastic) which BMW used, making certain design elements possible.

For example, the “hole” above the taillights was made possible by using molded CFRP rather than stamped metal, and allows the car to maintain attached airflow and reduce eddies in the air behind the car, making the body more aerodynamically efficient without a loss in downforce and looking futuristic at the same time. 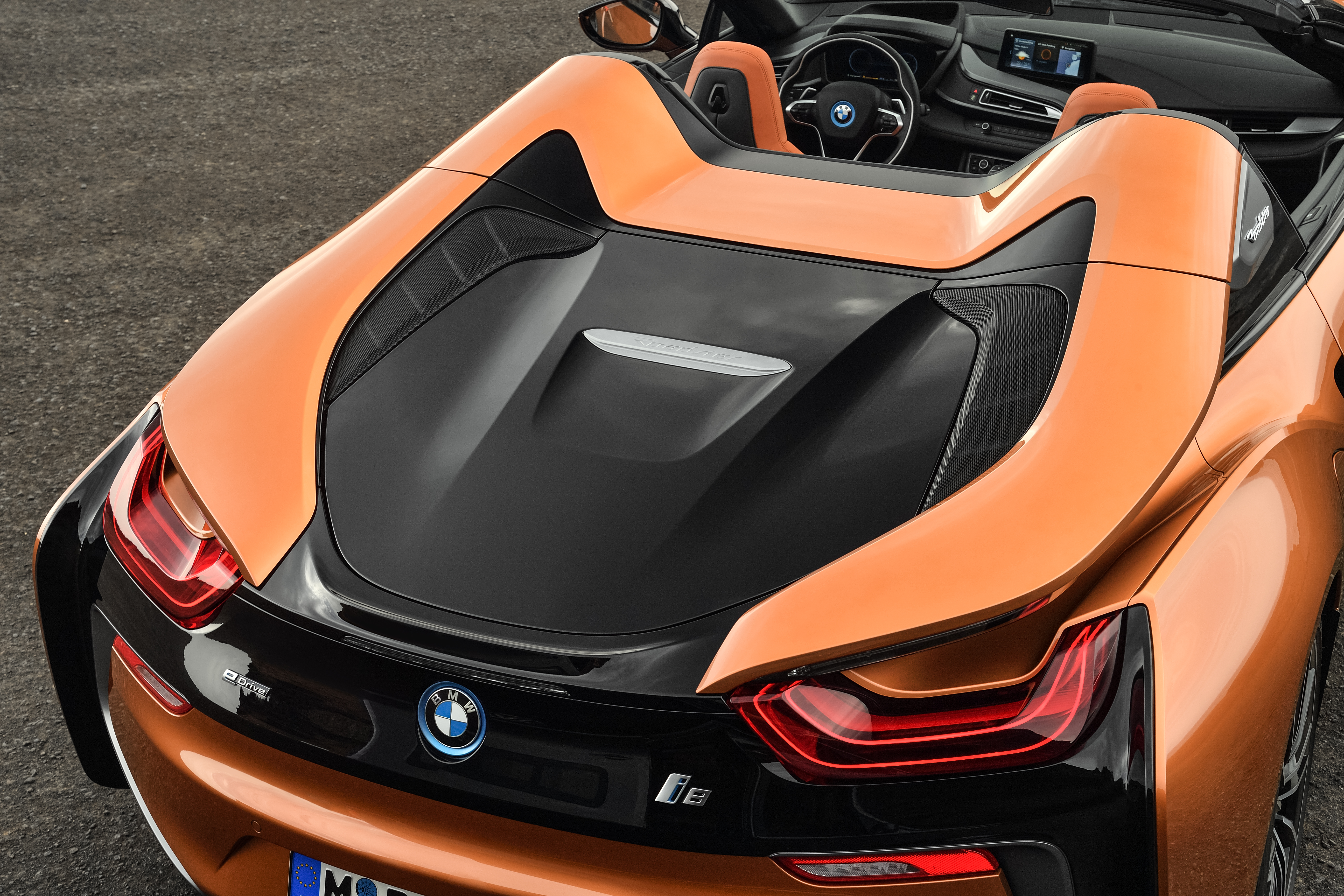 But this car really gets held back by the 3-cylinder anchor under the hood.  They need to get rid of it.  The car should be full electric.  Almost two years ago now we reported that an all-electric i8 might be coming, but that update still isn’t here.  We thought the new generation of the vehicle, scheduled for 2018, might include an all-electric option, but instead it only includes this minor update to performance and a ~$16,000 convertible option.

When Motor Trend tested the BMW i8 against the now-five-generations-old Tesla Model S P85+, they found that the two cars had “unimaginably close performance for such disparate vehicle types.”  With the BMW i8’s latest updates, it probably still beats the newest Model S through the corners due to its much lighter weight, but the i8’s less-powerful 3-cylinder engine and 11.6kWh battery + 143hp motor cause it to lose badly in a straight line or at corner exit.

This puts the i8 Roadster at a roughly 2 second 0-60 disadvantage against a car which weighs ~2,000 pounds more, has 3 more seats (BMW is a 2+2 with tiny rear seats, Tesla can be a 5+2 with tiny rear-facing seats), costs $30,000 less, and is more efficient.  This isn’t to say that these cars should be directly compared, since obviously they are vastly different vehicle types and few people will cross-shop the two.  But they are in a similar price range, and the Model S is useful as an example of what electric performance is possible.  The BMW i8’s performance, especially for a car that looks fast, is incredibly disappointing compared to what would be possible if they gave up on that 3-cylinder anchor.

Meanwhile, when the next-gen Tesla Roadster comes out, that performance disadvantage will look even greater, this time compared to a car which is in the same vehicle segment, though the Tesla will cost ~$30,000 more.  This is assuming the i8 doesn’t get an update before then – though it will be due for a significant one by 2021 or so.  Will BMW make the right decision and go electric at that point?

Mostly, I’m disappointed in BMW’s lack of all-electric models since I drove a MINI E in 2009 and thought they were taking BEVs seriously.  They had a lead on all manufacturers except Tesla and Nissan at the time, and they seem to have blown that lead.  Currently they sell no dedicated all-electric models – the BMW i3 can be configured as all-electric but it was designed as a plug-in hybrid platform (and it is a great implementation of a plug-in hybrid platform).  There’s a lot of big talk about cars coming out in the future and press releases about all-electric concepts, but as I often say, “you can’t drive a press release.”

So let’s put rubber on the road, BMW.  Make your futuristic car as futuristic on the inside as it looks on the outside.