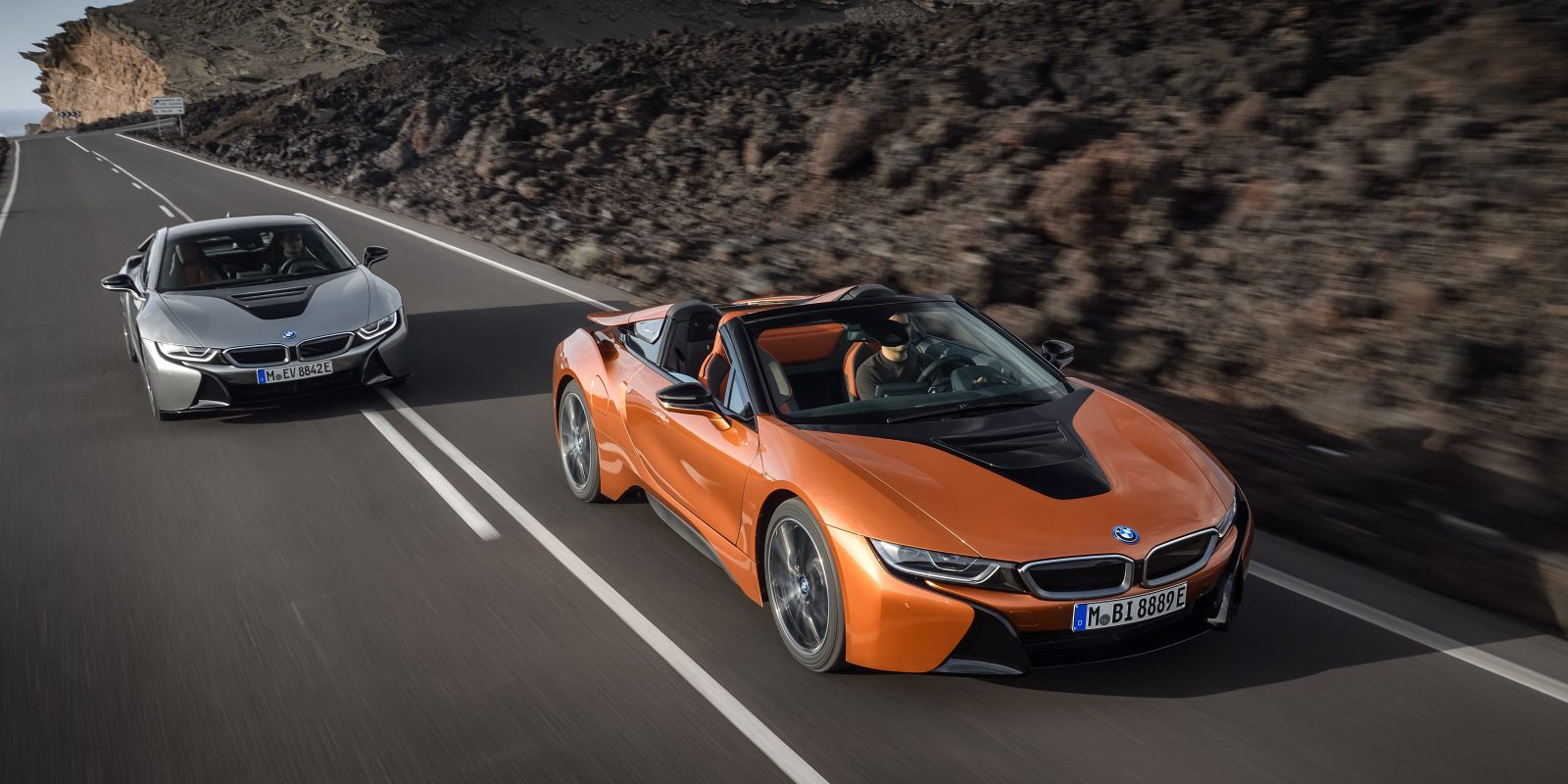 BMW made the plug-in hybrid i8 sports coupe part of its electric ‘i’ brand despite the fact that it is barely an electric vehicle with only about 15 miles of range.

At the Los Angeles Auto Show today, the German automaker is unveiling an updated version of the vehicle with a slightly bigger battery pack for more range and a new roadster version to go with the coupe.

They are claiming a range of 33 miles (53 km) with this new battery pack, which feeds a 105 kW/143 hp electric motor driving the front wheels and there’s a three-cylinder petrol engine with BMW TwinPower Turbo powering the rear wheels for an all-wheel-drive system.

The design of the coupe remains fairly unchanged from the almost 4-year-old version, but the open-top roadster is the new long-awaited version of the plug-in vehicle.

It features a soft-top that covers a large area. The roof is all-electric roof and it opens and closes very quietly – at the touch of a button, according to BMW. It takes about 15 seconds and it can be activated while traveling at up to 50 km/h (31 mph).

The soft-top stows away in the back while creating around 100 litres of additional storage space behind the seats, according to BMW.

BMW says that they have made improvements to their carbon-fibre-reinforced plastic technology that found its way into the new models.

The interior has also been updated with new options for materials and it comes standard with “Navigation system Professional, BMW Display Key, and Driving Assistant incl. Surround View.”

A new heads-up display is offered as an option:

BMW has not released any information about pricing for either the new roadster or the new version of the coupe, but the latter used to start at $135,000.

We should have more information by the time the vehicle hits dealerships, which should be in May 2018, according to BMW.

I’ve always been a fan of the somewhat controversial design of the BMW i8 and I still am with this new version and especially with what they did with the new roadster.

With that said, I am not a fan of their eDrive hybrid powertrain and this slight update is certainly not impressive.

It’s unsurprising that sales have been limited to ~2,000 units in the US and they have been declining over the last year.

There’s no reason why they couldn’t make a dual motor all-electric version with much better performance even if it ends up a little more expensive.

This year’s version would have been a good opportunity to do that and beat Tesla’s upcoming next-gen Roadster to market, but instead, they decided to go with a weak powertrain upgrade after over 3 years on the market.