Astronomers spot Starman and his Tesla Roadster floating through space 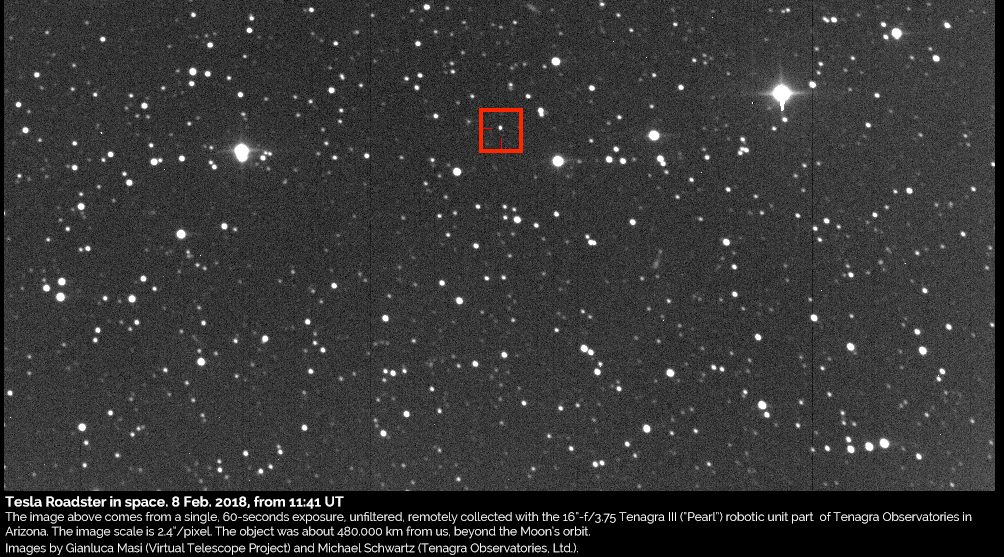 After this week’s planned Falcon Heavy test launch with a Tesla Roadster as ballast, the world was treated to some incredible images of the car, with driver, orbiting the Earth.  Tesla and SpaceX CEO Elon Musk had the good sense to attach multiple cameras to the car so everyone could see what was happening up there, and the images did not disappoint.

Now, a couple days later, astronomers at an observatory on the ground have given us a different view of Starman and his Tesla Roadster – a tiny dot speeding along amongst the stars on its journey towards the asteroid belt.

According to Masi, the Roadster was easy to spot, with an apparent magnitude of 15.5 – comparable to the maximum apparent brightness of Pluto’s moon Charon.  This isn’t all that bright compared to everything else in the sky, but when the object is moving rapidly compared to the rest of the stars behind it, it’s a lot easier to track.

At the time of the photos, the Roadster was about 470,000km (290,000 miles) away from Earth, already beyond the orbit of the Moon.  That’s quite a distance to cover, given that it had been on the move for only about 33 hours when the images were taken.  That puts the Roadster at an average speed of somewhere just under 9,000mph, or around 14,000km/h.  Incidentally, this is over 30 times faster than the top speed of a Bugatti Veyron.

While it can’t be seen with the naked eye at this point, Masi states that it only requires about a 16″/400mm (or larger) telescope to see.  While this is out of reach of casual stargazers with entry-level consumer telescopes, more serious hobbyists or stargazing clubs may still be able to see it with a large, thousand-plus-dollar backyard rig like those in the links above.

Of course, you still need to know where to point the telescope if you have one.  Thankfully, NASA and JPL track this sort of thing, and the trajectory data for “Tesla Roadster (AKA: Starman, 2018-017A)” is publicly available on JPL’s HORIZONS web interface for tracking ephemerides (moving objects) within the solar system.  To find it yourself, click “change” next to “target body” and search for “Tesla,” then click “SpaceX Roadster,” and “generate ephemeris.”