Tesla Model 3 vehicles spotted on their way to Germany, presumably to be reverse-engineered 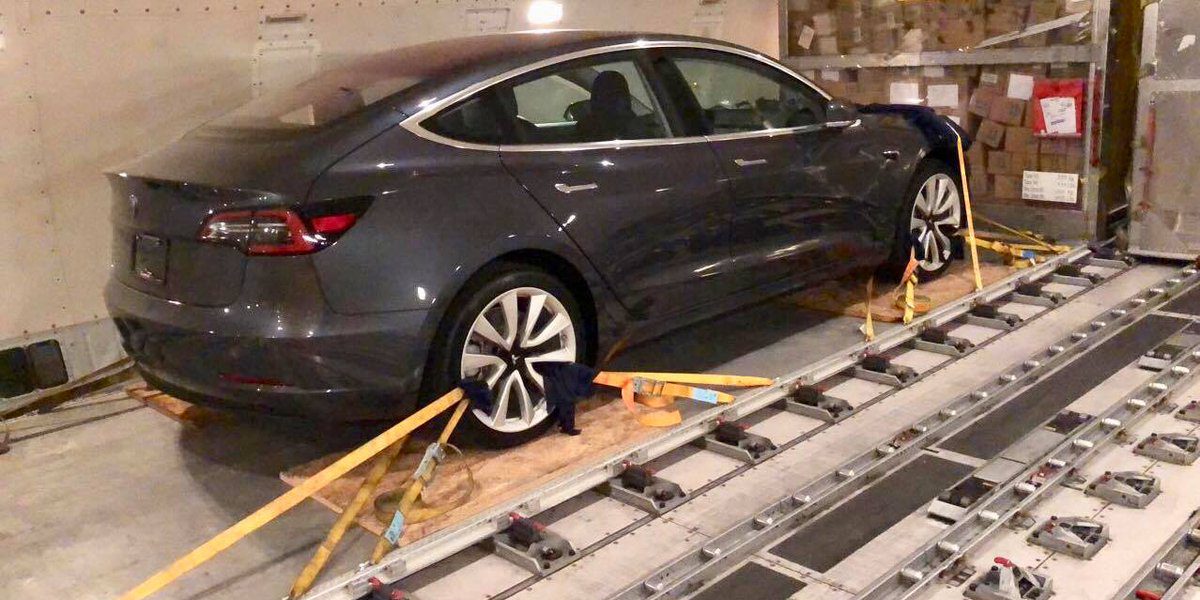 The Tesla Model 3 has been shaking up the industry ever since it was unveiled in 2016 and it received over 400,000 reservations. And now that the electric vehicle is in production, other automakers apparently want to see what it is made of.

Two Tesla Model 3 vehicles were spotted in air freight inbound for Germany – presumably to be reverse-engineered.

It wouldn’t be the first time.

Last year, Mercedes benchmarked and dismantled a Tesla Model X in the weirdest way ahead of launching its own electric SUV.

A year earlier, Audi did the same thing to the Model X, but they did it by buying their own Model X in the US before it was available in Europe.

It’s clear that German luxury automakers are interested in what Tesla is doing since the Model S has been seriously disrupting a car segment that they had been dominating for decades.

The images were shared with the hashtag “Leipzig”, which is a hub for BMW in Germany, but there’s also a DHL sticker referencing Stuttgart, which is home to Mercedes-Benz and Porsche.

BMW plans to launch a Model 3 competitor in 2021, while Mercedes has no clear plan to launch an electric vehicle in the mid-luxury sedan segment, but it plans to launch a series of all-electric cars under its new EQ brand – starting with the EQC SUV next year.

Porsche doesn’t seem to have plans to compete with the Model 3, but its Mission E is aimed at the Model S and should hit the market next year.

Last year when the very first Model 3 vehicles started showing up on the used car market with crazy high premiums, we speculated that only other automakers would be interested to pay $100,000+ for the vehicle in order to benchmark and reverse-engineer it.

Since the first Model 3 deliveries were for Tesla employees and company insiders, it could have been difficult for any competitor to put their hands on the vehicle, but now that Tesla started deliveries to regular customers and more people tried to flip them on the used car market while supply is limited, it’s a different game.

I wouldn’t be surprised if those two vehicles end up being tested and teardown by German automakers. Hopefully, they learn a thing or two and it helps them accelerate their own EV programs.

A quick note for them though. They should know that the vehicles are spec-ed for the US with Tesla’s proprietary connector. Audi apparently didn’t know that when they imported a Model X for the same reason and an engineer was spotted stuck at a European Supercharger station, which uses the Type 2 plug.