Here are some of the first Tesla Model 3 crashes

With more Tesla Model 3 vehicles on the road, crashes are inevitable and now we learn that the first few accidents have already happened.

One of the earliest Model 3 owners goes by “Model3guy” on Instagram and he posted a quick account of an accident that happened “a while ago”, but he is posting it now that he is getting back his electric vehicle:

“Crashed my Model 3 a while ago and I am excited to get it back next week! Thankful we were going slow and no one got hurt. Woopsy!”

Pictures of the aftermath shows that the driver lost control on a snowy road and crashed into large rocks on the side of the road (pictures via Instagram): 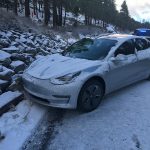 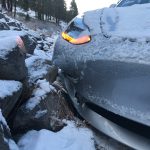 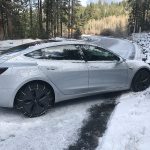 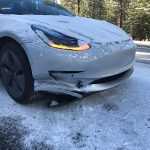 The owner says that it was just a “flesh wound” so we are only talking about body work.

The Model 3 was equipped with winter chains on the rear wheels and it looks like a problem with traction led to the accident, which is a good reminder that nothing beats good winter tires.

It’s apparently not the only Model 3 crash to date. Another early Model 3 owner claims to have hit a deer at 45 mph in their Model 3. They wrote Elon Musk and Tesla on Twitter:

Thank you @elonmusk and @Tesla for designing a well-built, safe vehicle. We struck a good sized deer in our #Model3 at 45 mph and everyone was well protected. The damage is illustrated below. We have full confidence in Model 3! pic.twitter.com/gvcmkiuVwW

To be honest, I am surprised here. Unless it was one of those inflatable deer, I’ve never seen hitting a deer make so little damage, especially at 45 mph.

It doesn’t give us much insight into the vehicle’s safety yet, but Tesla claims it will prove to be top-of-the-line.

Hopefully, we will start to see some crash test results from third-parties next year.