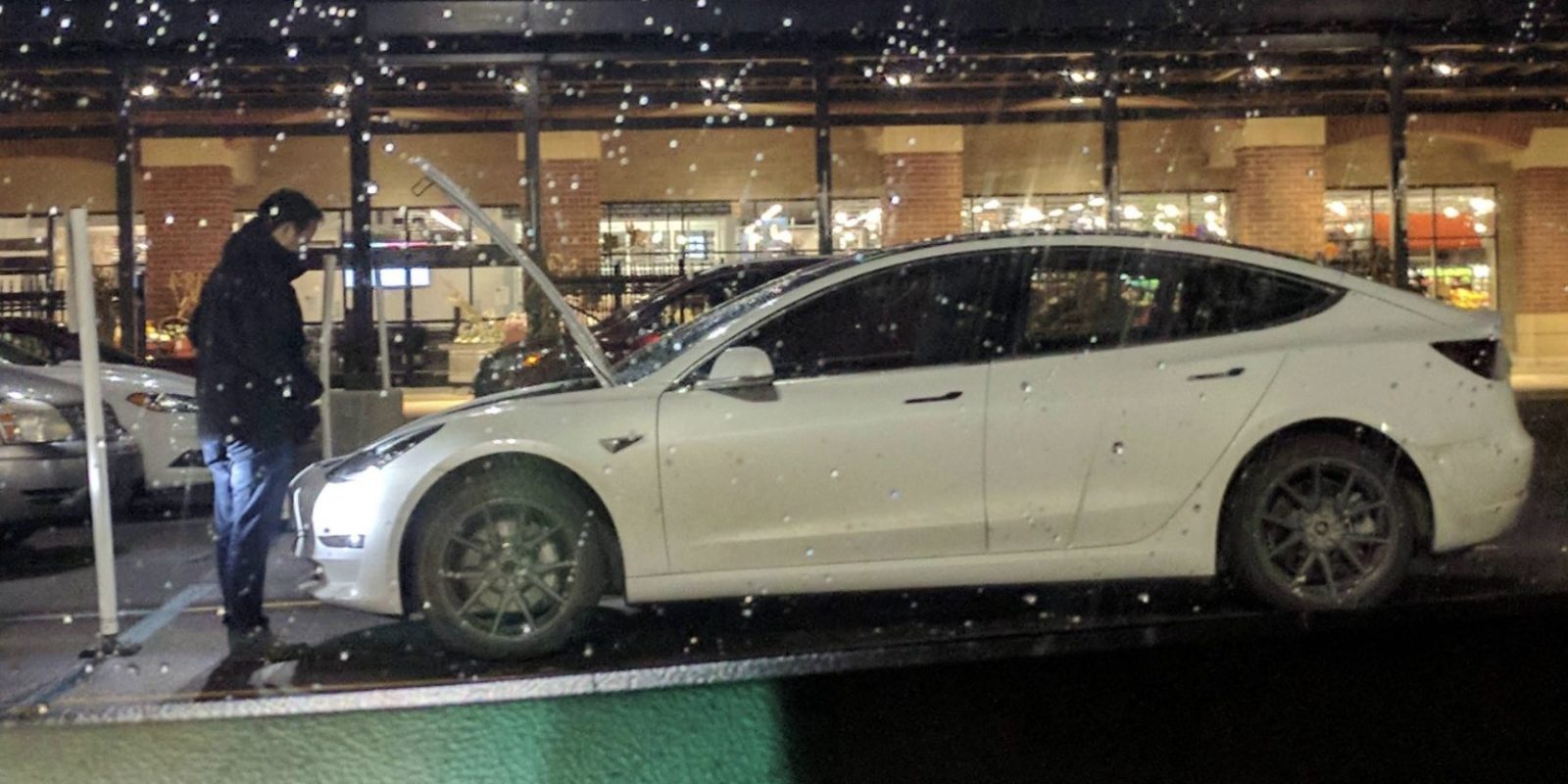 Tesla hasn’t managed to significantly ramp up Model 3 production yet which results in still only a few vehicles outside of California.

But one apparently made it all the way to Detroit – making it likely the first Model 3 in the home of the American automotive industry.

The new all-electric vehicle was spotted by Redditor XxRoyalxTigerxX on /r/TeslaMotors at Busch’s in Canton, Michigan just outside of Detroit.

He said that it had a California license plate. It wouldn’t be the first time that a Model 3 was driven from California to the other side of the country, but that’s not what is most interesting about this Model 3 sighting.

The Model 3 apparently broke down and locked the driver out:

“The car seems to be locked out and dead, and owner/possibly an engineer is trying to jump the car to try and open it. He keeps leaving the hood open when he puts it down, so I think the car is completely locked out.”

He shared two pictures of the situation:

The redditor says that the driver couldn’t open the doors so he accessed the frunk using the 12-volt power supply located behind the tow hook. They jumped the Model 3 using another vehicle seen on the second picture above.

We learned about the access through the Model 3 first responder guide released last month:

The redditor added that he watched the driver trying to enter the vehicle for 15 minutes or so without success.

The issue is reminiscent of the frequent 12-volt battery problem that Model S had for the first few years of production.

While Tesla’s electric vehicles are equipped with large high-voltage li-ion battery packs, they still rely on the same old 12-volt lead-acid batteries to power critical systems like accessing the car – just like a gas-powered car.

In Model S, it generally wouldn’t result in being locked out of your car or the car not functioning since a “12-volt battery needs service” alert would pop up and would then be replaced. It had more to do with the battery being depleted more rapidly than expected rather than not working entirely.

Again, it’s reminiscent of the same issue, but we can’t confirm that it’s what happened to this rare Model 3 in Michigan.

Anyway, that’s partly why Tesla reserved its early Model 3 production to employees and company insiders. They basically serve as beta testers to identify issues with early production cars before they hit regular customers.

As we previously reported, Tesla had to change several parts in early Model 3 production units as it fixes issues while attempting to increase production. We expect an update on the current status of Model 3 production tomorrow after Tesla’s third quarter financial results.