Nissan will manufacture the new all-electric Leaf in Japan, the US, and the UK

Nissan has confirmed its manufacturing plans for the next-generation Leaf unveiled earlier this week.

The Japanese automaker hinted at a potentially significant increase in production volume with the new vehicle, but as they are now confirming their production plan, it looks like they are still gauging demand.

After confirming the start of production at their Oppama plant in Japan at the launch on Tuesday, Nissan confirmed today that Nissan’s Vehicle Assembly Plant in Smyrna, Tennessee, and the Nissan Motor Manufacturing (UK) Ltd. in Sunderland, U.K., will start production of the new Leaf by the end of calendar year 2017.

“We’re proud to continue manufacturing the Nissan LEAF at three plants globally. The Nissan LEAF is the icon of Nissan Intelligent Mobility with its many advanced technologies. Nissan employees in Oppama, Smyrna and Sunderland are excited to continue producing the most popular electric vehicle in the world.”

Here’s an overview of Nissan’s manufacturing plans for the new Leaf: 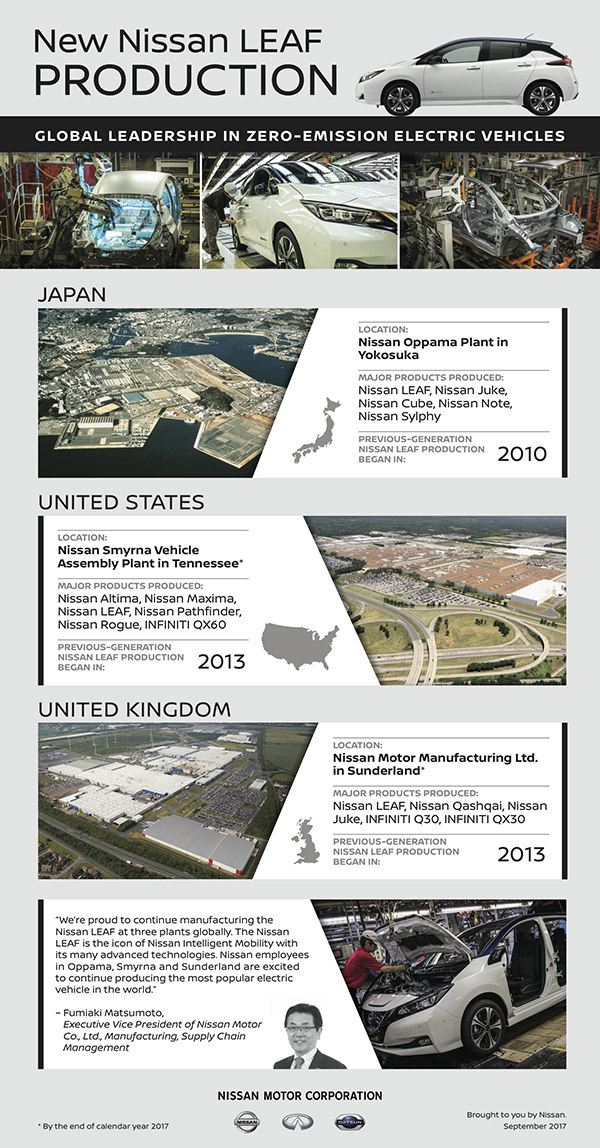 At first glance, it looks like the manufacturing plans didn’t change between the last and new generation of the all-electric Leaf.

But the company suggested that they are ready to increase their output if the demand is there.

While it is definitely a significant upgrade over the previous generation with now 150 miles of range, an advanced semi-autonomous driving system, and power upgrade, it still not clear how big the demand will be for the vehicle.

Since the car is not arriving in the US until next year, Nissan decided to start taking reservations in order to gauge demand – though they are also incentivizing the reservations with free Apple Watches and Go-Pro cameras (only after converting a reservation into an order).

Depending on how that process goes and early demand in Japan, we could see Nissan updating us with new production targets. The global Leaf output averaged roughly 50,000 units annually throughout the production of the first generation, but Nissan is believed to be able to significantly increase that number with its current plants.

Nissan received a $1.4 billion loan granted by the U.S. Department of Energy to build the Leaf at its Smyrna factory in Tennessee. At the time, they were talking about a capacity of up to 200,000 electric vehicles per year, but the plant never reached anything close to it with a peak of ~30,000 Leaf sales in the US.

Maybe the new Leaf will enable them to make better use of their Smyrna factory? What do you think? Let us know in the comment section below.